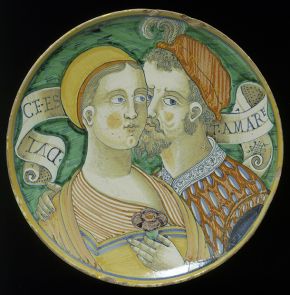 Tin-glazed earthenware plate with the inscription ‘Dulce est amare’ (Sweet is love), from the workshop of Giacomo Mancini, Deruta, Italy, about 1550. Museum no. C.2116-1910, © Victoria and Albert Museum, London

Young brides were often given pairs of marriage chests, known as cassoni, to hold the linens and clothes they brought with them to the husband's house. The bride and female members of her family would make sheets, shirts and other linen goods, while the groom and his family gave special items of clothing such as sleeves. The cassone was the basic item of furniture in all but the poorest Italian homes. The most common type was made of carved walnut. Marriage cassoni were as richly ornamented and expensive as the purchaser could afford. Placed in the bedchamber, they were lined with fabric or leather to protect the contents. Cassoni with flat lids would have been used as benches or placed alongside the bed as a low table.

A traditional part of the wedding ceremony was the nuptial parade through the streets to escort the bride from her father's house to her new home. Up to the mid-15th century, wedding chests were commissioned by the bride's father and accompanied the bride in her cortege; indeed, they often included a depiction of a procession just like their own progress through the town. During the second half of the century, cassoni began to be bought by the groom's family. From about 1475 onwards they were usually placed in the nuptial chamber without being displayed in the wedding procession first.

'The Continence of Scipio', from the workshop of Apollonio di Giovanni, Florence, Italy, about 1463-5, poplarwood cassone panel painted in tempera. Museum no. 5804-1859, © Victoria and Albert Museum, London 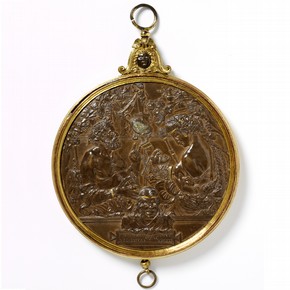 Bronze mirror inlaid with gold and silver, possibly by Cristoforo Foppa, known as Caradosso, Mantua or Milan, Italy, about 1495-1500. Museum no. 8717:1-1863, © Victoria and Albert Museum, London

Mirrors were greatly prized, though they were usually made of steel until about 1500, when the art of making flat sheets of clear glass was developed. Glass mirrors were available before this, but they were expensive and convex in shape, reflecting dark and distorted images. This added to the mystique of the mirror, which was considered an almost magical object. People felt unsure about its reflective powers: they believed that mirrors generated light; they feared that spirits might be looking out of a mirror; or that the mirror might lose its capacity to reflect images. To avoid this, and also for protection from dust and dirt, mirrors were often covered with a curtain or wooden panel when not in use.

A bronze mirror thought to be by the goldsmith and plaquette-maker Caradosso, was probably given as a wedding gift. It depicts a satyr and a bacchante beneath a herm of the fertility god Priapus. It is inscribed in Latin NATVRA FOVET QUAE NECESSITAS VRGET (Nature encourages what necessity demands). The overall theme is one of fertility and reproduction, which would have made it an appropriate gift for newlyweds.

A paper cutting from an encrypted letter, which seems to have come from the secret diplomatic archives of Milan, was found in the mirror in the late 1950s. This suggests that the mirror was possibly made in Milan, where Caradosso was working between 1475 and 1505. It may have been used to transport the letter, under the guise of a wedding gift. The mirror is now known as the 'Martelli' mirror because it was owned by the Martelli family until 1863. However, it is not clear how long it was in the family collection. 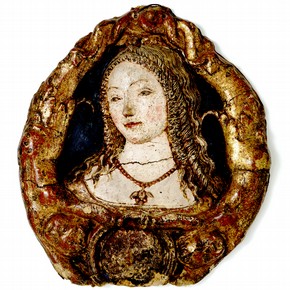 Mirrors such as the example from the workshop of Neroccio de’ Landi were given to women by their groom at the wedding, or earlier on in the courtship. Such objects were kept for future generations to remind the viewers of the family alliances and social networks created through marriage. Hung on the wall in the main bedroom or dressing area, its frame would have overwhelmed the small round glass at the bottom.

The female face decorating the mirror was not meant to represent the recipient of the gift but was a generic idealised head based on notions of beauty in Renaissance Italy. The girl has pale skin and dark eyes, which were thought to signify beauty. Blonde hair was also considered beautiful, and the figure's hair now appears to be blonde, but this is due to the paint having been removed, so revealing the under layer of white gesso (plaster). The necklace and the jewel that decorate the girl's hair may refer to the presents that were given to the bride as part of the courtship process after the betrothal. Though make-up was often frowned upon by the religious authorities, women continued to use lipstick, blusher and a face-whitener made with lead. In Florence a high forehead and arched brows were considered attractive, and women plucked their hairlines to achieve a fashionable look.