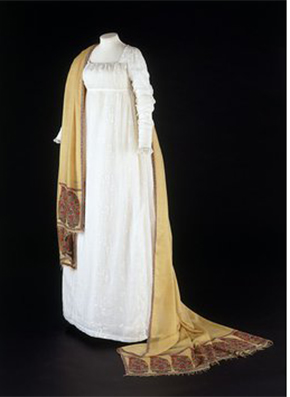 In collaboration with Jenny Lister, Curator of Nineteenth Century Textiles and Dress, Sonia Ashmore is preparing a book on the V&A’s collections of more than 600 shawls. Nearly all of these are in storage, although now more accessible at the V&A Clothworkers' Centre and, increasingly, via the website. The shawls are both South Asian and European (predominantly British). The earliest examples of British shawls show the efforts of weavers in Spitalfields, Norwich, Edinburgh and Paisley to compete with the highly desirable originals imported from India. As with other textile commodities, the development of the European ‘imitation’ shawl had a significant economic impact on producers in Kashmir as well as on the weaving industry in Britain. Besides this other areas considered are production and design, the retailing and consumption of shawls, their use as a vital part of women’s wardrobes in the west for much of the 19th century and the fate of shawls after they fell out of fashion.

Sonia is also contributing a chapter to the catalogue of an exhibition of Meiji period embroideries to be held at the New Orleans Museum of Art, 2015.

With two colleagues Sonia has just completed the second stage of cataloguing nearly 3000 Indian textiles that came into the V&A from the Indian Museum in 1880. The project was funded by the Bonita Trust. All these objects are, or will soon be, available on Search the Collections.