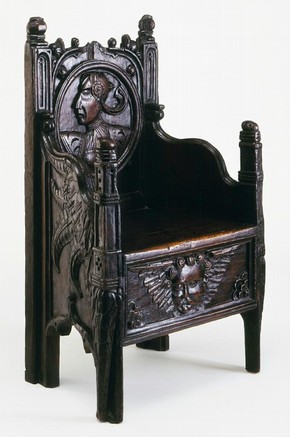 The Renaissance style was inspired by the art and architecture of ancient Rome. It originated in Italy in the 14th century and gradually spread across the whole of Europe. The new styles of decoration came to England in the 16th century. Engraved books of Renaissance motifs provided an important source for English designers. Foreign artists and artisans working in London were also influential in introducing the style.

The Grotesque was a style of decoration based on ancient Roman wall paintings discovered in Italy in the late 15th century. It featured a combination of scrolling plants, figures, fantastic creatures, masks and vases.

Strapwork resembles flat strips of leather, bent to suggest bold, three-dimensional shapes. It appeared frequently in English design in the 16th century. Strapwork was often used to frame other motifs or architectural features.

The Moresque was a type of decoration associated with the Moors of North Africa and Spain. The interlacing patterns of stems, leaves and tendrils were a common characteristic of Renaissance design.

Busts of men and women depicted within a circle, known as a roundel, were a popular feature of the Renaissance style. They were often shown in profile. This decorative motif originated on ancient Roman coins.

The arrival of Renaissance culture in England created a renewed interest in the stories and characters of Classical mythology. These were often shown in prints and paintings and used as motifs on objects.

Henry VIII became king in 1509. He was a great patron of the arts and his court was one of the richest and most magnificent in Europe, rivalling those of other monarchs. Many of the luxury objects made for Henry and his court show the influence of new ideas from Renaissance Europe. The king also employed many foreign artists for the building and decoration of more than 50 royal palaces. Henry VIII used the splendour of his court to demonstrate his power.

Sebastiano Serlio was an Italian architect, painter and theorist. He wrote one of the most influential series of architectural books of the Renaissance. The books, published from 1537, recorded the buildings of antiquity and promoted the Classical style for exteriors and interior features such as ceilings and fireplaces. The bold illustrations meant that Serlio's volumes could easily be used as pattern books by artisans working across Europe. In England they had an enormous influence on a wide range of architects and designers.

Jan Vredeman de Vries was a Flemish designer, architect and painter. His work became widely known in Europe through published engravings. His architectural designs had a great influence on the buildings and urban planning of northern Europe. He also produced numerous exuberant designs for Renaissance-style ornament. These provided a vast repertoire of motifs for designers working in many media. In England Vredeman de Vries' strapwork designs were used for doorways, decorative panels, overmantles and gables.

Hampton Court was one of Henry VIII's favourite palaces and he spent a great deal of money on it. The palace was constructed in a traditional style, but many of the details reveal the influence of the new Renaissance ornament. The Great Hall, one of the magnificent public rooms still in existence, has a splendid hammerbeam ceiling incorporating the royal arms with rich Grotesque decoration.
www.hrp.org.uk/HamptonCourtPalace

Kirby Hall was built between 1570 and 1575 for Sir Humphrey Stafford. He was a fairly minor figure at the court of Queen Elizabeth I, but his house was very grand. It was one of the first buildings in England to employ Renaissance principles of Classical architecture. This is seen in the symmetry of the plan and in the decoration. The richly decorated porch features two of the Classical orders: the Ionic with its distinctive scrolling capitals on the ground storey and the elaborate Corinthian above. Kirby Hall was altered and enlarged in the 17th century.
www.english-heritage.org.uk/daysout/properties/kirby-hall

Wollaton Hall, designed by Robert Smythson, is one of the great houses of Elizabethan England. It was built in the 1580s for Sir Francis Willoughby, who had made his money in coal. Both the exterior and interior of the house are richly decorated with Renaissance motifs. The plan, with its central hall and chamber above, was taken from one of Serlio's books on architecture. To this Smythson added a mass of other details. Many of these, such as the strapwork gables, are inspired by the work of Vredeman de Vries.

Renaissance design was one of the sources of the 18th-century Neo-classical style. In the 16th century engraved books of decorative motifs had provided inspiration for British artists and designers, but in the 18th century they were able to visit Italy and see the Classical and Renaissance monuments for themselves. New archaeological discoveries also provided important sources for the style.

In the second half of the 19th century there was a great revival of interest in Renaissance art and design and in the Classical forms and motifs that had inspired it. By this time knowledge of the Classical world had been dramatically increased by various archaeological discoveries in Italy and in Greece.