The Conscription of the Arts during the Cold War 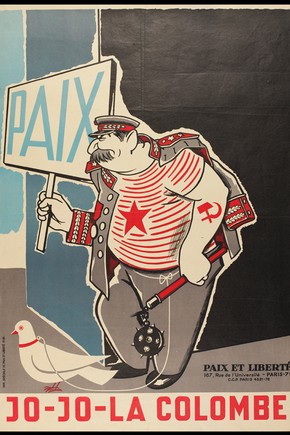 Artists and designers played a central role in the Cold War battle of images. Their work was conscripted for propaganda, and their actions and opinions prized.

In the late 1940s the formation of one-party states under communist rule, and the imposition of Socialist Realism throughout the Eastern Bloc, disappointed hopes for the freedom of the modern artist or the designer in the East. Only in socialist Yugoslavia, where Moscow's influence was quickly rejected, could modernism flourish.

In western Europe, abstract art and functionalist design were often aligned with progressive ideals and a new moral purpose, particularly in the new state of West Germany.

Socialist Realism in the Eastern Bloc

Socialist Realism was established as the compulsory artistic creed in the Soviet Union in the 1930s. Works had to display clearly defined political content and a heroic style, and artists and architects were prohibited from exploring abstraction or other qualities deemed 'formalist'. The style was imposed on the newly formed Eastern Bloc in the late 1940s.

The politics of peace

Although peace was a genuine ideal shared by many, it was the subject of considerable Cold War controversy. Soviet politicians put peace at the heart of their rhetoric, despite their aggressive grip on Eastern European societies. Nevertheless, many artists and designers - in the East and West - lent their creativity to the cause of peace.

The competition to be modern

In the period following Joseph Stalin's death in 1953 and the rise of his successor, Nikita Khrushchev, new fronts of Cold War competition opened up.

Soviet leader Khrushchev promised the watching world, and his citizens at home, that the Soviet Union would 'catch up and overtake' America.

The West picked up the challenge. At the American National Exhibition in Moscow in 1959, US Vice-President Richard Nixon challenged Khrushchev: 'Would it not be better to compete in the relative merits of washing machines than in the strength of rockets?

Revelations about the brutality of Stalin's rule by his successor Khrushchev in 1956 led to a period of considerable change in the Eastern Bloc, known as the Thaw.

Demands for freedom of speech and the extension of democracy escalated into fierce protests in Poland and a revolution in Hungary, suppressed with Soviet tanks.

To assuage dissent, communist leaders throughout the Bloc addressed the problems of living conditions. Designers and architects were commissioned to create bright new homes and prototypes for modern consumer goods.

This content was originally written in association with the exhibition 'Cold War Modern: Design 1945-70', on display at the V&A South Kensington from 25 September 2008–11 January 2009