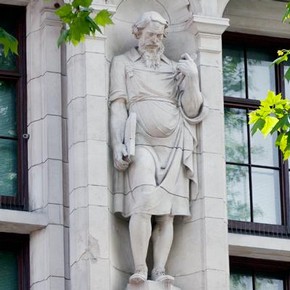 Imaginary portrait of Thomas Chippendale on the Exhibition Road façade of the V&A, Albert Hodge, 1906

Thomas Chippendale was born in Otley, Yorkshire, 1718 and died in London in 1779.

Chippendale was an only child, born into a family of Yorkshire carpenters. Details of his early career are unknown but in 1748, aged 30, he moved to London where he set up as a cabinet-maker, married and had a large family.

In 1754 he published The Gentleman and Cabinet-Maker’s Director, a pattern book that was to secure his position as one of the most eminent cabinet-makers of the 18th century. Chippendale’s workshop was on St Martins Lane, the newly fashionable centre of the furniture making trade in London. From there he undertook many large-scale furnishing projects for grand houses throughout Britain.

In the 18th century there was an increasing demand for luxury goods. Chippendale’s Director provided for this market with 160 engravings of fashionable furniture designs. 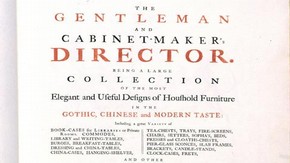 Title page of the 1754 edition of The Gentleman and Cabinet-Maker's Director. NAL no. III.RC.N.10

Published by subscription, The Director was an instant success. It was reissued in 1755, and again in 1762 with additional plates in the new Neo-classical style. Subscribers included aristocrats and cabinet-makers. Shrewd publicity brought Chippendale many lucrative commissions. His firm supplied all manner of furnishings and household equipment.

So influential were his designs, in Britain and throughout Europe and America, that ‘Chippendale’ became a shorthand description for any furniture similar to his Director designs.

Furniture designs had been occasionally published before 1754, but Chippendale’s Director was the first publication on such a large scale. It included designs in the ‘Gothic, Chinese and Modern Taste’ – the last meaning French Rococo style. 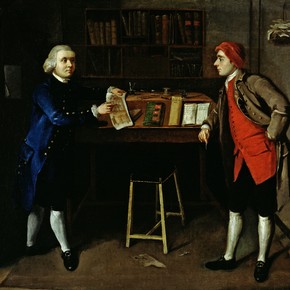 Not all furniture supplied by Chippendale exactly followed his published designs. Many were simpler pieces for bedrooms and private spaces. Patrons could also combine Director elements to create bespoke commissions. For Dumfries House in 1759 only 12 of the 50 items ordered came from The Director.

Despite his success, Chippendale never received a significant royal commission, unlike some of the other cabinet-makers in St Martin’s Lane.

Chippendale’s business grew quickly. By 1755 his workforce comprised 40–50 artisans, including cabinet-makers, upholsterers and carvers. Chippendale would not have made furniture himself – or even managed the workshop. His role probably involved making designs, cultivating clients and promoting the business.

My name is Peter Holmes and I’m a furniture conservator in London.

Well, every restorer, every conservator of English furniture will have taken apart a chair like this. And these are chairs - imagine they were made in the middle of the 18th century - they would have been around many tables, many dinner parties, people very drunk, rocking back on them, many of them would have broken. But actually, the ones that do survive, most of all, are these ones with the H-shaped stretcher.

For a restorer, the issues that he would tackle on such a chair would be the upholstery failing, the webbing which supports the stuffing failing, the seat rails having woodworm damage and tack damage which would weaken the structure, and then the general loosening of the joints. The joints are all glued together with Scotch glue, which is a reversible, thermo-plastic animal glue. It’s a glue made from animal bones and horns, which is melted down. But it’s the restorer’s friend because a restorer can warm the joints gently and the animal glue - from animals in the middle of the 18th century - softens and the joints slide apart. You then deal with any fractures and breaks and then you re-glue it back together again using the same glue. And hopefully it will be sound for many years to come.

In large workshops, like Chippendale’s workshop, or similar workshops around the country, these people were doing it all of their lives. I mean their skill and alacrity was extraordinary. The carving on this particular chair is actually very well done. If you look at the very fine C-scrolls on it, if you look very carefully, there’s a slight hollow in the centre of these C-scrolls that runs around the cresting rail, on the top there. Very subtle. A lot of these surfaces - straight off the carver’s chisel - when they were finished and presented to the client they would have been quite sharp actually. I mean they weren’t using sandpaper then. They had some abrasives but not as we know them today. And they might have had an oiled finish or a varnished finish. But it would have been bright red in colour, or deep red in colour, I should say. The piercing of the chair back and the carving is joyful, actually. It gives me great pleasure.

Leela Meinertas, Curator in the Department of Furniture, Textiles and Fashion at the V&A, discusses a Thomas Chippendale corner cupboard

My name’s Leela Meinertas and I’m a curator in the Department of Furniture, Textiles and Fashion at the V&A.

The word in itself, Chippendale, is such an emotive term. I mean people go mad about Chippendale, and in the auction rooms a real documented piece of Chippendale, where you can guarantee it’s by him, goes for millions. He had upholsterers, carvers, japanners. He had people hanging curtains. He could even supply you with a night watchman who would watch the gate. It was a one stop furnishing outfitters, if you like.

Now, opposed to the standard brown wood chairs that people associate with Chippendale, if you were to see this corner cupboard, you wouldn’t immediately think it is by Chippendale. It’s a French idea, it was called encoignures. They were usually made in pairs. So you would have your commode in the middle of the wall and then these two in the corners.

Now, we know - there is so much documentation on this corner cupboard - that we know exactly who it was made for. It was made for the very famous actor-manager David Garrick for his villa in Hampton. Garrick was fantastically wealthy, for an actor, and he had Chippendale design masses of furniture. He was a very, very big client of his. And it’s in what we call the Chinoiserie style and it’s japanned, which means, basically, it’s painted. Now, in the villa in Hampton, we know that when Garrick first moved in, in the 1750s, it was already decorated in this Chinesey style with painted panels and canvases. So it looks likely that Chippendale continued this trend. And this could have been bought white and then painted on later, and there are some wonderful letters from Mrs Garrick where she complains bitterly about why she’s been charged so much for painting something that she felt she’d already paid for before. And there are then letters back to her saying, ‘Oh, but you know, we haven’t paid your bill and we’re going to get the lawyers get mentioned’.

But Chippendale just happens to be the most famous name. There were other very, very competent makers at the same time.

In this display are a corner cabinet and a side chair – what we nowadays think of as a dining chair. The corner cabinet was a special commission directly from the renowned cabinet-maker Thomas Chippendale, while the chair was made following one of his published designs. One of Chippendale’s great innovations was to produce a pattern book, The Gentleman and Cabinet-Maker’s Director, published in 1754, which was used by many other furniture makers.

The chair to the right was made by an unknown cabinet-maker using one of Chippendale's designs. The years have darkened its mahogany frame to a deep, dark brown, glowing richer red where the wood’s been repeatedly handled. The seat has been re-upholstered in charcoal grey horsehair. The chair is generously proportioned. The front edge of the seat bows out, the fabric fixed by two rows of upholstery nails, round heads touching, so it looks like continuous brass beading. The front legs are straight and square cut. The rear legs splay out slightly at the back. An H-shaped stretcher joins the four legs for stability.

The focus of Chippendale's ornamental design is the chair back. The back is wider but flatter towards the top. The front surface is ribbed, edges rounded, creating a sense of graceful movement away from the solidity of the base. The top of the chair back – the cresting rail – is carved in a series of shallow waves, punctuated by bell-like flowers and leaves. A low rise in the centre, behind the sitter’s head, is pierced by a hole – formed by two large letter Cs cupped towards each other – surrounded by a carved sunburst of licking flames. Joining the rail to the seat, a vertical panel known as a ’splat‘ is shaped like a tall, slim vase, finely carved with elaborate sweeping curves and overlapping scrolls.

The corner cabinet to the left was commissioned from Chippendale by the famous 18th-century actor David Garrick as part of a suite of bedroom furniture. It's strikingly painted to imitate Chinese wallpaper – leaf green decoration on a white background. Nearly a metre high, the cupboard is three sided. Its bowed front is mostly taken up by the door, whose bottom edge forms a curve between the two tapered front legs.

Over the years the white base paint has yellowed, and many of the green motifs – especially on the cupboard top – have been scraped and smudged as to be almost unrecognisable. Those on the bowed front have fared better. Here trees cluster on a hill; a small hut sits by a stream; a pagoda stands behind a bamboo fence. To the right, two groups of robed figures seem to be walking uphill towards a summer house with a chequered floor, where a woman is sitting. In the spaces between these vignettes, birds soar.

These images are framed by a narrow border of twining leaves. Either side, a vertical floral design features a flower with narrow radiating petals, and a line of delicate bell-shaped flowers beneath. From top to bottom, each is a little smaller, as though dropping from the centre of the flower above. Although the cabinet is made of softwood and various splits are visible, the original decoration is still light and elegant.