Tunisian Textiles at the Great Exhibition

The first objects made in Africa that were acquired by the V&A were seventeen textiles from Tunisia. They were bought by the museum from the Great Exhibition of the Works of Industry of All Nations. 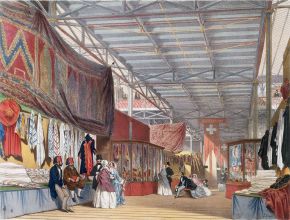 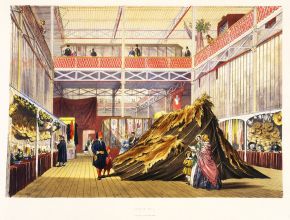 The Great Exhibition, as it was known, ran from May to October 1851. It attracted six million visitors, the highest number of people known to have attended any single event at that time. The success of this event led to the development of the South Kensington Museum which eventually became the V&A. Profits from the exhibition were used to purchase the land the V&A stands on today. In addition, parliament voted £5,000 to the museum to buy items from the exhibition to form the basis of the collection. A small amount of that sum was used to buy a selection of textiles from Tunisia. 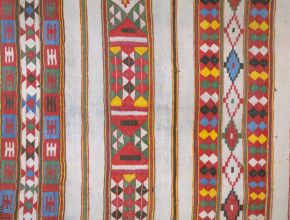 The Great Exhibition was staged in an iconic glass building in Hyde Park that became known as the Crystal Palace. The building was internally divided into two halves: the west side was devoted to the display of manufactures, technologies and raw materials of Britain and her ‘colonies and dependencies’, while the east side was reserved for those of foreign countries.

The second section of the exhibition included the Tunis Stand. The official catalogue of the Great Exhibition wrote of the stand that ‘This large collection of Tunisian productions has been sent by one exhibitor only, in the person of His Highness Mushir Basha, Bey of Tunis’. Although Tunisia was part of the Ottoman Empire, the Beys of Tunis had virtual independence in running the territory.

The centre piece of the Tunisian stand was a large tent covered with fur pelts. Running along the sides of the tent were display cases showing hats, jars, perfume bottles, pots, textiles and items of clothing. The display was designed to convey the impression of a series of small shops or market stalls. 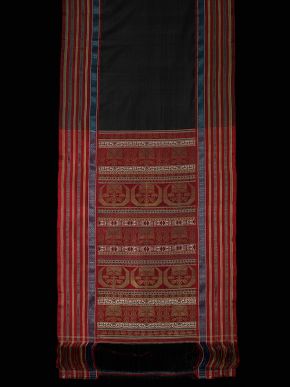 Pictures of the Tunis stand were included in a series of prints produced by Joseph Nash at Prince Albert’s request and published by Dickinson Brothers as a souvenir of the Great Exhibition. One of the images shows Sy Hamda Elmkadden who was in charge of the exhibit and his assistant Saido Belais talking to a small group of visitors to the exhibition. The two men are seated in front of a display of textiles.

A significant amount of the Tunis display was given over to textiles and dress, the official catalogue of the Great Exhibition noted that ‘articles of apparel…constitute one of the most singular and attractive features of this group of objects.’ The museum purchased seventeen textiles from the Tunis Stand including woollen cloaks (bernous), cotton saddle bags, blankets, men’s sashes and a woman’s veil (ajar). The selection reflected the diversity of weaving traditions within Tunisia, from cotton and wool woven in geometric patterns to silk weaving from urban coastal areas.

The examples of silk weaving are particularly interesting. The silk sashes and veil would have been prestigious and expensive garments. The men’s sashes would have been folded lengthways and then wound several times around the waist. The end would be tucked in tightly to secure it. The folds resulting from this process could be used like small pockets.

The woman’s veil has at its centre a finely woven black panel, which is bordered decorated panels of weaving. It would have been worn over the head by a wealthy urban woman while she was outside of her home. The black panel in the centre is sufficiently transparent which allowed the wearer to see out while obscuring her face; the patterns of the border would be displayed by careful draping. A veil like this protected a woman’s modesty but at the same time demonstrated her family’s wealth.

The silk to make the textiles would have been imported in its raw form. Although silk had once been produced locally in Tunisia (the only place in North Africa where this occurred), by the time these textiles were produced in the middle of the nineteenth century, Tunisia was reliant on imported silk. The silk would be cleaned, carded and spun by women and then dyed by specialist craftsmen before being woven.

Silk weaving in Tunisia was very much an urban art form and in Tunis itself there have been specialist silk weaving guilds since the twelfth century. It was done by professional men and apprentices in the workshop of a mu’allim. The mu’allim, as head of a workshop, was responsible for overseeing production and controlled the design of the textile. Complex treadle looms were used to make the textiles and the large number of treadles and shedding devices on the loom allowed the weavers to make subtle and complex patterns.

The patterns show the influence of both Turkish and Andalucian design, reflecting the long history of immigration to North Africa from these regions. Amongst the recurring motifs that can be seen on this sash is hands. Depictions of hands and other designs containing five elements were believed to counteract the effects of the ‘evil eye’. The idea of the 'evil eye' is common across the Mediterranean and centres on the idea that a jealous look can bring bad luck, ill health or even death.