The V&A Textiles and Fashion Collection 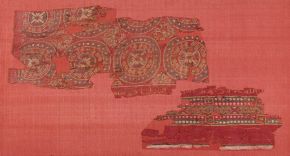 The V&A holds the national collection of Textiles and Fashion, which spans a period of more than 5000 years, from Predynastic Egypt to the present day. The collection is one of the world’s largest and the most wide-ranging. More than 75,000 individual objects or sets of objects are cared for jointly by the Asian Department and the Furniture, Textiles and Fashion Department, from a broad geographic area covering Europe, South, South East, East and Central Asia, the Middle East, Africa and the Americas.

Almost all textile techniques are represented in our collections, including woven, printed and embroidered textiles, lace, tapestries and carpets. Among the particularly rich areas are early woven silks from the Near East, European and Chinese tapestries, English medieval embroidery (opus anglicanum), Safavid carpets, Indian textiles, and Arts and Crafts textiles.

The fashion collection spans five centuries, with early pieces including rare 16th century children’s kaftans from the Ottoman Empire, and important examples of 17th century European men’s and women’s dress. It has particular strength from the 18th century onwards, with mainly European (predominantly English and French) fashionable clothes and accessories for both sexes, together with important items of dress for the elite in India, China and Japan which mainly date to the 19th century. The collection also includes a wide range of accessories from across the world, such as footwear and hats.