V&A Podcast: What was Europe? A New Salon

What was Europe? A New Salon is a series of four conversations, sponsored by the British Academy, marking the opening of the V&A’s new permanent galleries devoted to art and design in Europe 1600-1815.

The new galleries open at a time when the concept of Europe in Britain is politically and culturally contested. The time has never been better then, to ask, ‘What was Europe?’

The conversations take place within a specially commissioned space at the heart of the Europe 1600-1815 galleries called The Globe, designed to evoke the Enlightenment Salon. The Salons enable scholars working across a wide range of disciplines as well as institutions – from universities to art galleries and museums – to come together, share their perspectives, and generate debate. Each Salon is hosted by Lisa Skogh (Research Fellow, V&A), Bill Sherman (Head of Research, V&A) and Simon Schaffer (Professor of the History of Science, University of Cambridge). 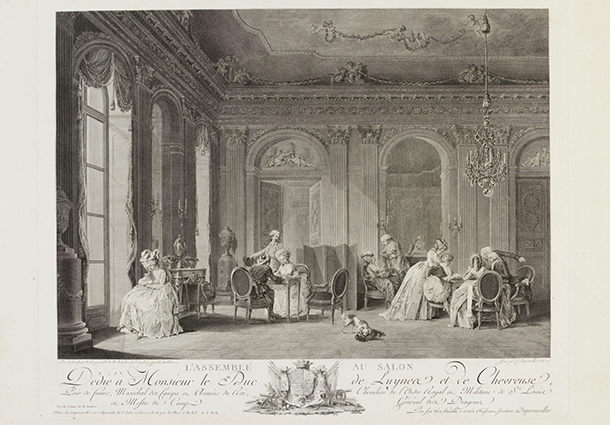 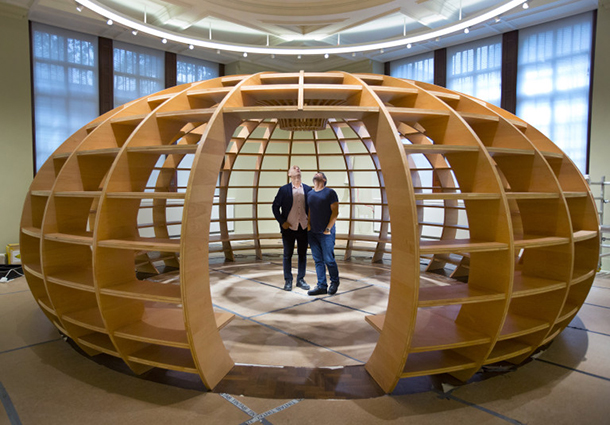 Salon I: ‘Where was Europe?’

This Salon focuses on views of the geographical, economic and social map of Europe (1600-1815) juxtaposed against contemporary discussions. Without restricting ourselves to limiting concepts such as centres and peripheries, the conversation explores the diversity and influences on European culture. The Salon discusses geographical and cultural areas including those that are less well represented in the V&A’s new galleries.

Salon I is introduced by the three following scholars:

Dr Helen Pfeifer, Lecturer in Early Ottoman History, Faculty of  History, University of Cambridge. Dr Pfeifer specialises in the history of the Ottoman Empire, with an interest in understanding its role within larger global contexts. Her current book project is entitled ‘Empire of Salons: Conquest and Community in 16th-Century Ottoman Lands’.

Dr William Kynan-Wilson, Postdoctoral Fellow, Aalborg University and Associate Scholar at the Skilliter Centre for Ottoman Studies, University of Cambridge. Dr Kynan-Wilson's research examines cultural exchange in the medieval and early modern periods, and in particular the relationship between travel literature and visual culture in the Mediterranean world. At present, he is examining Ottoman costume albums in the sixteenth and seventeenth centuries.

This Salon discusses Inter-European influences (1600-1815) including the still-vexed relationship between continental Europe and the British Isles. This topic is especially visible in national museums, such as the V&A, which divides its ‘British’ and ‘European’ collections into separate displays. This Salon aims to discuss direct influences of ‘continental Europe’ on British culture, and vice versa, and whether this has also contributed to contemporary presumptions of partition or closeness.

Salon II is introduced by the three following scholars:

Spike Sweeting, V&A/RCA History of Design. Dr Sweeting is a Tutor on the V&A/RCA History of Design Course. His work focuses on the construction of “markets” in early modern Britain, both as physical entities made up of buildings and goods and as conceptual categories used to explain social life. His other interests include the material and bureaucratic cultures of taxation, insurance, corruption and pensions. He is currently writing a book about the impact of Adam Smith and his associates on the late-Eighteenth Century Port of London.  He received his BA from UCL, MA from the V&A/RCA Programme and his PhD was awarded from the History Department of University of Warwick.

Dr Hannah Williams, Queen Mary University of London. Dr Williams is a Leverhulme Early Career Research Fellow at Queen Mary University of London at the School of History. She is an art historian specializing in the visual and material culture of eighteenth-century France. She has published and presented widely on subjects including portraiture and self-portraiture, religious art, the history of art institutions (e.g. the French Royal Academy, and the Louvre), social networks of artists in Paris, and artists’ material possessions. Her first book – Académie Royale: A History in Portraits (2015) – explored the official and unofficial relationships of artists in this pre-eminent institution, and she is currently writing her second book on Art and Religion in 18th-Century Paris.

Intercultural exchanges in the early modern period are most often seen from a Western European perspective, such as the influx of global influences which were crucial to Western European developments. In contrast this Salon seeks to explore how the period saw a global rise of interest in arts, materials and ideas from Western Europe to the world. The Salon aims to invite discussions on non-Eurocentric worldviews on European culture from the New World to the Far East.

Salon III is introduced by the three following scholars

Prof Daniela Bleichmar is Associate Professor of Art History and History at the University of Southern California. Educated at Harvard University and Princeton University, her work focuses on the histories of knowledge production, cultural contact and exchange, collecting and display, and books and prints in early modern Europe and the Spanish Americas. She is the author of Visible Empire: Botanical Expeditions and Visual Culture in the Hispanic Enlightenment, and a co-editor of three volumes on the histories of science, collecting, and material mobility in cross-cultural contexts. Her current projects include a book on Mexican codices and early modern transatlantic knowledge and the exhibition Images of Latin American Nature from Columbus to Darwin, at the Huntington Library, Art Collections, and Botanical Gardens.

Dr Anna Grasskamp received her Ph.D. from Leiden University with a dissertation on display practices in early modern China and Europe. Since 2013 she is post-doctoral fellow at Cluster of Excellence Asia and Europe in a Global Context at Heidelberg University, where she has taught three seminars on artistic exchange between East Asia and Europe. In 2015, Anna was visiting post-doctoral research fellow at Max Planck Institute for the History of Science in Berlin. Her publications include ‘EurAsian Layers: Netherlandish Surfaces and Early Modern Chinese Artefacts’, Rijksmuseum Bulletin 2015, ‘Asia in Your Window Frame: Museum Displays, Window Curators and Dutch-Asian Material Culture’, World Art 2015, and ‘Frames of Appropriation: Foreign Artifacts on Display in Early Modern Europe and China’, in Qing Encounters: Artistic Exchanges between China and the West, Getty, 2015.

Dr José Ramón Marcaida, Research Associate at the Centre for Research in the Arts, Social Sciences and Humanities (CRASSH), University of Cambridge. Dr Marcaida is a historian of science specialized in the intersections of ‘science and art’ in the early modern Spanish and Spanish-American contexts. His first book - Arte y ciencia en el Barroco español (2014), winner of the IV Alfonso Pérez Sánchez ‘Baroque Art’ International Award - explores the connections between natural history, collecting and visual culture in the Spanish Baroque. His current book project is a study of the scientific and artistic “cultures of ingenuity” in the Spanish Golden Age.

The final Salon in the series focuses on theatrical spectacles - events staged to display power, knowledge about the world, nature and its possibilities. Similarly, engineering, hydraulics and the control of nature were in early modern Europe expressed in elaborate fireworks, waterworks and architecture. The collecting of flora and fauna formed part of a broader attempt to acquire and categorize knowledge, which naturally changed over the time. This Salon discusses these and other aspects of early modern ephemerality, and will juxtapose the historical concept of knowledge with that of our own time.

Salon IV is introduced by the three following scholars

Dr Tina Asmussen is Post-Doctoral Fellow at the Max Planck Institute for the History of Science in Berlin. She is currently working on her second book project entitled “Subterranean Economies – Material and Epistemic Culture of the Mines in Early Modern Europe, 1470-1630”. This project investigates the perceptions and validations of ores within their different medial and material conditions, manufacturing processes and consumption contexts. Methodologically her research connects approaches from history of science and technology, material culture studies and cultural history of economy and art in order to analyse practices, processes and discourses upon metallic resources within learned, elite and craft cultures. In 2012, she received her Ph.D in History from the University of Lucerne, with a dissertation on Athanasius Kircher that investigates mechanisms of knowledge production and distribution as well as the collaboratively conducted modes of marketing the Kircherian science. She is also member of the editorial board of the Swiss history journal traverse – Zeitschrift für Geschichte/Révue d’histoire.

Dr Michael Bycroft is a Leverhulme Early Career Research Fellow at the Department of History, University of Warwick. He is interested in the role of crafts and collections in the sciences in early modern Europe. He is writing a book with the title “Which stones are precious? Craft, commerce and classification in early modern Europe”. He has worked at the Universities of Canterbury, Toronto, and Cambridge, and at the Max Planck Institute for the History of Science in Berlin. He has written (or is writing) papers on the following topics: physics in Auvergne, wonders in the Enlightenment, mineral waters in chemistry, science in the rococo period, and the symmetry principle in the history of science.

Dr Elaine Tierney is Lecturer in Early Modern History at the University of Manchester. She is an historian of early modern urban life, using a material-culture-centred approach to interrogate the role of the built environment in shaping social, cultural, political and economic histories. Her doctoral research, funded by an AHRC Collaborative Doctoral Award, was jointly affiliated with the University of Sussex and the V&A. This project investigated the material culture of early modern political experience, specifically the practical realisation of festivals and their troubled relationship to early modern ideals of the city. It was subsequently supported by a Postdoctoral Fellowship at the Paul Mellon Centre for Studies in British Art (2013/14) and forms the basis of her first monograph. New research moves beyond festival to reconfigure existing narratives that equate permanent buildings with ‘modernity’ and ‘progress’, by reincorporating temporally unstable structures into the early modern urban landscape. Part of the V&A’s Research Department since 2006, she is managing editor of the V&A Online Journal and has contributed to major museum projects, including the exhibition and catalogue, Baroque: Style in the Age of Magnificence (2009) and the television series Handmade in Britain (2012/13), a collaboration between the V&A and BBC4.

The Salon series is generously supported by the British Academy through the Rising Star Engagement Award.