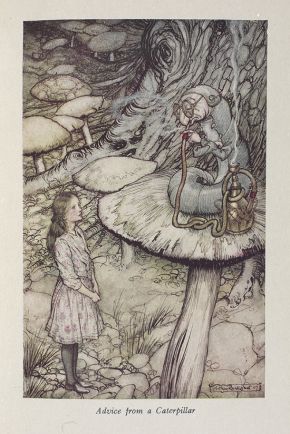 The story begins on 4 July 1862 when Charles Lutwidge Dodgson (1832-1898), an Oxford mathematician, set out on a boating expedition on the Thames with Lorina, Edith and Alice Liddell, the three young daughters of his friend, Henry Liddell. To pass the time he invented a story about a little girl called Alice who falls down a rabbit hole into a wondrous fantasy world. Intrigued by her friend’s spontaneous and bizarre story, ten-year old Alice Liddell requested a written version; two years later Dodgson presented her with an illustrated manuscript entitled, ‘Alice’s Adventures Under Ground’. Meanwhile, he reworked the story for publication, adding a new chapter, ‘The Mad Hatter’s Tea Party’. Alice’s Adventures in Wonderland appeared in 1865 under Dodgson’s pseudonym, Lewis Carroll, with illustrations by the Punch cartoonist, John Tenniel (1820-1914). A sequel, Through the Looking-Glass, and What Alice Found There, appeared in 1872.

Alice’s Adventures in Wonderland revolutionised children’s literature. Flouting the conventions of its day, it sought neither to educate nor to instruct, but only to delight. It has never been out of print and is translated into over 125 languages. Since copyright expired in 1907 Alice has inspired almost every major illustrator from Arthur Rackham to Ralph Steadman and artists and designers from Salvador Dali and Max Ernst to John Galliano. Parodies, sequels and adaptations abound from comics to computer games. Its language, like Shakespeare, permeates our vernacular and informs the way we see and make sense of our world. Together with her exuberant companions, the Mad Hatter, the Cheshire Cat and the White Rabbit, the Alice of Lewis Carroll’s Wonderland influences and inspires beyond the parameters of the text. As the comic book artist Bryan Talbot reveals, Alice lives in our ‘collective imagination’, pervading our literature, art, music, law, politics, philosophy and religion.