The term drawing is applied to works that vary greatly in technique. It has been understood in different ways at different times and is difficult to define. During the Renaissance the term 'disegno' implied drawing both as a technique to be distinguished from colouring and also as the creative idea made visible in the preliminary sketch.

'the formation of a line by drawing some tracing instrument from point to point of a surface; representation by lines; delineation as distinguished from painting...the arrangement of lines which determine form.'

Despite this insistence on the formation of line and the implied lack of colour, few would deny that a work formed by dots or shading or wholly in line but in a range of colours is a drawing.

The following drawings, made in different ways, have been selected to help define and also to stretch the boundaries of what drawing is. They vary in the medium used, which includes metal-point, graphite, charcoal, ink, and chalk. Some fulfill the strict dictionary definition of drawing, others do not.

There are many different reasons why people draw: 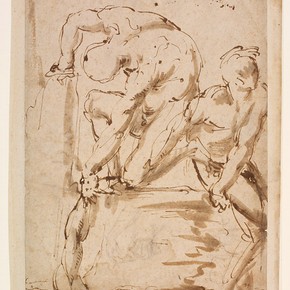 ‘In the first place you must study drawing for at least one year; then you must remain with a master at the workshop for the space of six years at least , that you may learn all the parts and members of the art...drawing without intermission on holidays and work-days’.

'The young man should first learn perspective, then the proportions of objects. Next, copy work after the hand of a good master, to gain the habit of drawing parts of the body well; and then to work from nature, to confirm the lessons learned.'

'Let whoever may have attained to so much as to have the power of drawing know that he holds a great treasure.'

‘It is not bright colours but good drawing that makes figures beautiful.'

'Man was not then considered a good goldsmith unless he could draw well.'

'Beautiful colours can be bought in the shops on the Riatlo, but good drawing can only be bought from the casket of the artist’s talent with patient study and nights with out sleep.'

'Drawing is the probity of art. To draw does not mean simply to reproduce contours; drawing does not consist merely of line: drawing is also expression, the inner form, the plane, the modeling. See what remains after that.'

'The art of drawing which is of more real importance to the human race than that of writing...should be taught to every child just as writing is.'

'it is only by drawing often, drawing everything, drawing incessantly, that one fine day you discover to your surprise that you have rendered something in its true character.'

'Drawing and colour are not separate at all; in so far as you paint, you draw. The more the colour harmonizes, the more exact the drawing becomes.'

'What is drawing? Not once in describing the shape of the mass did I shift my eyes from the model. Why? Because I wanted to be sure that nothing evaded my grasp of it… My objective is to test to what extent my hands already feel what my eyes see.'

'Italy up to near the end of the 16th century will always be the best school for all those who want to learn what drawing can explain...As it is by drawings that we make our records of form, its importance cannot be exaggerated. A school of painting in which drawing is not taught and drawing dissociated with painting is not worthy of the name of school. When a student begins to paint he will soon perceive the relation of drawing to paint.'

'Drawing instruction is a training towards perception, exact observation and exact presentation not of the outward appearances of an object, but of its constructive elements, its lawful forces-tensions, which can be discovered in given objects and of the logical structures of same-education toward clear observation and clear rendering of the contexts, whereby surface phenomena are an introductory step towards the three-dimensional.'

'Drawing is like making an expressive gesture with the advantage of permanence.'

'By drawing, man has extended his ability to see and comprehend what he sees.'

'In the final analysis, a drawing simply is no longer a drawing, no matter how self-sufficient its execution may be. It is a symbol, and the more profoundly the imaginary lines of projection meet higher dimensions, the better.'

'Drawing is a kind of hypnotism: one looks in such a way at the model, that he comes and takes a seat on the paper.'

'You can only learn to paint by drawing, for drawing is a way of reserving a place for colour in advance.'

'My doodles and sketches are not the work of an academic engineer. They represent many years of design study in attempts to produce the best value for money in the field of small car design.'

'Drawing makes invention more accessible for me. Faster. Immediate. I start a drawing and I start to invent.  I am always destroying the drawing’s status quo. I guess you could say I practice my own form of larceny. I sabotage reality, otherwise its like kissing without using your tongue. I can’t even cook a hamburger without messing with it… Before, often I lay down everything in a realistic way, but now, I have less patience for realism, my heart is too full. I need to release more emotion. I want more emotion and that gets in the way of realism. I want to cut the realism. Now, I’m letting off a lot of firecrackers, and I’m putting down a lot of ideas as though I was building with ideas. Things are coming up. Things are coming up and I have no way to speak about what the things are, but things are coming up that wouldn’t ordinarily grow next to each other. The depiction of physical energy on the paper and the disturbing of the paper’s surface are other ways to bring the drawing to life.'

'At the time of co-ordinating (in collaboration with Allen Jones) the 2004 Royal Academy Exhibition which had a special focus on drawing: ‘drawing has been neglected for the last 30 years in art education…That was based on the idea that photography would suffice as a view of the world…people are now aware that photography can be digitally manipulated and may no longer reflect reality…It is time for us to look at how images are made, to place greater value on drawings and draughtsmanship…practically everything comes to life on a drawing board.'

'I sketch all the time, I am surrounded by endless amounts of A3 and A4 size pads. I am constantly trying to resolve problems and details. I have a necessity to know what a detail looks like – how the materials come together, how it works in three-dimensions. If I draw it for myself, I understand it. If I try to imagine it, it is too whimsical. Sketching is a tool – an extension of one’s brain.'

‘Until we can insert a USB into our ear and download our thoughts, drawing remains the best way of getting visual information on to the page. I draw as a collagist, juxtaposing images and styles of mark-making from many sources. The world I draw is the interior landscape of my personal obsessions and of cultures I have absorbed and adapted, from Latvian folk art to Japanese screens. I lasso thoughts with a pen. I draw a stave church or someone from Hello! Magazine not because I want to replicate how they look, but because of the meaning they bring to the work.'

‘I was literally 3 years old when I started drawing. I did it all my life, through primary school, secondary school, all my life. I always, always wanted to be a designer. I read books on fashion from the age of twelve. I followed designer’s careers. I knew Giorgio Armani was a window-dresser, Emanuel Ungaro was a tailor.’