The V&A Illustration Awards were established in 1972 and have since become the UK’s most prestigious annual illustration competition. Free to enter, the Awards celebrate excellence in student illustration and three categories of contemporary practice: book cover design, book illustration and illustrated journalism.

The Awards are generously supported by the Enid Linder Foundation and the Moira Gemmill Memorial fund. 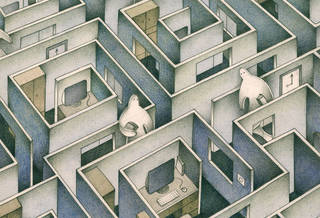 Congratulations to the winners of the 2020 Awards.

From imaginary worlds and fairy-tales to the difficult reality of life in a refugee camp, the winners of this year's awards demonstrate the versatility and breadth of contemporary illustration.

The winners are each awarded a £3,000 prize and trophy. The Student Runner-Up receives £2,000 and trophy. Ann Kiernan has been awarded the Moira Gemmill Illustrator of the Year prize of an additional £5,000. All winners and Highly Commended students receive a certificate.

Thank you to all participating illustrators.

Due to the Coronavirus pandemic, it has not been possible to display the Award-winning illustrations at the museum.

History of the Awards

The V&A Illustration Awards blog brings you the latest updates throughout the year including the shortlist and winner announcements. You can also hear from our previous winners and receive words of advice from former judges.

Background image: Student Illustrator of the Year 2019 shortlist – Harry Woodgate for Invisible Cities (University of Hertfordshire)
We use cookies to enhance your experience on V&A websites. Read our cookie policy to find out more.