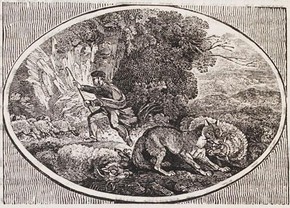 Thomas Bewick, 'The Shepherd's Boy and the Wolf' (The Boy Who Cried 'Wolf'), wood-engraved illustration, from 'Fables of Aesop and others', 1818. Printed by E. Walker for Thomas Bewick, Newcastle. National Art Library Pressmark: G.28.Y.1b

The National Art Library has a large collection of illustrated Aesop's Fables dating from the 15th century to the present day. The following extract is taken from The Fables of Aesop by Joseph Jacobs (London: Macmillan & Co., 1894).

'There was once a young Shepherd Boy who tended his sheep at the foot of a mountain near a dark forest. It was rather lonely for him all day, so he thought upon a plan by which he could get a little company and some excitement. He rushed down towards the village calling out "Wolf, Wolf," and the villagers came out to meet him, and some of them stopped with him for a considerable time.

This pleased the boy so much that a few days afterwards he tried the same trick, and again the villagers came to his help. But shortly after this a Wolf actually did come out from the forest, and began to worry the sheep, and the boy of course cried out "Wolf, Wolf," still louder than before. But this time the villagers, who had been fooled twice before, thought the boy was again deceiving them, and nobody stirred to come to his help. So the Wolf made a good meal off the boy's flock, and when the boy complained, the wise man of the village said:
"A liar will not be believed, even when he speaks the truth."'