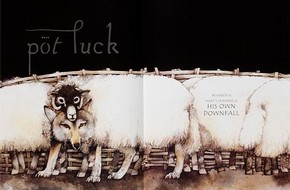 Helen Ward 'Pot Luck: in which a wolf's cunning is his own downfall' 2004 From ink, watercolour and gouache illustration From Unwitting Wisdom: an Anthology of Aesop's animal fables Published by Templar, London National Art Library Pressmark: 60.MM.57

'A Wolf found great difficulty in getting at the sheep owing to the vigilance of the shepherd and his dogs. But one day it found the skin of a sheep that had been flayed and thrown aside, so it put it on over its own pelt and strolled down among the sheep.

The Lamb that belonged to the sheep, whose skin the Wolf was wearing, began to follow the Wolf in the Sheep's clothing; so, leading the Lamb a little apart, he soon made a meal off her, and for some time he succeeded in deceiving the sheep, and enjoying hearty meals. Appearances are deceptive.' 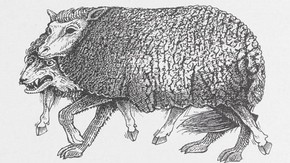 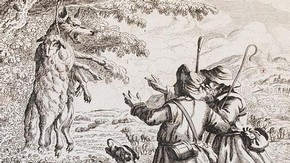