The archives of Sir Hugh Casson (1910–1999) and Margaret Macdonald Casson (1913–1999) are important additions to the Museum’s collection of papers of twentieth-century British designers. The archives, which were generously donated by the Cassons' daughters, contain a wealth of material relating to their careers as architects and designers.

Sir Hugh Casson achieved popular recognition, and a knighthood, for his role as Director of Architecture for the South Bank exhibition at the 1951 Festival of Britain. He was to remain in the public eye for the rest of his life, working diversely and tirelessly as an architect, designer, journalist, illustrator, committee man and watercolour artist. As well as being a senior partner in the Casson Conder Partnership, the architectural practice that he created with Neville Conder, he also headed the interior design department at the Royal College of Art. In 1976 he was elected President of the Royal Academy of Arts and is widely acknowledged as being one of the institution’s most successful presidents.

Sir Hugh Casson’s archive contains material relating to all aspects of his career and includes drawings, manuscripts, correspondence, books, press cuttings and photographs. Highlights include his designs for camouflage during the Second World War, original sketch plans for the layout of the Festival of Britain on the South Bank, and set designs for theatre and opera. The theatre drawings include several opera sets commissioned for Glyndebourne Festival Opera, including ‘Alceste’ (1953) and ‘La Fidelta Premiata’ (1979). He also designed the set for the first production of ‘The World of Paul Slickey’ (Palace Theatre, 1959), John Osborne’s satirical musical about Fleet Street and a sleazy gossip columnist. The drawings range from preliminary sketches and rough storyboards, to more detailed designs for each scene, structural details, and designs for painted backdrops.

Casson’s journalistic career is also well represented in the archive. In 1937 he became the architectural correspondent for Night and Day, a short lived magazine that was edited by Graham Greene, and appears to have been intended to be London’s answer to The New Yorker. His articles, which were often illustrated with his own lively sketches, were also regularly published in the Architect’s Journal, the Architectural Review, and the national Sunday papers. The archive contains notes and sketches, and typed drafts of articles as well as copies of published articles.

Margaret Macdonald Casson (1913–1999) worked as an architect and designer and taught design at the Royal College of Art. Her commissions included the interior design of the headquarters of the Glass Manufacturers’ Association in Portland Place in 1955, in collaboration with other designers. She also organised a number of design exhibitions including Royal College of Art exhibitions in the USA (1969) and Japan (1972), and a series of craft exhibitions held at the V&A during the Silver Jubilee year (1977). After her retirement from the Royal College of Art she returned to an earlier love of photography and created photographic prints and etchings, many of which have been exhibited in solo and group exhibitions.

Margaret Macdonald Casson’s archive contains drawings, correspondence, photographs, negatives and objects. Highlights include a full set of china designed for the P&O liner ‘Canberra’, and prints produced by the photo etching process. She also experimented with camera-less photography, and by placing objects directly on to photo sensitive paper created some unusual and imaginative prints.

The cataloguing and conservation of the archives has been generously funded by the Rootstein Hopkins Foundation. They are available for public consultation in the Blythe House Reading Room. 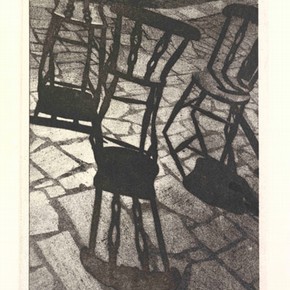 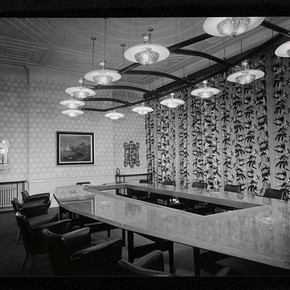