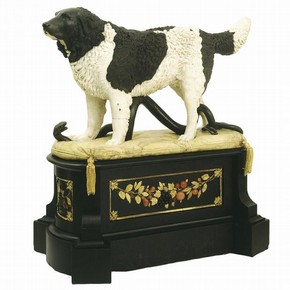 19th-century opinions of the sculpture of the dog Bashaw.

NARRATOR: Bashaw, was the favourite dog of the Earl of Dudley, the Earl died before the sculpture you see here was finished. Matthew Cotes Wyatt, the sculptor, wrote to the executors of Dudley's estate explaining how involved the Earl had been with the commission … ..

WYATT: The … model was entirely approved of by his Lordship, who was pleased to compliment me on its fidelity to nature exclaiming 'there you stand Bash, in the flesh'.

NARRATOR: Wyatt never did get paid by the estate but instead exhibited Bashaw in 1834 to great acclaim by public and press.

LONDON LITERARY GAZETTE: The most elaborate representation of a quadruped ever produced by ancient or modern art… . its characteristic effect is strikingly natural, as… even the minutest mark is closely copied… . the eyes composed of gems, are imitated with that exactness that gives the mimic animal the intelligence of actual life.

NARRATOR: Not everyone agreed. The art critic John Ruskin saw the sculpture in 1871. He thought it… .

BIRD: Most noble creature of a noble race! Pugnacious Prince of Newfoundland breed! There dwells a surly grandeur in your face, of which 'tis well to take especial heed. There starts a stern and care-for-nothing grace. From your keen eye like lightning in its speed and he who looks upon you scarce can fail, to fancy that he sees you wag your tail.