Buddhist sculpture at the V&A 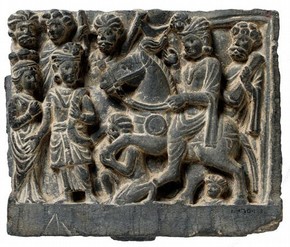 Drawing on the finest depictions of the Buddha from the V&A's renowned Asian collections, The Robert H. N. Ho Family Foundation Galleries of Buddhist Art explores the major Buddhist sculptural traditions of Asia.

Forty-seven Buddhist master works are shown in a spacious, naturally-lit environment, avoiding the use of cases wherever possible. The sculptures are grouped primarily by geographical region, showing the individual responses of local Asian traditions to Indian Buddhist teachings. Each room explores the development of Buddhist doctrines as they are reflected in sculptural form. Sculptures dating from between the 2nd and 19th centuries in a wide variety of media including stone, gilded metal and lacquered wood are displayed.

Features include early Indian and Sri Lankan traditions and the life events of the Buddha; the last phase of Indian Buddhism and the transference of the doctrines to the Himalayan regions of Tibet and Nepal; and a look at the Mahayana and Vajrayana teachings which were so important to Tibet and elsewhere in Asia.

Other displays include works from South East Asia, primarily from Thailand, Burma and Java and an exploration of the Theravada teachings which were to be of central importance to the region. Works from China and Japan are displayed; the religious themes including the varied Mahayana doctrines which formed the most important schools.

The project will provide a beautifully designed courtyard, new entrance into the V&A and exhibition gallery, as well as a café for our visitors. It forms part of FuturePlan, our ambitious and long-term programme that is transforming the V&A by revitalising visitor facilities and redisplaying the collections.

The gallery will reopen in 2017 on completion of the Exhibition Road Building Project.