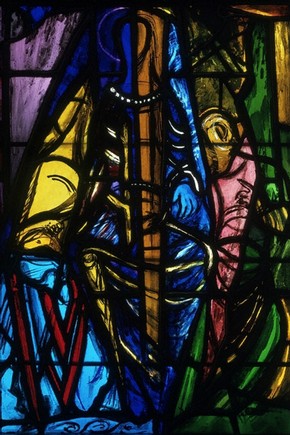 John Piper (1903-1992) and Patrick Reyntiens (born 1925) revolutionised architectural glass in Britain, opening up new possibilities for the artists who followed. They were introduced by the poet John Betjeman and worked in partnership from 1950. Piper had studied art at the Royal College of Art in London and was now a renowned artist, designer and author. Reyntiens had studied fine art at Edinburgh College of Art and had worked with the eminent stained glass artist J.E. Nuttgens.

John Piper often wrote about his work in stained glass. Instead of making a stained glass design, he thought like a painter, creating, in one go, a light-filled architectural unit. In Reyntiens he found his 'creative translator', a brilliant artistic collaborator who could interpret his designs in the special medium of glass.

Patrick Reyntiens is a great exponent of modern art in ecclesiastical spaces. He has written about the development of artistic displays in 20th-century religious institutions in England and mainland Europe. He has encouraged people to break away from conservative treatments of windows in churches.

Although the subject of this window is traditional, it is not conceived as a simple figurative display. The image of the seated Christ forms the centre of the architectural void. The glass then expands out from this core as light radiates through glass from its entry point, and bathes the architectural interior with its light and colour.