At the beginning of the 19th century, stained glass was effectively a dead art, having fallen out of fashion over two centuries before. But its fortunes were soon to change. Many Victorian designers were uneasy with the 'vulgar effects' of mass production, and began to look backwards into history for different ways of doing things. Medieval stained glass was a good fit for this nostalgic project. Its methods were relearned and championed by the Gothic Revivalists (admirers of medieval Gothic architecture) and others, including leading Arts and Crafts designer William Morris. In the 20th century this new take on tradition developed into more abstract work that was far more obviously modern – and a lot less like the windows that had first inspired the Victorians.

In Victorian England, society was dominated by industrialisation. The country underwent two seismic changes during this period: the rapid replacement of craft manufacture with mass production, and the depopulation of the countryside, as people flocked to the cities to take up work in the new factories. Many reformers, writers, artists and designers began to publicly question the impact of this form of 'progress', and to search for alternatives. This interest in developing a different kind of social and aesthetic template had its roots in the 18th century. In that period, new styles of writing and architecture had begun to focus on the idealisation of nature and an interest in returning to the simpler and more 'honest' values of the past.

One of these new styles became known as Gothic Revival. Applied mainly in the fields of architecture, interior design and painting, it was largely based on forms and patterns used in the late medieval period (about 1250 – 1500). Artists combined the serious study of historical examples with a more fanciful vision of medieval chivalry and romance. One of the core expressions of Gothic Revival was a widespread interest in the religious art of the medieval church, including stained glass, which had fallen out of favour centuries before. The effects of the Reformation (the 16th-century reform of the Roman Catholic church which led to the establishment of the Protestant churches) had gradually steered the arts away from a focus on religious subjects. Over time decorated windows had become increasingly secular (non-religious) and, as a result of technical developments, more like 'paintings on glass' than traditional lead-sectioned stained glass.

The popularity of Gothic Revival in the 19th century led to the building of a huge number of new churches, most filled with large and colourful 'story-telling' windows. Artists and scientists worked together to revive the techniques of medieval glass production and decoration, including the manufacture of pot-metal glass. Pot-metal glass, with colour running right through it, is achieved by mixing metal oxides into molten glass in a pot, and hadn't been used much since the late 16th century. It took many attempts for Victorian glass technicians to understand its properties and recreate it, but once pot-metal was finally put into production in the early 19th century, its rich colours meant it was used widely by artists working in the Gothic Revival style.

Thomas Willement, active in the first half of the 19th century, was one of the first artists to embrace the new developments in the design and production of stained glass. As Artist in Stained Glass to Queen Victoria, Willement made armorial (heraldic) glass for St George's Chapel, Windsor, and pioneered a return to the true principles of medieval craftsmanship. Informed by his early training as a glazier and plumber (a job that relied on a person's skills in working with lead), he used pot-metal to introduce colour into his work and lead to emphasise the main outlines of the design, and to join the pieces of glass together.

Whereas in the 18th century, a common technique had been to paint on to clear glass with enamel paints, designers such as Willemont and others instigated a move away from this method. Through studying surviving medieval windows, they came to appreciate the simple beauty of traditional stained-glass composition and the way it builds up like a mosaic. One of the leading Gothic Revival glass designers, active from the mid-19th century onwards, was Nathaniel Westlake. His famous piece designed specifically for an exhibition of stained glass held at the South Kensington Museum (later the V&A) in 1864, The Vision of Beatrice, offered an influential blend of traditional method with a modern, noticeably more fluid composition. A designer for, and then partner at the glass firm Lavers, Barraud and Westlake, he created many stained glass schemes for churches, as well as a celebrated set of windows for Mary Datchelor Girls' School in Camberwell, south London (1896).

'New glass' and the Arts and Crafts movement

The cultural promotion of medieval stained glass in Victorian high society no doubt had a huge influence on the work of the celebrated designer William Morris. A man who began his career looking for more 'honest' forms of art, Morris was drawn to the intense colours and bold composition of historical church windows. In 1861, he established the firm of Morris, Marshall, Faulkner & Co. – as well as supplying windows as part of interior schemes for a number of England's new ecclesiastical buildings, the firm also took private commissions for decorated windows, and was instrumental in the reintroduction of stained glass into domestic design.

Rather than designing for stained glass himself, Morris turned to the talents of his friends who were painters (all of whom were either members of or influenced by the Pre-Raphaelite Brotherhood): Dante Gabriel Rossetti, Ford Madox Brown, Philip Webb and Edward Burne-Jones. Morris, Marshall, Faulkner & Co.'s first domestic glass commission was for a series of windows for Harden Hall in Bingley, West Yorkshire. Designed by Rossetti in around 1862, these windows tell the story of St George and the Dragon, and were soon followed by others that built into an extensive repertoire of designs. Morris brought to this enterprise a detailed understanding of process, and vigilance against pastiche. Other Arts and Crafts glass artists, such as Selwyn Image and Carl Almquist, shared Morris' dislike of referencing medieval windows in an overly literal way, and rejected the 'heavy approach' of the more traditional Gothic Revivalists.

The impetus in 'new glass' created by the Arts and Crafts movement continued on into the 20th century. Christopher Whall was an influential figure at the end of the Victorian period. He was one of the first designers to make use of the new 'slab' glass – a material designed to emulate the luminosity and the irregular thickness and colouring of early medieval glass, invented by architect E.S. Prior in 1889. Whall was also the first teacher of stained glass at London's Central School of Arts and Crafts. Whall's daughter, Veronica, also became a glass designer and, in 1922, a co-director of Whall & Whall, a firm that went on to produce work for ecclesiastical buildings including the cathedrals of Carlisle and Leicester.

Other important names in the early 20th century include Mabel Esplin and Harry Clarke. Esplin, an active member of the Women's Suffrage movement, is mainly remembered for her largest commission: a series of windows for All Saint's Cathedral in the Sudanese capital, Khartoum, in 1912. Clarke was Ireland's most celebrated stained glass artist, with a signature style based on subtly elongated figures that nodded towards Impressionism.

After the Second World War, the gradual acceleration away from realism put a significant distance between new designers and the work of their Arts and Crafts predecessors. Striking examples of this newly abstract mid-century aesthetic are offered by the work of designer John Piper and his 'creative translator', glass-maker Patrick Reyntiens. Together Piper and Reyntiens revolutionised architectural glass in Britain, opening up new possibilities for the artists who followed. Their projects include windows for the Baptistry at Coventry Cathedral (1961) and Liverpool Roman Catholic Cathedral (1965 – 67). 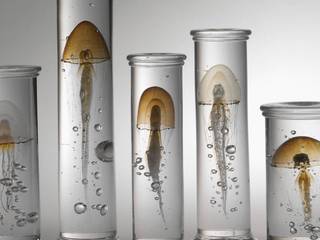 Visit the shop
Background image: Vision of Beatrice (detail), panel of coloured glass with painted details, Nathaniel Westlake, about 1863, England. Museum no. 780-1864. © Victoria and Albert Museum, London
We use cookies to enhance your experience on V&A websites. Read our cookie policy to find out more.