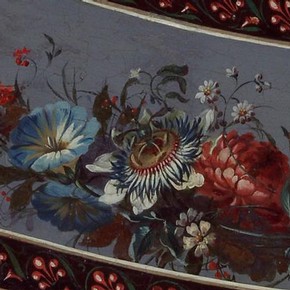 George Brookshaw was born in Birmingham in 1751 and died in London in 1823.

George Brookshaw and his brother trained as artisans. Apprenticed in his youth to Samuel Troughton, a Birmingham painter and ‘japanner’, George ran away in 1767. Nothing else is known of these formative years.

In 1778 he married the daughter of a wealthy Birmingham gunsmith, and around the same time he established a London workshop. He mainly made painted and stove-japanned furniture for the top ranks of society.

In the mid 1790s Brookshaw’s personal circumstances changed once again, and he left the furniture trade for good. Ever resourceful, he used his draughtsman’s skills to become a professional botanical illustrator.

Innovative techniques such as ‘stoved-japanning’ were in high demand in 18th-century Britain, with its interest in science and its desire to reduce luxury imports. Most manufacturing workshops were based in Birmingham, but Brookshaw decided to set up in London, within reach of wealthy clients. 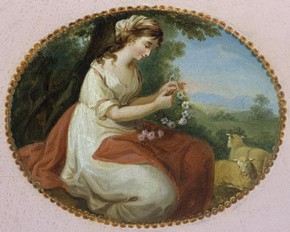 He attracted many distinguished patrons. Described on a 1783 bill to the Prince of Wales as ‘Peintre-ebeniste par Extraordinaire’, Brookshaw had the sophistication and superior skills that were associated with French design. His reputation was such that he shared prestigious commissions with the likes of the famous architect and designer Robert Adam.

Brookshaw was a highly skilled painter, excelling in botanical decoration as well as figurative and landscape designs. By 1788 he had developed a particular speciality, advertising in the London press his ‘New Fashioned Elegant Chimney Pieces with Copper Panels, elegantly painted’. The chimney-piece for Piercefield Park is a good surviving example, supplied as part of a large commission including furniture.

Being commercially minded, Brookshaw recognised that his reputation rested on innovative techniques. He described his work as a ‘new species of painting’ but was careful not to reveal his methods. Working on a commission in Hanover Square, he painted behind locked doors. 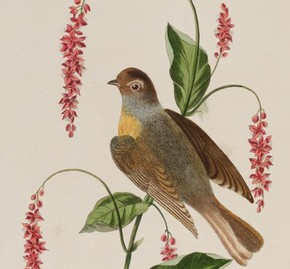 In his Great Marlborough Street workshop Brookshaw sold ‘candilabriums’ and mirror frames, as well as executing commissions for furniture. Payment for commissions could be unpredictable, so the sale of stock products helped spread financial risk.

Around 1795 scandal or a financial dispute seems to have ended Brookshaw’s furniture career, but he adapted his artistic skills to botanical illustration. Under the alias John or G. Brown, he wrote and illustrated painting manuals and taught flower painting to ladies.

Pomona Britannica was published from 1804, under his own name. An ambitious book of hand-coloured aquatints illustrating 256 species of British fruit, it was dedicated to the Prince Regent.

Max Donnelly, Curator of 19th-Century Furniture at the V&A, discusses a table from the workshop of George Brookshaw

My name’s Max Donnelly, I’m Curator of 19th-century Furniture at the V&A. I’m looking at a table designed and made by the workshop of George Brookshaw in the 1780s.

It’s decorated with oval medallions with scenes depicting classical maidens. It’s bordered with a marvellous wreath of various flowers, more flowers than certainly I can name. I can get some of the obvious ones like the roses, and the passionflower here towards the middle, and the honeysuckle as well, convolvulus too. And there are even little moss roses on the left. It’s very interesting because Brookshaw was a botanical illustrator and very talented artist as a flower painter himself, and that was really something that after he decorated furniture in the early 1800s, something that he specialised in. And I like the idea that the careless abandon of these flowers, actually, you can almost tell something of his character from that.

In fact he was a bit of a tearaway. He absconded from the workshop in which he was an apprentice when he was about 16. In fact there was a reward put up to try and get him back. And he then made an advantageous marriage in his late twenties, which effectively set him up in business. But he more or less abandoned his wife and was estranged from her. He ran out of capital in the 1790s, and this may be because his father-in-law wasn’t best pleased with how he had been treating his wife. And there was a transition between him making furniture, and painting and publishing these manuals for painting. And he seems to have gone under false names for up to ten years. So he deliberately covers his tracks, probably because he owes people money.

We don’t know anything about the specific commission that this, and its other table of this pair, who they were made for, however we can imagine them in a fashionable drawing room, bang up to the minute. No doubt the lady of the house would have had a lot, perhaps, to do with the commission and overseeing it.

The positioning of the tables was likely in front of a large pier glass set between windows. In which case you had this marvellous, full-blown effect of the semi-circular top of course being this great disc of glowing colours and pattern. So the setting of the piece would have been quite magnificent, and would have exaggerated its beauty even more.

Laurence Llewelyn-Bowen, interior designer, discusses a table from the workshop of George Brookshaw

I’m Laurence Llewelyn-Bowen, I’m an interior designer, and I’m looking at the most extraordinary confection of a table, which, to me, looks more like a frock than a table really, it’s so exquisitely embroidered. We’ve got no idea what this table is made of - it could be embroidered silk, it could be icing, this could be a cake for goodness sake, because it’s all about the surface decoration. It’s something that we do very, very rarely in Britain, but when we do, we do it extremely well.

It’s about fashion, as far as I’m concerned, it’s not about furniture at all. You think of furniture - if it’s going to be painted rather than wooden – as being in sort of soft shades of green. And maybe you get something a bit more exotic and a bit more Eastern-inspired with richer, darker colours of reds and blacks. But grey, pink, this browny-maroon, the highlights of coral. You can actually imagine all of that fitting perfectly on a frock of the day, even this sense of an embroidered band round the bottom of a skirt. There is something so absolutely overwhelmingly feminine about the way this piece of furniture looks. And then even the central roundel, there’s the sort of pretty standard classical depiction of some kind of canopy everyone was ripping off from Pompeii. But here, he’s made it look like a clutch bag, or a piece of bonnet almost, or a parasol. It’s become a weapon in the charmery of feminine seduction.

To me, there would be two approaches with a table like this today. I mean should someone very, very sweetly buy it for me for Christmas. Either you put it in an entirely modern room, with nothing else going on in it and turn it into a complete icon, or, I’m afraid, you’d do exactly what I’d do, which is to throw it in amongst the clutter of the bedroom that me and Mrs LLB inhabit, cover it with used boxes of chocolates, empty champagne bottles, little bits of ribbon, and maybe an unfortunate accident from one of the kittens - which is probably what it looked like when it was originally installed.

This display is devoted to an elegant semi-circular side table made in about 1785 by George Brookshaw – a specialist in painted furniture. With a radius of half a metre, it curves towards us on four carved and gilded tapering legs. The table top and its vertical front – the frieze – are decorated with colourful bands of flowers, some stylised and some naturalistic. These have been painted onto copper plaques fixed to the wood body. Much of the smooth surface is now crazed like broken eggshell by tiny hairline cracks.

On the table top, the decorative bands form concentric semi-circles. Working outwards from the centre, the first is a radiating green motif like an open fan with a pink scalloped edge. It’s bounded by bead-like dots and then two bands of stylised honeysuckle in coral pinks, green and dark maroon.

Next comes a wide expanse of delicate pastel pink. Evenly spaced within it are three painted oval medallions – two larger ones, on their side, facing a smaller upright oval in the centre depicting a white urn against pale blue. Each larger oval portrays a young woman – facing the central urn - wearing a white short-sleeved robe and red cloak in a landscape of soft blues and pinks. They’re classical nymphs. The one on the left kneels and reaches out to two swans. The nymph on the right sits with two sheep behind her, her shepherdess’s crook in her left arm. She’s carving her lover’s name on a tree-trunk.

Towards the outer edge of the table top, more bands of honeysuckle border a wider area of pale blue-grey where a realistic profusion of flowers and leaves hang in six fat swags from gold ribbons. In fact, Brookshaw later abandoned furniture-making to devote himself to botanical illustration.

In contrast to the table top the frieze is more subdued: two bands of white decoration on pale grey – like piped icing on a wedding cake – divided by a gilded lotus-leaf moulding. Along the very bottom are gilded laurel leaves.