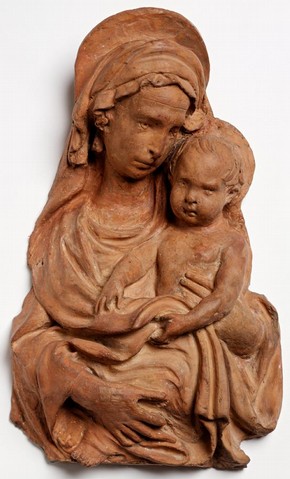 Through their masterful control of material and a superb sense of artistry, Italian sculptors have explored the versatility of terracotta to create some of the most alluring and expressive sculptures in the history of art.

A history of terracotta

'Modelling in clay is to the sculptor what drawing on paper is to the painter… In the soft clay the genius of the artist is seen in its utmost purity and truth…'
Johann Joachi, Winckelmann, History of Art, 1776

Clay is an inexpensive and abundant material that has been used since ancient times to make bricks, tiles, pottery, and ritual objects. When fired, clay becomes terracotta, or 'baked earth'.

In the hands of Donatello and his contemporaries in early 15th-century Italy, terracotta became a fundamental medium of artistic expression and creativity, and remained so until the age of Antonio Canova in the late 18th and early 19th centuries. Skill in handling clay became a requirement at art academies across Europe; the development of new technologies fed the demand for clay sculpture, and clay models took on a central role in portraiture and relief sculpture. Clay was essential to the creative process of sculpture during this period.

The potential of using clay to reproduce devotional images was first recognised by two of the leading sculptors in early 15th-century Florence. Lorenzo Ghiberti ran a large workshop while making bronze doors for the Florence Baptistery. He trained most of the leading sculptors, and the young Donatello, who became the most influential sculptor of the period, also spent time there. The use of clay was central to the production of bronzes and Ghiberti recognised its versatility. Clay could be moulded to replicate images which were then fired, painted and gilded, providing a cheap alternative to more expensive materials, such as marble and bronze.

The Virgin and Child was a popular theme, which found classic expression in the works of Donatello and Luca della Robbia. Donatello's interest was in combining different materials, while Luca adapted pottery glazes to produce more durable and vibrant surfaces. This innovative technique was described by the famous painter and biographer, Giorgio Vasari, as 'a new, useful and most beautiful art'. 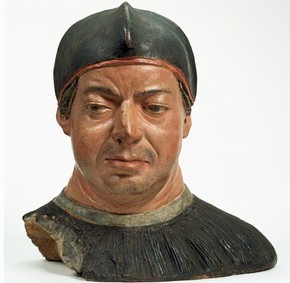 Portraiture is often seen as the quintessential Renaissance art form, and clay was used increasingly during the 15th century to produce life-like busts. It was an ideal medium to make models for portraits in other materials. Most finished clay portraits would have been painted to appear more realistic, like the extraordinarily vivid likeness of Cardinal Giovanni de' Medici, the future Pope Leo X, based on a mask taken from life. In other cases, like the rare bust of a Young Man in Armour by Antonio del Pollaiuolo, the clay image was painted to imitate the far more costly material of bronze. Its torso is fashioned with coils of clay, like an earthen jar, demonstrating how pottery techniques were adapted for sculpture. The bust of Tommaso Rangone by Alessandro Vittoria was originally created as the model for a portrait in bronze. It was later gilded to produce a more decorative object for display.

Verrocchio and the terracotta model 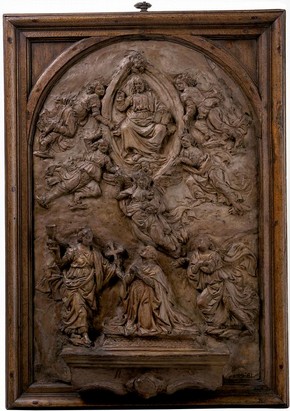 By the late 15th century, terracotta models had become an integral part of the sculptor's production. In Florence, Andrea del Verrocchio ran a large workshop which produced both sculpture and paintings. He made a variety of studies for his works, and raised terracotta to an important art form through projects like the monument to Niccolò Forteguerri in Pistoia. Five artists were invited to submit models in competition for this prestigious commission, and Verrocchio's terracotta model was declared the winner. It is one of the earliest surviving examples of a sculptor's model, representing the start of a long tradition which extended well into the 18th century. The Forteguerri relief is a detailed representation of the finished design, but it contains a freshness and lively handling more commonly associated with a sketch. Verrocchio also used draped models to make drawing studies for paintings, which assisted in conveying volume in his painted figures.

Terracotta was often used as a substitute for marble or bronze, especially outside central Italy where there were no available marble quarries. It was a flexible and versatile medium, which could rival painting in its exploitation of colour and movement to create credible figures in the round. Most of these works have been destroyed or remain in their original chapels across northern Italy. The Archangel Gabriel, is a rare example of what had been a common form. Agostino di Duccio, its creator, made a work of exceptional beauty, which would originally have been enhanced by pastel colouring. Traces of the original paint can still be seen. Andrea Riccio's Virgin and Child is actually a fragment of a full-scale seated statue, which had been cut into sections for firing and then reassembled. Riccio is now best known for his small bronzes, but in his own day he was equally celebrated for his sculpture in clay.

Three reliefs, showing scenes from the life and legends of St Francis, were made by the Florentine sculptor, Benedetto da Maiano, in 1481. Together with another panel in Berlin, they represent the only surviving relief cycle in terracotta from the 15th century. They were made as full-scale designs for the reliefs on a marble pulpit commissioned to commemorate the wealthy Florentine banker, Pietro Mellini, who had sat for a portrait bust by Benedetto in 1474. The panels were made within wooden boxes lined with paper. A spatula (a flat modelling tool) was used to create the background and architectural setting for each scene. The high-relief figures were modelled separately and applied to the surface before the reliefs were fired in a kiln. The loss and dark discolouration seen on the Funeral of St Francis occurred during the firing. The reliefs have been mounted to imitate the finished work, and a plaster cast of the pulpit can be seen in the Italian Cast Court (Room 46B) at the V&A.

The cult of the model

The sketch model owed its popularity to the preliminary studies by artists such as Michelangelo (1475-1564) and Giambologna, sculptor to the Grand-Dukes of Tuscany. Sculptor's models were seen to reveal the artist's initial concept and were prized by both fellow artists and connoisseurs. Giambologna's models capture the spontaneity of his modelling technique. In the River God it is possible to see the artist's fingerprints as he gouges and wheedles the clay into shape.

The great master of the clay sketch was Gian Lorenzo Bernini, an outstanding genius who dominated artistic life in 17th-century Rome. Bernini used his models to work out a particular aspect of the design, often leaving the rest of the work unfinished. 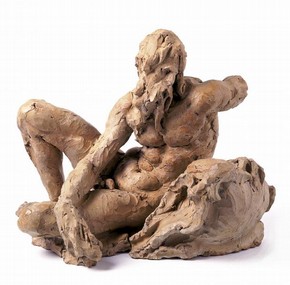 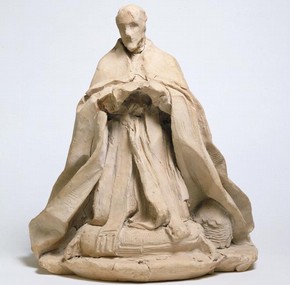 Relief sculpture: From Renaissance to Baroque

Bernini famously said that he wanted to make marble as malleable as wax. But it was his great rival, Alessandro Algardi, who first applied this principle to relief sculpture. Algardi made relief altarpieces fashionable. He exploited the painterly quality of clay and translated it into more permanent marble monuments. 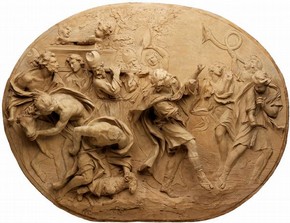 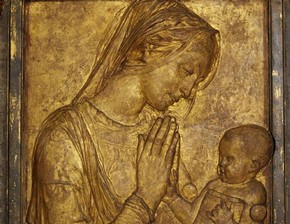 Terracotta models of the Baroque: Bernini and Algardi 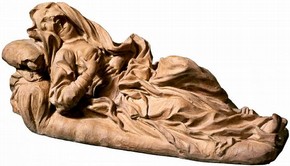 The two great artists, Bernini and Algardi, were largely responsible for the significance of the clay model in the 17th century. Bernini made thousands of clay models, and around forty have survived. These remarkable works shed light on the evolution of his ideas. Bernini usually began with a quick pen sketch. He then made several clay models to study the impact of his design in three dimensions. There were a large number of models made in connection with the over-life-size marble Angels for the impressive Roman bridge, the Ponte Sant'Angelo. These were mainly made by Bernini with the collaboration of his large workshop. Most are quick sketches or bozzetti in clay, that demonstrate his endless exploration of subtle variations on a theme - almost like freeze frames in the study of movement. In contrast, Algardi's models tend to be more finished and reflect a wider range of commissions. 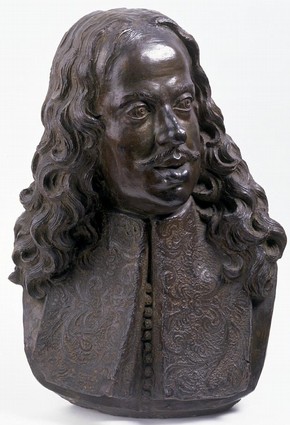 The Renaissance concept of the ‘speaking likeness’ was raised to new heights by the Baroque portrait bust. Algardi’s sensitive terracotta bust of Pope Innocent X served as the basis for the pope’s official portraits and was subsequently painted white to imitate marble. A similar recycling of a terracotta model can be seen in Giovan Battista Foggini’s bust of Cosimo III de’ Medici. Two layers of metal leaf and paint have been applied to the surface to simulate the more precious material of bronze.

Models and finished works in the 18th century

During the 18th century, terracotta was valued as much for its decorative qualities as for its practical uses. Famous sculptures, such as Filippo Della Valle's allegorical figure of Temperance, were replicated and sold in small, terracotta versions as souvenirs of the Grand Tour. A work like Agostino Cornacchini's Sleeping Endymion went straight into a collector's cabinet with bronze and even porcelain copies made from it. The distinguished marble sculptor, Giuseppe Sanmartino, for example, delighted in the expressive qualities of painted terracotta for use in minor works such as the famous Neapolitan nativity scenes. These often contained a vast number of figures that rival the delicacy of porcelain figurines.

Like Michelangelo and Bernini before him, Antonio Canova dominated the artistic scene of his day. Our perception of his art is based upon the miraculous perfection of his finished marbles, but his initial ideas were worked out in clay. Small sketches, such as the Venus and Adonis or Cupid and Psyche, have an extraordinary power and vitality which echoes the Neo-classical pronouncement: ' Conceive with fire and execute with phlegm'. The evolution of Canova's design for the Penitent Magdalen can be traced from a tiny pencil sketch and a clay model to the finished marble. Towards the end of his career, Canova preferred not to fire his clay models, but made plaster casts from them instead. This allowed him to make copies with the freshness of the clay model but the model was destroyed in the process. Canova's use of plaster heralded the end of the great tradition of terracotta in Italian sculpture.