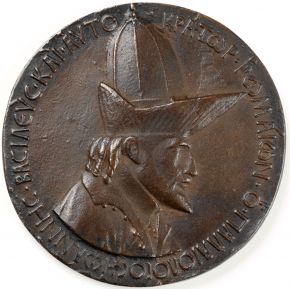 The first medals derived from classical coins and flourished in Renaissance Italy. These early medals celebrate the lives of individuals - rulers and courtiers, military leaders and statesmen, scholars and artists. In 17th century France, the medal became an ideal form for state propaganda. Later, medals were awarded as prizes and military honours, and were commercially produced as souvenirs.

The many national and world fairs that took place in Paris between 1890-1940 greatly benefited French medallists. They were able to show their finest work, but also to make the prize medals and official commemorative medals. After the First World War the languid, curvilinear style of Art Nouveau was replaced by the more modern, hard-edged manner of Art Deco.

The first commemorative medals were made in Renaissance Italy in the 1430s. They marked significant events, people or places, or were intended as propaganda. The V&A has a large collection of commemorative medals. The oldest were cast in small numbers and are now known only in a handful of examples. Others, such as Queen Victoria's coronation medal, were mass-produced.

In contemporary medals the designer often questions the traditional concept of format, appearance and purpose. These medals are best appreciated when held and turned in the hand. Only this will reveal the intimate relationship of one side to other as intended by the artist. Fortunately contemporary medals are one of the most affordable art forms.

Explore medals in Search the Collections