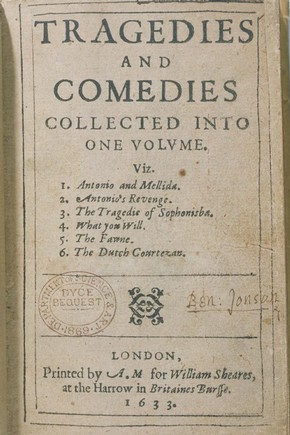 Title page of 'Tragedies and Comedies', by John Marston, printed by A M for William Sheares, at the Harrow in Britaines Bursse, London, 1633. Pressmark: Dyce 25.B.50

The Dyce Collection is one of two very large and distinct collections within the National Art Library, the other being the Forster Collection, bequeathed by John Forster (1812–76). The respective donors were close friends and the transfer of the Dyce Collection to the Victoria & Albert Museum was overseen by Forster, who was Dyce's executor.

The Revd Alexander Dyce was born at Edinburgh in 1798 and died in London in 1869. He bequeathed over 14,000 books to what was then the South Kensington Museum, along with pictures, prints, drawings and other objets d'ar. As a young man Dyce developed a taste for the theatre. This he continued at Oxford and after taking holy orders. He occupied two rural curacies before moving to London in 1825 to further his literary career. He published editions of poets, particularly dramatic. Notably he undertook various editions for the Aldine Poets series published by the bookseller Pickering, and editions of the plays of Middleton and Beaumont and Fletcher. His enthusiasm for the theatre took him to see legendary figures such as John Kemble, Mrs Siddons and Edmund Kean on the stage.

Until her death in 1859 Dyce shared a house with his mother. His growing book collection took up much space, to the inconvenience of the other inhabitants so thereafter he lived in Oxford Terrace. His library grew with judicious purchases of the best and most important editions required for his wide ranging literary and critical editions. His original intention to leave his collection to the Bodleian Library was changed by the persuasive argument that in London his books would be within reach of a larger scholarly audience.

Despite the age of many of the books, the collection has always been in a good condition. During Dyce's lifetime great care of both bindings and text was taken to ensure the condition was maintained. The content is somewhat unusual, for while it includes some of the usual material found in a gentleman's library - notably histories and literature - it lacks county histories, genealogies and topography. Dyce had little interest in such antiquarian pursuits. His studies in divinity are represented by some contemporary theological works, but there is little on the contemporary theological controversy and debate which dominated the 19th century. There are few tracts and little contemporary 'ephemera'. However, there are good editions of the Greek and Latin texts of the Church Fathers. The editions chosen show his grasp of the bibliographically significant, including rarities and ranges of editions. As a scholar he understood the importance of textual analysis and comparison, and the scholarly apparatus accompanying different editions.

There is an abundance of classical secular scholarly works. Dyce collected many very early editions in Greek and Latin of the poets and playwrights Aeschylus, Aristotle, Homer, Livy, Ovid, Pindar, Sophocles and Virgil. These are well-known names, but there are also authors important to classical scholarship but not readily known outside scholarly circles. His wide classical reading informed his approach to English literary work and the editions he read and collected. There are the scholarly works of the 16th and 17th centuries by Casaubon, Heinsius, Salmasius, the Scaligers and Scioppius among others; and of course the great heart of the collections which are editions of English poems and plays from the Elizabethan era to the 19th century. Dyce had a scholarly interest in Italian and French poems, plays, romances, particularly for their influence on the English theatre. His love of the literature of these Romance languages is attested to by the great number of editions of Boccaccio, Dante, Racine, Rabelais and Molière - and again there are choice rare editions of lesser known authors. The library is a treasure house of both literary rarities and of the works required by a mid 19th-century scholar. Only a highly selected flavour of its contents can be given in this brief description.

In contrast to the Forster Collection there are relatively few manuscripts and these are mainly copies of unique or rare plays and poems. But important holdings include the original manuscript of; The Faithful Friends by Beaumont and Fletcher, and The Parliament of Love by Massinger, generally considered to be in the author's own hand. Given that Dyce published an 11-volume edition of the works of Beaumont and Fletcher it is unsurprising to find exceptional editions of their works included in his library. The 1674 collected edition formerly owned by Kemble must take pride of place. There are rare editions of the plays of Aphra Behn, Congreve, Cowley, Davenant, Dekker and Dryden, who is well represented, occupying seven pages of the printed catalogue. Dyce edited works by John Ford and Robert Green, and almost all the early editions of their plays are in his library. There are virtually complete collections of the plays of Ben Jonson and Thomas Heywood in original editions. Several first editions of Lyly's plays include Midas of 1592. There is the first edition of Marlowe's Massacre at Paris and plays by Massinger. Thomas Middleton's works were first collected by Dyce in an edition of five volumes and his library contains a good collection including some first editions.

The list of books under the heading Shakespeare contains the 1623 First Folio (though seemingly made up from different copies), the 1632 Second Folio and rare quartos of individual plays: Much Ado About Nothing, 1600 (1st); Othello, 1622 (1st) and 1639 (2nd); Hamlet, 1611 (3rd); Loves Labours Lost, 1631 (2nd). First and early editions of the related plays are also present such as Sir John Oldcastle, 1600 (1st), and Arden of Feversham, 1592 (1st). In addition the collection holds a substantial number of important books on and about Shakespeare. There is the curious and very early edition of Norton and Sackville's Ferrex and Porrex or Gorboduc, printed by John Daye in about 1570, with a forged autograph purporting to be Shakespeare's. 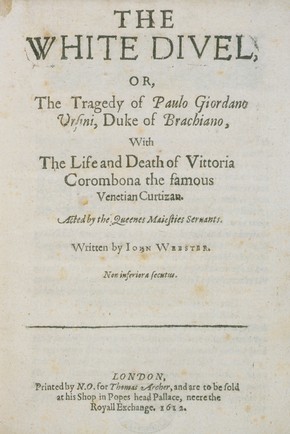 John Webster, another playwright whose first collected edition was published by Alexander Dyce (in four volumes, 1830–39), is represented by first editions of all the most famous of his plays including The White Devil (1612) and The Duchess of Malfi (1623). Another important part of the library is a collection of many playbills of great significance for the history of the theatre and of printing in the 18th century. They exist scattered throughout the collection, as individual items or collected in bound volumes.

Among the novels and poetry the great names are all represented. Those of greatest significance to Dyce can be measured by the number of pages their works occupy in the printed catalogue: Robert Burns, Lord Byron, Goldsmith, Milton (four pages in catalogue), Pope (13 pages). Elkanah Settle, the playwright and poet, whose later hack work touted within fine armorial bindings makes him of particular interest to this library, occupies over three pages of the catalogue and the list includes many controversial pamphlets. The poems of Samuel Rogers are well represented as well as Dyce's edition of the poet's Table Talk. Dyce collected scarce editions of the works of Shelley, first editions of Henry Fielding's Tom Jones and Amelia and many first editions of the romantic novels of Walter Scott. Most of the works of George Chapman are included, some in first edition. Eastward Hoe (1605) contains Dyce's note, 'The leaves E E2 containing the obnoxious passage are inserted'.

In the library are some significant bibliographic treasures amongst which is the collection's earliest printed book, Boccaccio's Genealogiae Deorum Gentilium (Vicenza, 1487). While there are few examples of early English printing there are the late 16th-century first editions of Edmund Spenser, John Gower's Confessio Amantis (1554), John Heywood's Spider and the Flie (1556). As in every collection there are some surprising omissions such as no Chaucer editions earlier than the 17th century, and no Robinson Crusoe earlier than 1755. But such lacunae are more than compensated for by the very many contemporary reprints of literary texts usually from important early and rare editions, for example Alexander Barclay's The Cytezen and Uplondyshman, reprinted by the Percy Society in 1847 from the original Wynkyn de Worde edition.

Many of the editions in the collection are of note because of their provenance and associations, containing rare autograph letters and notes and annotations. The collected edition of John Marston's plays (1633) has Ben Jonson's autograph on the title. There is a French cookery book which belonged to Thomas Gray. Verses in the hand of Sir Richard Steele addressed to Dr Ellis, his headmaster at Charterhouse, are found on the fly-leaf of The Christian Hero (1701).

Presentation inscriptions and autographs abound. Lydgate's Fall of Prynces was 'given by Henry Mordaunt, Earl of Peterborough, to the Benedictine Monastery at Lamspring'. There are autographs by Gray, Richard Bentley, Heber, Richard Porson, Horace Walpole, amongst many others. Dyce himself added notes to a number of his working copies in a small and easily-read hand.

An annotated copy of the printed catalogue ('Dyce Collection : a Catalogue of the Printed Books and Manuscripts, 2 volumes, London, 1875) is still available to consult in the Reading Room.

A Special Reader's ticket is required by members of the public. For more information, see Using the National Art Library.

An alternative copy, if available, will normally be used in preference to the Dyce Collection copy, unless of course the book is required for copy-specific information.

The Forster and Dyce Auxiliary Collection contains books relating closely to the content and subject areas of these two collections.