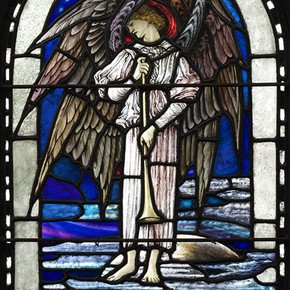 The panels on display in the Sacred Silver and Stained Glass gallery show the technical changes that have taken place in stained glass over the centuries, and also the changing role of stained glass.

Glass is by nature a transparent or translucent medium, so the designer or artist has to consider the play of light as it passes through the window. The thickness and colour of the glass will affect the light, as will any surface decoration such as painting or acid-etching. Medieval craftsmen understood completely the unique properties of stained glass and their methods continue to influence modern artists in this field.

Stained glass is not simply decorative. It is also a medium through which the central messages of the Christian faith, and more recently the Jewish faith, are expressed. This is most obvious with the stained glass from the medieval and Renaissance periods. Literacy was not widespread in those days and the church used stained glass and other artworks to teach the central tenets of the Christian faith. In Romanesque and Gothic churches the window openings were filled with extensive narrative scenes in stained glass. In other words, they were huge and colourful picture storybooks, in which worshippers could 'read' the stories of Christ and the saints and so learn what was required for their religious salvation.

Learn more about the messages in stained glass panels in our Guide to Christian Signs and Symbols .

The making of stained glass picture windows continued in the 16th and 17th centuries, in spite of the political and religious upheavals of the Reformation, but there was a shift in subject matter towards secular, or non-religious, themes. This was accompanied by technical and stylistic developments that changed the nature of stained glass. By the end of the 18th century stained glass windows, in both private homes and churches, had became 'paintings on glass' and no longer relied on lead lines to form part of their design.

In the 19th century, however, there was renewed interest in medieval art, especially that of the church. Artists and scientists worked together to revive the techniques of medieval glass production and decoration, and once again many churches were filled with large and colourful story-telling windows. 20th-century artists, and their successors, built on this tradition but also explored new technologies and new forms of artistic expression, including more abstract approaches.