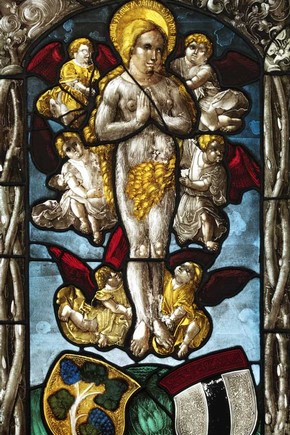 St Mary Magdalene was one of the most devoted followers of Jesus Christ. The Gospels record her presence at the Crucifixion, and Christ appeared to her first after his Resurrection.

Later legends claim that she, like the Apostles, was instructed to spread the word of Christ. One story relates that she sailed from the Holy Land and landed in France, near Marseilles. There she lived as a hermit in a cave. When she died, her body was taken for burial to the nearby town known today as St-Maximin. There is a shrine to St Mary in the crypt of the church there, while the church at Sainte-Baume in Provence marks the site of the cave, and is still a pilgrimage site.

In the 11th century monks came to St-Maximin and stole the body of St Mary, taking it to Vézelay in Burgundy. Throughout the Middle Ages the priests at St-Maximin maintained that the wrong body had been stolen, but Vézelay's position on the pilgrimage route to Santiago de Compostela ensured its claim gained the most support.

Legends about St Mary Magdalene grew over the centuries. The Golden Legend, a compilation of saints' lives written about 1260, records that while she was living in the cave angels bore her up to heaven seven times a day for heavenly food.