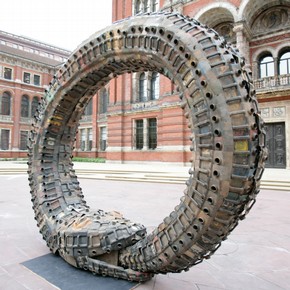 'Uncomfortable Truths: The Shadow of Slave Trading on Contemporary Art' was a series of interventions by eleven international artists, displayed in galleries throughout the V&A in 2007. This was part of a series of events at the V&A to commemorate the bi-centenary of the parliamentary abolition of the British slave trade; a landmark year, not just in British history but in human history.

This exhibition raised many questions, to which there may be no definitive answers: why is slavery so often discussed as something disconnected from the present? Why is transatlantic slavery seen as a black issue rather than a human one, by blacks as well as whites? Why does it take arbitrary anniversaries to bring these issues to the fore? How do we understand the roles of the perpetrators and the victims from our standpoint in the present? What can we learn from the history of resistance to slavery? How has slavery contributed to the benefit - and detriment - of the world we live in now? And, how has this institution, like many others, profited from the wealth generated through slave trading?

These questions all address Uncomfortable Truths, which were explored in this exhibition via the works of eleven international artists. Displayed throughout the V&A's permanent collection galleries and other public spaces, the interventions created a visual dialogue between historic design objects, many rooted in imperialism, and compelling, emotive examples of recent art and design. These creative expressions form a bridge between the safe and anodyne and the unspeakable and indescribable.

Disparate in perspective, execution and intent, the works in Uncomfortable Truths are united by a sense of resistance - not strictly to do with slave rebellion, but in that they resist conventional categorisation: no unthinking sentimentality, unilateral outlooks or easy conclusions. Displacement, moral corruption, and genocide are only part of the story. We must also speak of survival, redemption and the power of collective memory.

A topic like this one cannot be fully explored in one exhibition. The impact of slavery cannot be confined to history books and it is not a subject whose complexities we can ignore. It is my hope that the beautiful, stark and provocative work in this exhibition will incite ongoing scholarship, debate and creativity. 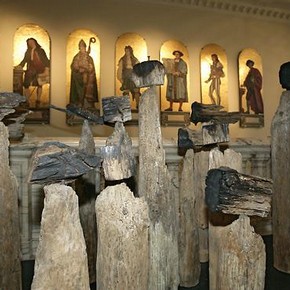 El Anatsui
El Anatsui (b. 1944, Ghana) is one of Africa's most established and celebrated contemporary artists. Embracing a diverse vocabulary of media, he has worked with materials ranging from tropical hardwoods to cassava graters and liquor bottle tops. His extraordinary work has garnered him broad international acclaim and influenced a generation of artists in Africa and beyond. 'Akua's Surviving Children', on display in this exhibition, was originally created in 1996 for the Danish Slavery Project.

Anissa-Jane
Anissa-Jane (b. 1980, UK) seeks to explore the intricacies of identity, ancestry and cultural adaptation in her work. Her own experiences as an African British West Indian woman are integral to her creative expression. Her signature medium is to manipulate brown paper - a representation of her own skin - into sculptural forms.

Read an interview with Anissa-Jane

Michael Paul Britto
Michael Paul Britto (b. 1968, USA) is a video artist living and working in New York. Britto's work immediately elicits strong reactions in the viewer by manipulating and appropriating popular culture to address notions of race and power, cultural norms and social deprivation. This exhibition is the first opportunity to view his work in the UK.

Tapfuma Gutsa
Tapfuma Gutsa (b. 1956, Zimbabwe) sculpts using dynamic combinations of organic materials - from the more traditional media of carved stone and wood to the unconventional shaping of paper, string, drawing pins and gourds. His methods have revolutionised Zimbabwean art practice. He lives and works in Vienna, Austria. Two of his works, 'Ancient Voyages' and 'Tribute to Sango' are on display as part of Uncomfortable Truths.

Romuald Hazoumé
Romuald Hazoumé (b. 1962, Benin) transforms salvaged materials into objects of spiritual power.  In the mid 1980s he began sculptural experiments with the plastic jerry cans dangerously used to transport fuel around Benin. The resulting artworks have received widespread recognition, and have been featured in numerous international exhibitions. The artwork 'DAN-AYIDO-HOUEDO (Arc-en-ciel) symbole de perpétuité', in this exhibition, was commissioned by the V&A.

Lubaina Himid
Professor of Contemporary Art at University of Central Lancashire, and painter, Lubaina Himid (b. 1954, Zanzibar, Tanzania) focuses on issues of history and identity, in particular the creative strategy needed to achieve a sense of belonging. Her work, based on exchanges of ideas and memories, is in the permanent collections of Tate and the V&A. She is represented by Peg Alston New York. The artist has chosen the particular groupings of each of the 'Naming the Money' figures on display.

Read an interview with Lubaina Himid

Christine Meisner
Christine Meisner (b. 1970, Germany) lives and works in Berlin between extensive international travels and artist residencies. The thrust of her artistic output, whether in film, drawing or text, is the experience of the African Diaspora and its representation in contemporary Europe. Uncomfortable Truths features Meisner's video tale 'Recovery of an Image' and two series of delicate and powerful pencil drawings, excavating the experiences of Afro-Brazilian communities descended from slaves.

Read an interview with Christine Meisner

Keith Piper
Keith Piper (b. 1960, Malta) is an influential multimedia artist at the vanguard of black arts movement in Britain. Imperialism and identity are important forces recurring in his oeuvre. Lost Vitrines, featured in this exhibition, was commissioned by the V&A. The works included underscore the complex relationship between 18th century advances in rational thought, commerce and the genteel liberal arts at home, and the violence of slave trading abroad. 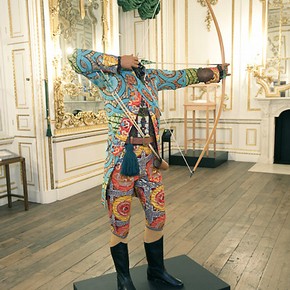 Yinka Shonibare MBE
Yinka Shonibare MBE (b. 1962, UK) has developed an international standing for his elaborate installations of period figures in African wax print textiles. Nominated for the Turner Prize in 2004, the artist consistently merges themes of aesthetics, history and belonging. 'Sir Foster Cunliffe Playing', featured in this exhibition, was commissioned by the V&A.

Julien Sinzogan (b. 1957, Benin) lives and works in Paris, France. After studying architecture in Tashkent and then in Paris, he began exploring the media of drawing and painting. His technique reflects the encounter of different worlds: a 'Western' world in which pictorial representation evolves according to well-defined traditions and an African world, rich in human and psychic interest. The painting 'Gates of Return' featured in this exhibition was commissioned by the V&A.

Fred Wilson
Fred Wilson (b. 1954, USA) is an American artist of Caribbean descent, internationally acclaimed for his incisive and thought-provoking interpretations of the language of museum display. Wilson represented the United States at the 50th Venice Biennale in 2003. His work openly questions issues of imperialism and race. 'Regina Atra', a copy of the British royal crown, is displayed in the sumptuous and regal Norfolk House Music Room in the V&A's British Galleries.