Report on a summer placement at the National Museum of Natural History, Washington DC 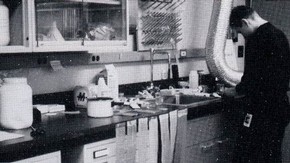 A requirement of the RCA/V&A Conservation Course is that a minimum of ten weeks practical work must be completed in the Studios outside of the academic terms. In the second year it is recommended that students seek placements outside the Victoria and Albert Museum in order to gain experience in areas relevant to their fields of specialisation but not available within the Museum. During my time at the National Museum of Natural History, I was given the opportunity to become involved in all aspects of the conservation work of the laboratory. As a result, I gained invaluable experience not only in a wonderful variety of objects and different methods of conservation, but also in the storage and transportation of objects.

Original storage within the Museum is besieged with problems. The collections have far outgrown their facilities, with objects crammed dangerously into drawers and the collections spilling out into corridors and stairwells. The designated storage areas are contaminated with asbestos and have an enormous problem with insect infestations. In the past the insecticides used have included arsenic and mercuric chloride which have rendered many objects poisonous.

Storage has therefore become the dominant priority of the laboratory and has motivated the relocation of the entire ethnographic collection to new, purpose built, environmentally controlled facilities at the Museum Support Center in Maryland. To preserve the environment at the new facilities all objects are cleaned and stabilised prior to their transfer. The demands of the project have substantially influenced the policies and practices within conservation. Reflecting more generally recognised trends within America, there is a swing towards preventive conservation and away from interventive conservation (ie. intervening with the structure of objects).

There is increasing awareness that the vast majority of damage to objects during their lifetime in museums occurs as a result of poor storage and bad handling. Improvements in storage address both these problems. That a controlled environment increases the longevity of objects is now well understood, but in addition to this, the proper environment for objects also encourages careful handling. When a collection looks uncared for and neglected this is reflected in standards of handling. However, where a collection is professionally cared for it is found that objects are treated with a great deal more respect and caution. My experience at the Museum greatly increased my understanding of the relevance and importance of storage within conservation and the crucial role it plays in minimising damage to objects. 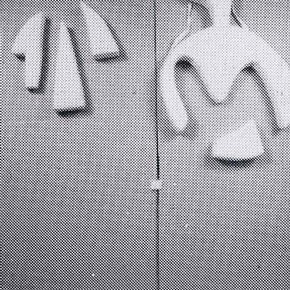 In response to these considerations the provision of a permanent storage mount for all objects that pass through the laboratory is now standard practice. By considered design, these mounts have been developed to give permanent support to damaged objects without the need for structural intervention. The mount can be designed to allow a full examination of the object with-out removal from the mount. Hence the support given by the mount is uninterrupted. The aesthetic of the mount is also given careful consideration. Emphasis is placed on neatness and the use of light coloured materials. This creates an impression of cleanliness and care, inducing respect, while discouraging excessive handling.

My practical work reflected this, being focused on the mechanical surface cleaning of objects and the support of objects through the medium of permanent storage mounts.

Initially the creation of storage mounts within the laboratory was documented and photographed to produce a comprehensive working manual, covering the vast majority of object types found within the collection. I was encouraged to study this and to adapt designs to the specific problems encountered with the objects I was conserving.

In consultation with my supervisors I was able to select a diverse range of objects for treatment. The choice was intended to provide me with experience of different materials often found in association with textiles and with textile related objects, relevant by virtue of the materials present and/or their method of construction. Two Pueblo Indian fur capes incorporated both these elements. The fur had been coiled to produce a yarn and had been incorporated into a twined structure, a primitive form of weaving that does not require the use of a loom. These objects were thus fascinating from the point of view of both materials and techniques.

The most extensive conservation treatment I undertook was the humidification and repair of a Samoan tapa or barkcloth. The humidification was done using a cold poultice treatment and the repairs were executed using Japanese paper and wheatstarch paste. The repair technique was interesting in that holes and slits were stabilised with a series of tiny patches rather than a single patch. This prevents distortion from shrinkage as the water evaporates. Also the bond generated where the fibres overlap at the torn edges of the patches is less likely to suffer from adhesion failure, as the adhesive is better able to key mechanically with both surfaces. 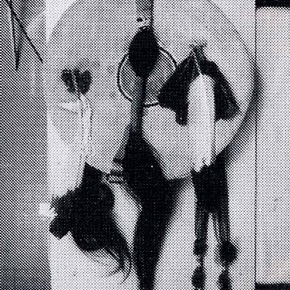 Fig. 3. Example of a shield mounted for storage (click image for larger version)

I encountered a vast range of materials in the` conservation of two Kiowa shields. They incorporated leather, feathers, glass beads, animal horn, metal and textiles. These were being conserved for exhibition and like the storage mounts, exhibition mounting is employed to support any damage of objects. The mounting of the objects must therefore meet conservation requirements and recommendations and requires close consultation. Consequently, part of my responsibility was to advise the designers on appropriate orientation of the shields and the mount-makers on support requirements.

I was also given the opportunity to work with the Move crew on the relocation of the collections and with the unpacking of a travelling exhibition recently returned from a two year tour of Eastern Europe. From these experiences I gained valuable experience in the problems involved in the packing and transportation of objects, acquiring knowledge of the methods used successfully in these cases.

During my placement I therefore benefited from an immense diversity of activities as well as of objects, materials and methods of conservation. I extend my thanks to Greta Hansen and Natalie Firnhaber for their support and encouragement and for the immense amount I learnt under their super-vision. Many thanks are also due to the Friends of the V&A, the Gilchrist Education Trust, the Daphne Bullard Trust, and the Conservation Unit without whose generosity this placement would not have been possible.