The choice for the 2005 RCA/V&A Conservation study trip was between Rome and Warsaw. Rome was the winner, but the timing of our visit would have made either a memorable trip. We arrived in Rome late on Monday 4th April, remarkable only for the fact that the Pope had died three days earlier. The trip was memorable for other reasons too. It included Hazel's first flight, fantastic ice cream and some fascinating conservation visits.

Our first visit was to the Capitoline Museums to learn more about the recent restoration of the sculpture of Pope Urban VIII by Gian Lorenzo Bernini. Dottoressa Elena Bianca Di Gioia, the curator in charge of the project, provided us with the context for the statue both within the Palazzo dei Conservatori and Bernini's work. We then heard from Tuccio Sante Guido, a freelance conservator, on his work to locate and reveal the original surface of the sculpture. Coloured glazes thought to have originated in the studio of Bernini had been identified through analysis. The final decision not to apply a protective coating to the surface seemed strange at first, but was justified when it was explained that any solvents used in the future to remove such a protective layer would also be likely to remove the coloured glazes in the process. As well as explaining the conservation work and tests undertaken he also demonstrated how repairs are made to blend in with the original while still being able to be identified as additions. The visit also included an opportunity to see the statue of Marcus Aurelius - both the original, now removed from the piazza and behind glass for conservation reasons and the facsimile in the piazza. 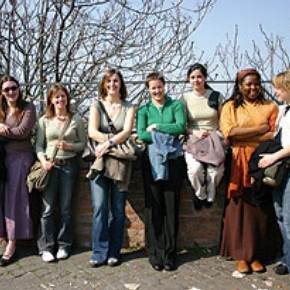 Figure 1. Group outside Church of San Pietro in Montorio overlooking the city of Rome. Photography by Alison Richmond (click image for larger version)

The afternoon included a visit to see the spectacular mosaics at Basilica di Santa Maria in Trastevere. This was followed by a steep hill climb to an amazing view from the pretty Chiesa di San Pietro in Montorio, where the group photo (Figure 1) was taken. Although we had a busy itinerary, our afternoons were free to explore what Rome had to offer. Our first full day included an introduction to crossing roads roman style. (The guide book recommended crossing with Romans or nuns if you wanted to get across in one piece!)

The second day's visit was to ICCROM and included talks from Dr. Nicholas Stanley-Price, Director-General, and Catherine Antomarchi, Head of Collections, on the projects and policies of ICCROM, and the courses and internships available. This was followed by an overview by Dottoressa Rosalia Varoli-Piazza, Senior Programme Co-ordinator, of the interesting work at Villa Farnesina. This highlighted the conservation work recently undertaken and the problems a series of previous restorations can cause. Of particular interest was the campaign during the 1930s to remove 17th century restorations of the damaged azurite of Raphael's studio. We were then given a tour of the Science Laboratories and their work by Dr. Ernesto Borrelli. This was followed by an introduction to the library from Paul Arenson, including the facilities and how to use the search engine. This introduction was useful as the search engine is not straightforward and - we were delighted to find out - photocopies of articles can be ordered from anywhere in the world.

The funeral of Pope John Paul II on Friday meant all of Rome's cultural institutions were going to be closed, so we opted to split into smaller groups that afternoon. Louise and Barbara managed to see the Pope lying in state, with some very kind assistance from the Vatican security guards. This also allowed the unusual opportunity to take photographs of the interior of St. Peter's Basilica, including the Pope! Helen and Alice decided to visit the Pantheon and managed to see the laser cleaning of the ceiling in action. Harriet and Hazel went looking for Gladiators at the Colosseum. Alison and I visited the Villa Borghese and enjoyed the chance to see the completed restoration.

A visit to the Vatican had originally been planned for Thursday, including a chance to visit the Tapestry Conservation Laboratories. Unfortunately the Vatican (understandably), could not receive us but as most institutions were to close for the funeral it gave us an opportunity to see other things that day. The first visit was to the Villa Farnesina to see the work we had been told about at ICCROM. This included an opportunity to see traditional retouching methods called 'tratteggio' (also known as a 'rigatino') in situ. This technique uses dots or lines to fill the gap where restoration has occurred, without trying to recreate what might have been there before.

At the Istituto Centrale per il Restauro we heard about the restoration work of the school from Beatrice Provinciali Rinaldi, Head Restorer Panel Paintings and her colleague Albertina Soavi. Marisol Valenzuela, Head Restorer Polychrome Sculpture, told us about the conservation of some beautiful costumed wooden figures from a nativity crib. We were also given talks about ceramics, glass and metals and it was interesting to learn about the archaeological approach taken with these materials. The course at the Istituto is particularly interesting as it is one of only two in the whole of Italy whose graduates are allowed to work on state-funded projects, including museums and churches.

After lunch there was a long walk across the city and a very steep hill climb to the Villa Poniatowski and Villa Giulia. At Villa Poniatowski we were given a guided tour of the excavations and restoration of the house and gardens by Dottoressa Francesca Boitani, Director of the National Museum of Etruscan Art at Villa Giulia, and her colleagues. This was followed by a talk about the restoration of the Etruscan sculpture of Apollo de Veio, a major conservation project, both privately and state sponsored, which is on open display in the grotto in the grounds of Villa Giulia. The talk showed how a sympathetic earlier restoration could be preserved in a contemporary conservation project. Dottoressa Boitani then kindly showed us sculptures from the same group currently in the process of conservation.

Friday was Pope John Paul II's funeral and Alice was up at 5.30am to get a prime viewing spot; everyone else decided to see what was open on this day. The strangest site was the eerie silence provided by the empty streets - Rome without cars, a rarity. In the afternoon we managed to find one of my personal highlights of the trip - the Capuchin Ossuary at Chiesa di Santa Maria della Concezione. This macabre display includes the bones of monks arranged into intricate decorative patterns in a number of chapels. It certainly started some interesting discussions on the ethics of such a display, as well as the levels of dust!

We departed on Saturday morning, delayed by numerous dignitaries flying home after the funeral and poor visibility on the runway. Despite not seeing the Vatican everyone thoroughly enjoyed the visit. The opportunity to see so many different institutions, museums and churches, not to mention such a beautiful city was particularly special. Also a quick word of advice: in order to see so many sites walking is essential; you could never get through all the traffic in time otherwise and map reading is a vital skill.

We are very grateful to the staff at ICCROM for helping us with the organisation of our visit. In particular, many thanks must go to Elisa Ortiz, Geraldine Fructuoso, and Dottoressa Rosalia Varoli-Piazza.