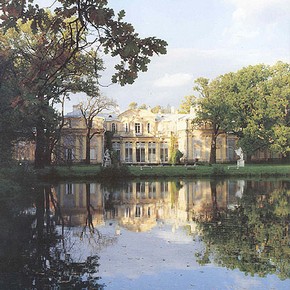 Figure 1. The exterior of the Chinese Palace. Photograph by N Karmazin (click image for larger version)

The Chinese Palace is situated in Oranienbaum, a historical complex of parks and palaces on the southern coast of the Finnish gulf forty kilometres from St Petersburg near Peterhof (Figure 1).

The Palace is truly unique in that much of the dazzling interior decoration, furniture and objects on display are original and date back to the Palace's construction. Oranienbaum has survived a turbulent history and unlike many outlying palaces it remained unscathed during the Nazi siege of St Petersburg. At the beginning of the siege the collections of the Oranienbaum palaces were evacuated. Remarkably it was opened briefly during the war as a sign of hope and encouragement for the people. Other Russian palaces had not fared so well and many were almost totally destroyed. In the post war period funds were therefore allocated elsewhere and the Chinese Palace suffered a period of neglect.

The freezing cold winters, hot summers and wet springs and autumns cause great fluctuations in temperature and humidity. These extreme weather conditions and time have taken their toll on the fabric and interior of the building. The main problems are a leaking roof, rising damp and poor drainage.

In response to the damage the World Monuments Fund (WMF)1 in Britain launched an appeal to assist in rescuing the palace. Funds have been raised and the Chinese Palace Restoration Programme is now underway. Emergency repairs have been carried out on the roof, drainage has been improved and an environmental monitoring system has been installed to take readings from both inside and outside the building. Work has now begun with a view to replacing the roof and repairing and reinforcing the foundations of the building and surrounding terraces.

Another further stage in the Chinese Palace Restoration Programme is to address the damage occurring to the interior decoration. I was approached by the WMF in Britain to join a team of conservators to assist with this part of the programme.

I travelled to St Petersburg in May 2005 for a two-week visit together with Will Black (Russian Projects Director, WMF), Jürgen Huber (Senior Furniture Conservator, Wallace Collection) and Karl Stacey (Independent Restorer). Our main remit was to help set in motion a programme of works for the conservation of what is perhaps one of the most dazzling of all the rooms, The Glass Beaded Salon (Figure 2). 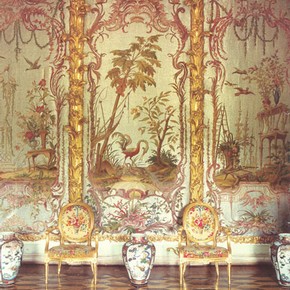 The park and palace ensemble dates from the start of the eighteenth century. Former residents have included Prince Menshikov, the founder of the Oranienbaum estate, and later Tsar Peter III. Both had palaces built there. In 1762 Oranienbaum was the setting for one of the most dramatic episodes in Russian history - Catherine the Great's seizure of power. Whilst in residence at the estate Tsar Peter III was arrested and overthrown by a court coup led by his wife. After his deposition, he was imprisoned and soon after assassinated by Alexei Orlov, Catherine's accomplice and brother of her lover Gregory Orlov.

After her seizure of power the Empress Catherine II made her first commission as Tsarina. She wanted a private estate (Dacha) to be built within the grounds of the Oranienbaum Park. Two pleasure pavilions were constructed for her on the estate, the Chinese Palace and The Sliding Hill Pavilion which included a 532 m long sloping structure, designed for riding down in special carriages with wheels. The two were built as part of an effort to charm and dazzle Europe and as a place for entertaining Catherine's friends and lovers during the summer white nights, when daylight prevails for twenty-four hours.

The Chinese Palace has been described as the unique example of Rococo art in Russia and one of the most exquisite monuments of Rococo style in Europe. It was built between 1762 and 1768 by Antonio Rinaldi with the help of some of the great craftsmen and artists of the day including Giovanni Tiepolo, Guiseppe and Serafino Barozzi. The Palace consists of 17 rooms. The wealth and variety of their décor is breathtaking. Mythological paintings, painted silk, scagliola and delicately modelled stucco work adorn the ceilings and walls while the intricately patterned floors, designed by Rinaldi, have been executed using many different varieties of rare local and foreign wood. The Chinese Palace was so named at the end of the eighteenth century due to the style of decoration in four of its rooms. Chinoiserie, being a trend within the Rococo movement, was in architectural vogue in England at the time and was very much admired by Catherine.

The walls of The Glass Beaded Salon are covered with 12 panels depicting fanciful scenes of birds, flowers and exotic landscapes. These scenes, surrounded by pink scrolls, leaves and other Rococo motifs, have been intricately embroidered and are set against a backdrop of shimmering white glass beads. The vast palette of colours used in the embroidery retains much of its original vibrancy. Serafino Barozzi designed the panels, which were all sewn by Russian seamstresses using locally made glass bugle beads.

The panels are surrounded by richly carved and gilded frames (Figure 3). These comprise palm-tufted columns (approx. 300cm x 16cm), garlanded with exotic flowers and horizontal ornamented sections, which reflect the Rococo detail, embroidered in pink, on the main panels. 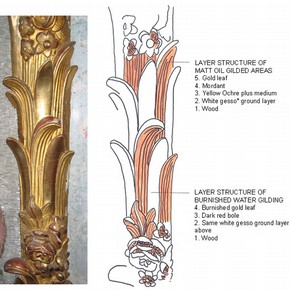 The carved frames are both oil and water gilded. The combination of the two techniques makes the framework gleam and glisten: the oil-gilded areas give a pearly glow in contrast to the sparkling burnish of the water-gilded highlights. Astonishingly, the room originally contained a glass floor made in floral patterns with different sections of coloured glass. This was later replaced with the current floor, which follows the original glass design using different timbers. One can only imagine the scintillating effect of the glass floor, beaded panels and twinkling burnished gold when lit by candlelight.

The overall condition of the carved and gilded architectural framework is very good. The worst damage occurred when the frames and embroidered panels were quickly dismantled, stored and subsequently re-installed during and after the war. Physical damage resulted in small losses to the carved detail and gilded surface. The textile panels however are extremely fragile. Due to weakened fibres they are sagging and unable to hold their own weight. They are in urgent need of attention.

A preliminary step in the conservation of the interior of the room began last year when Jürgen Huber was invited to carry out a condition survey of the gilt wood elements, propose treatments and contact conservation professionals for this visit. The survey of the gilt wood elements showed some areas of lifting and active flaking of the gilded surface. Consolidation of these areas will need to be carried out before any other work proceeds.

The emphasis of our visit was to initiate professional collaboration and establish relationships in order to set a programme of works in motion. It was important to liase closely with staff at the Palace and Russian experts to exchange knowledge and ideas. The head curator of the Palace, Vladimir Klementyev has spent years studying original bills for craftsmen and artists' work at the Palace. His research resulted in a great understanding of how the Palace originally appeared and which parts are later additions or repairs. His knowledge is invaluable for any conservation or re-instatement of original schemes

During the visit we carried out further investigations of the room with Russian gilding conservators, from KGOP2 (The Russian equivalent of English Heritage) and the Chinese Palace. We were able to confirm that the majority of the gilding on the carved architectural frames is the original eighteenth century scheme. It is quite rare to find original gilding on interior architectural decoration, which is often re-gilded many times. Methods and materials proposed for consolidation of the gilt wood frames were also discussed and agreed with these gilding conservators.

We also discussed environmental control and housekeeping with staff at the Palace. They have their own climatologist and the problems of deterioration caused by adverse environmental conditions are well understood and controlled to the best of their ability with limited resources and equipment. The staff work extremely hard to ensure the Palace is well cared for and they have a very good housekeeping regime. We have together been able to identify what equipment will be needed by staff to help with the existing programme of care and what equipment is needed for conservation work on the interior to commence such as lighting, lightweight scaffolding etc.

To further develop relationships WMF in Britain kindly arranged visits to other institutions. As well as visiting the recently restored palaces and gardens of Peterhof and Tsarkoe Selo we were taken round the Furniture and Gilding Conservation Studios at The Hermitage Museum in St Petersburg. The recently restored palaces demonstrate the wealth of extraordinary craftsmanship and conservation skills in Russia. This is possibly due to the tradition of handing down skills through apprenticeship, or from father to son, which is still very much alive today. Whilst visiting the conservation studios we met two father and son teams working there.

Our trip has helped to highlight the practicalities, which need to be addressed to allow the proposed programme of work for the conservation of The Glass Beaded Salon to commence. During the two weeks it became apparent that bureaucratic requirements can be quite complex.

Logistical problems have been addressed such as when the first stage of consolidation could begin. This would have to be in the warmer months so the internal temperature is warm enough for materials to work. Furthermore the implications of conservation works proceeding at the same time as allowing public access will need to be addressed.

Funds are now available for the treatment of the room and with initial research carried out works are due to start soon. Russia is a truly magical place and I thoroughly enjoyed my time there. It was a great pleasure and very valuable to meet the Chinese Palace staff and fellow professional conservators there.

I would like to thank the WMF in Britain and Jürgen Huber for inviting me to participate as a consultant on such an interesting project, our hosts  - particularly Vladimir Klementyev, Elena Harkova and Tatyana Korolyova for their warm reception and tour of the Oraninbaum Estate, Ivan Garmanov for his time showing us round the Hermitage. I am grateful to Amy Anderson for reading through this text and making helpful additions and adjustments.

1. The World Monuments Fund (www.wmf.org.uk) was founded as a charity in 1965 in New York and is the foremost private non-profit making organisation to work with local communities and partners. So far WMF has helped to stem the loss of more than 400 important sites in 80 countries. The UK office is leading the Chinese Palace restoration programme (tel: 020 7730 5344).
2. Komiteta po gosudarstvennomu kontroliu, ispol'zovaniiu i okhrane pamiatnikov istorii
i kul'tury Sankt-Peterburga (In translation: Committee for State Control, Use, and Preservation of
Monuments of History and Culture of St. Petersburg).