1858 Exhibition of the Photographic Society of London 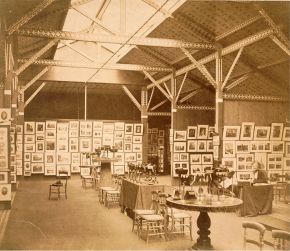 Charles Thurston Thompson, 'Exhibition of the Photographic Society of London and the Société française de photographie at the South Kensington Museum, 1858', 1858. Museum no. 2715-1913, © Victoria and Albert Museum, London

On 12 February 1858, Henry Cole, the founding director of the South Kensington Museum, recorded in his diary:

'Museum: Queen &c came to private view of the Photographic Socy, being the first exhibition in the Refreshment upper room'.

The exhibition was not only the first to take place in that part of the museum. It was in fact the first exhibition of photographs to be held in any museum. Consisting of 1009 photographs, it was organised by the Photographic Society of London and included approximately 250 contributions from its French counterpart, the Société française de photographie.

As the Museum's official photographer, Charles Thurston Thompson recorded the 1858 display with his camera, creating the earliest known photograph of a photographic exhibition. The view shows a densely-packed display of a wide range of subject matter, including portraits, landscapes, architectural views and reproductions of works of art, with even more photographs viewable through stereoscopes crammed onto tables in the middle of the room.

Today, the V&A (as the South Kensington Museum came to be called) holds numerous photographs shown in the 1858 exhibition. Three of these works are visible in Thompson's view: William Lake Price's Don Quixote in his Study, Roger Fenton's Head of Homer and Thompson's own Oak, Albury Park, Surrey. Other photographs in the V&A Collection that were also shown at the time but do not appear in the Thompson image include works by such major 19th-century photographers as Gustave Le Gray, Edouard Baldus and Francis Frith.

The images below were all featured in the 1858 exhibition.

The Photographic Society (now called the Royal Photographic Society) had been holding annual exhibitions since 1854 but the 1858 display was the first to be hosted by a museum. Despite the novelty of the location and many favourable reviews, 'There are many singularly beautiful pictures, upon which we gaze and gaze until we find ourselves transported in thought to the scenes so faithfully represented,' exclaimed The Art Journal (1 April 1858), attendance was low, and the exhibition was relocated to a more central venue near Piccadilly.

The Photographic Society exhibitions featured many genres of photography that are still common, such as portraits, landscapes and still-lifes. Also included were photographs of paintings and negatives, which today would not normally be exhibited in an art museum but which reflected the interest at the time in the multiple uses to which the new medium of photography could be put.

Critics in the mid 19th century were engaged in a debate about the nature of photography as a science or an art. One writer for the Athenaeum, however, found the two categories of work gracefully melded together in the 1858 exhibition:

'Altogether, whether for light and shade, breadth and dignity, atmosphere and detail, this Exhibition is an advance on the efforts of last year. The artists go on boldly, and are not afraid to be chemists; the chemists gain courage, and long to be artists' (Athenaeum, 20 February 1858).

Photographs from the 1858 exhibition in the collection

The Thompson view of the 1858 exhibition is emblematic of the V&A's long history of collecting and exhibiting photographs. The Museum began collecting photographs in 1852. Although it did not acquire any work directly from the exhibition, a number of photographs shown in 1858 subsequently entered the collection.

In 2009, V&A curators identified over 40 photographs now in the V&A collection that were included in the 1858 exhibition. (Since photographers often produce multiple prints of the same image, these photographs are not necessarily the exact prints displayed.) In addition to the works pictured above, they include other examples from Robert Howlett's series on the launching of the Great Eastern, further travel views by Francis Frith and tree studies by Charles Thurston Thompson, a still-life by Francis Bedford and an architectural view by Henry Holden.

The range of holdings that can be linked to the 1858 exhibition reflects the depths of the V&A's collection of 19th-century photography. The V&A not only held the first museum-based exhibition of photographs but it continues to acquire and exhibit historical and contemporary photographs today.