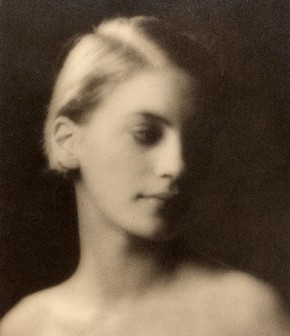 Lee Miller (1907–1977) is one of the most remarkable female icons of the 20th century - an individual admired as much for her free-spirit, creativity and intelligence as for her classical beauty.

Lee Miller was born in Poughkeepsie, New York, in 1907 and became one of the great beauties of her time. She was photographed constantly by her father, Theodore Miller, an amateur enthusiast. She suffered rape at seven, contracted gonorrhoea and endured years of painful and invasive treatment. Perhaps these experiences made her a Surrealist before she ever went to Paris. Her name transmuted from Elizabeth to Li-Li to Lee.

In 1927 she began her modelling career on the cover of American 'Vogue', and was photographed by the greatest talents of the day. Perhaps because of her training in theatre arts, in Paris in 1925 and afterwards at Vassar College, she excelled in enacting the narratives of fashion photography. In 1929 she sought out Man Ray in Paris and became his pupil, lover and muse. She also starred in Jean Cocteau's landmark film 'The Blood of a Poet' (1930). 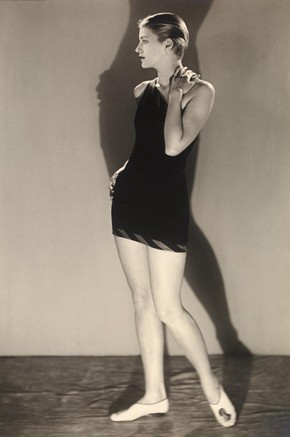 Lee Miller was not only the muse of Man Ray but his apprentice and soon his collaborator. She learned from one of the greatest modern photographers, mastering lighting, printing and the process of 'solarization' - a way of reversing highlights into blacks - they discovered together. She created a self-portrait titled 'lee miller par lee miller' and contributed to Paris 'Vogue' as both model and photographer. She made portraits and satirical drawings, photographed enigmatic street scenes, elegant near-abstractions and images like 'Exploding Hand' which exemplify the 'convulsive beauty' preached by the founder of Surrealism, André Breton. She also created some of the most radical photographs of the nude of the Surrealist epoch - nudes which have been described as transforming the female torso into a phallus.

Lee Miller set up her own studio in New York in 1932. She prided herself on putting in the sophisticated lighting system and the electric wiring herself. Despite the Great Depression, she worked in celebrity portraiture, fashion, advertising, as well as appearing, uniquely, as both model and photographer in a fashion shot for American 'Vogue'.

Lee Miller exhibited at Julien Levy's pioneering art gallery and enjoyed a close rapport with the sculptor Joseph Cornell. A highlight of the New York studio was the commission to photograph the cast of 'Four Saints in Three Acts', an avant-garde opera with a score by Virgil Thompson and a libretto by Gertrude Stein. This broke new ground with its all-black singing cast and inspired George Gershwin's 'Porgy and Bess' the following year.

In July 1934 Lee Miller married Aziz Eloui Bey, a member of a prominent Cairo family. On first moving to Cairo in 1934, Miller was still in recovery from the antipathy to photography which had afflicted her at the end of her time in New York. However, she regained her interest in the medium and photographed in Egypt from 1935-39. She saw the desert monasteries of Egypt with an eye educated in the 'moderne' forms of Le Corbusier. Her masterpiece, 'Portrait of Space' (1937), taken near Siwa in the Western Desert, has the ambiguity of a Magritte painting - it was photographed on an expedition made soon after Miller returned from a summer spent in Europe with her Surrealist friends (celebrated in her wonderfully hedonistic photographs).

Lee Miller returned to Paris in 1937, met and fell in love with the British Surrealist painter Roland Penrose, and travelled with him in England and France. The following year she photographed extensively in Romania, travelling with Penrose and the musicologist Hari Brauner. 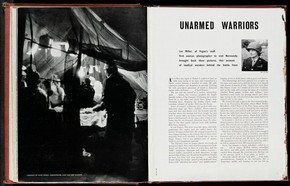 Lee Miller moved to London in 1939 to live with Roland Penrose. She trained her Surrealist eye on the chaos of Blitzed London for her first book, 'Grim Glory' (1940). She started working for British 'Vogue' in 1940 and became the magazine's 'work-horse' and most prolific contributor. Miller took on every kind of photographic assignment for the magazine, whether documentary, portraiture or fashion. She began writing feature articles in 1944 with a profile of the American radio broadcasting star Ed Murrow. The 'Life' photographer David E. Scherman became her mentor in photojournalism, her lover and friend. Soon she was flying to France as an accredited war correspondent for 'Vogue'. The magazine published Miller's searing despatches on field hospitals in Normandy, the Liberation of Paris, the fighting around the German-occupied citadel in St Malo, the death camps of Dachau and Buchenwald, and finally the banality of Hitler's apartment in Munich. 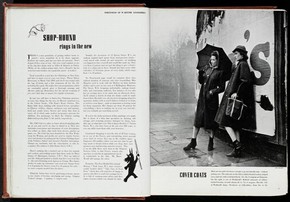 The post-war period was an anti-climax for Lee Miller after the heroics of the war. She married Roland Penrose in 1947, the year their son Antony was born. Although commissions from British 'Vogue' were often routine, Lee Miller thought-up interesting projects of her own and continued to write with arresting verve. Her final photo-essay for 'Vogue' was also her funniest: 'Working Guests' appeared in July 1953. Like many of Lee Miller's activities it was about turning the tables - this time, with wicked merriment, on the distinguished guests who arrived at the Miller/Penrose house in Sussex to be set household tasks. Painter friends weed borders and tack curtains, while Alfred H. Barr Jr, founding director of The Museum of Modern Art, feeds swill to the pigs and the 'New Yorker' cartoonist Saul Steinberg wrestles with a garden hose. The series closes with the hostess enjoying a well-earned nap.


This content was originally written in association with the exhibition 'The Art of Lee Miller', on display at the V&A South Kensington from 15 September 2007 – 6 January 2008.