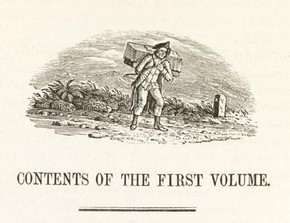 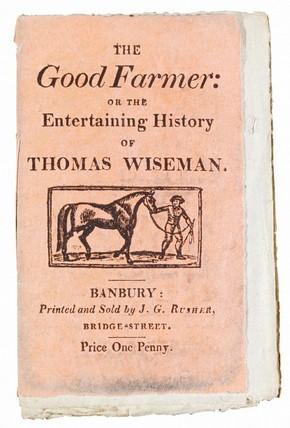 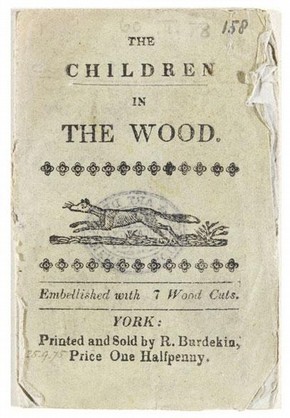 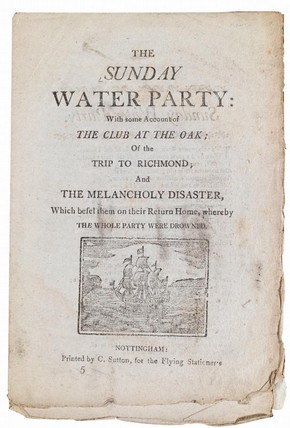 The National Art Library chapbook collection comprises around 800 chapbooks, ranging from the late-18th-century crudely printed chapbooks of Bow Church Yard and Aldermary Church Yard, London, to the simple but rather well-printed and illustrated examples by James Kendrew of York. The National Art Library's chapbooks come mainly from the Renier Collection of Historic and Contemporary Publications for Children, the Forster Collection, the Guy Little Bequest, and the Children's Books Collection. The chapbooks from the Forster Collection have been bound in several volumes and include a great number of song books – also known as 'garlands'. At least two of those volumes had been originally put together by the Newcastle bookseller John Bell (1783–1864).

What is a chapbook?

Chapbooks are small cheap publications of a popular nature purchased either at booksellers in towns or from chapmen (from early English 'ceap' meaning trade) and pedlars in rural areas. Intended for people with little money to spare, they were generally printed on poor paper often using old and battered type and woodblocks.

They were typically priced at 1/2d. or 1d., but occasionally the price could be as high as 6d. Mostly they were printed on a single sheet of paper (or a portion of it) folded to make from 8 to 32 pages.

The term chapbook, as it is used today, dates from the early 19th century. Its first use, according to the Oxford English Dictionary, is in Thomas F. Dibdin's The Library Companion or The Young Man's Guide and Old Man's Comfort  in the Choice of a Library (London, 1824):

'It is a chap book, printed in a rather neat black letter, and embellished with several spirited and not ill-drawn woodcuts …'

Although 'chap book' was used in the publishing and bookselling trade, it is not clear what type of publication was covered by the term. Its earliest appearance seems to have been in the advertisement that the London publisher Richard Snagg placed in 'The Cumberland Pacquet' in 1774, which read:

'New chap books. This day are published, price 9d. each bound. Printed for R. Snagg, no. 29, Pater-Noster-Row, and sold by all the booksellers in the country …'

These were abridgements of contemporary novels in 64 pages with a copper-engraved frontispiece - more substantial publications than today's definition of a chapbook.

Chapmen travelled through the country carrying big knapsacks and selling cheap publications and ballads, together with all sorts of other wares: needles, thimbles, scissors, writing paper, ribbons, cloth, etc. They also reported news and delivered messages from farm to farm. They were generally rather literate and many of them wrote poetry and stories. People entered this trade often because they had some physical disability which did not allow them to do other regular jobs. Typically in the late 18th century they would buy a dozen ballads for 2d and resell them for 1/2d each.

Chapbooks cover a wide variety of literary genres. Here we may mention some of the most common:

Chapbooks were produced from the 16th to the early 20th century and played a particularly important part in the spread of popular culture due to their very high print runs. Around 200,000 chapbooks were printed yearly in Scotland in the 18th century, while an inventory of the stock of the 17th-century London printer Charles Tias shows that he had paper set aside to print  around 9000 chapbooks. These high printing numbers also bear witness to the fact that literacy level in Britain were higher than one might suspect.

Chapbooks have long been collectable items and some notable early collectors include Samuel Pepys (1633–1703) and James Boswell (1740–95). Samuel Pepys collected chapbooks mainly in the 1680s and had them bound in volumes in broad genres: Vulgaria, Penny witticisms, Penny merriments, Penny Godlinesses. His collection is now at Magdalene College, Cambridge.

James Boswell's interest in chapbooks seem to have been more nostalgic as an autographed note in one of the bound volumes of chapbooks, now at Harvard University Library, reads:

'Having when a boy, been much interested with 'Jack the giant killer' and such little story books, I have always retained a kind of affection for them, as they recall my early days. I went to the printing office in Bow Churchyard [in 1763] and bought this collection and had it bound up with the title of '"Curious productions"…' 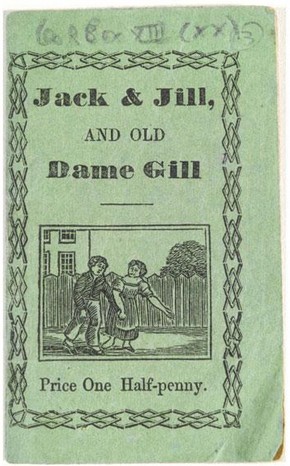 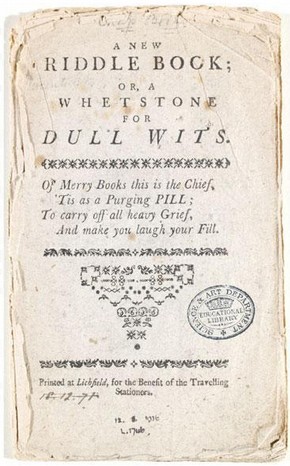 The complete collection is available on the . A A Visual Register of the chapbooks in seven volumes is available at the Main Counter upon request, and a bibliography of the Library's holdings by John Meriton Small Books for the Common Man: A Descriptive Bibliography (The British Library, 2008) is also available

The National Art Library is leading a group of institutions towards the creation of 'The English chapbook database'. This digital catalogue of chapbooks and related ephemera printed in the British Isles and elsewhere in the English language has been established under the aegis of the Bibliographical Society .

Chapbooks are recognized as a vital resource for the study of early-modern to nineteenth century western popular culture. The aim of the project is to create a database of chapbooks printed in the Baritish Isles and in English elsewhere which are publicly accessible in the UK. This database would take the form of a Union Catalogue with multiple holdings attached to individual records and, eventually, with links to digitized images of the full texts. Such a database would allow research not only into popular culture, but also into local history, and the history of images and their transmission. 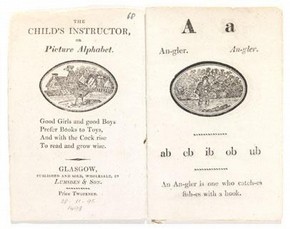 'The child's instructor', Glasgow : Published and sold by Lumsden

A Chapbooks Executive Committee has been established with the following membership:

The first stage of the project is the mapping of chapbooks collections in the British Isles and a questionnaire has been prepared in this respect which institutions with chapbooks holdings are kindly required to respond to. The chapbook definition and the images available on these web pages may serve as an aid to recognize the type of publications which fall within the scope of the project.