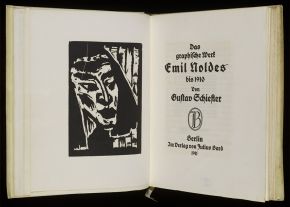 The Fischer Collection is one of a number of 'closed' collections held by the V&A’s National Art Library. It was given to the Museum by Elfriede Fischer, the widow of Heinrich (Harry) Fischer, in 1996. The collection contains 69 books, journals and exhibition catalogues published chiefly in Germany between 1900 and 1939, plus a highly significant typescript inventory of 'Entartete Kunst' (or 'Degenerate Art') created in 1941/2.

Heinrich Robert "Harry" Fischer was born in Vienna, Austria, on 30 August 1903. He established himself as a book dealer and was running one of Vienna's largest bookshops by the mid 1930s. The Nazi annexation of Austria forced him to flee to Britain in 1938. During World War II he served in the British Army’s Pioneer Corps, an auxiliary unit joined by many Austrian and German refugees. Fischer went on to become one of the founders of Malborough Fine Art in 1946. He became a naturalised British citizen in 1947, and established Fischer Fine Art in the early 1970s. He died in London on 12 April 1977. 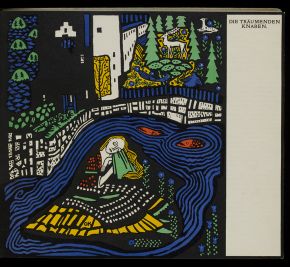 Fischer collected most or all of the material during the late 1960s and early 1970s, with a view to donating it to the V&A. The collection includes books by or about George Grosz, Wassily Kandinsky, Paul Klee, Oscar Kokoschka, Emil Nolde and Kurt Schwitters, among others. The collection also reflects the work of publishers, writers, illustrators, typographers and designers, and shows the relation of the artist to the book. Works of Expressionism, Dada and the Bauhaus are well represented. Many of the publications are distinctive landmarks of their time, and all retain their original format. As such, the collection enhances the Library's holdings relating to German and Austrian publishing in the early years of the 20th century.

The Fischer Collection includes the important 'Entartete Kunst' typescript inventory of works of art removed from German museums and art galleries by the National Socialist (Nazi) government. The two-volume list was compiled by the Reichsministerium für Volksaufklärung und Propaganda (Reich Ministry for Public Enlightenment and Propaganda) in 1941/2 and is one of the key sources on the provenance of works of confiscated ‘Entartete Kunst’. Two earlier versions of Volume 1 (A-G) are held by the Federal Archives in Berlin, and one of these includes some information about the fate of individual artworks. Until the Fischer collection was donated to the V&A, it was thought that much of the information covered by Volume 2 (G-Z) had perished.

Find out more about the Entartete Kunst inventory.