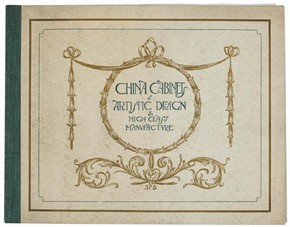 Although the emergence of trade catalogues has not been systematically studied, it is generally assumed that catalogues developed from pattern books of engraved designs for use by craftsmen in their workshops. These could easily be adapted to produce catalogues of goods for sale which could be sent out to clients. Few of the earliest examples survive today but the National Art Library holds a copy of Thomas Chippendale'sGentleman and Cabinet-maker's Director (1754), a book of furniture designs. This has been claimed by many as an early example of a trade catalogue as it also advertised furniture which could be ordered from Chippendale's London factory.

The first true modern trade catalogues produced in England with the specific purpose of selling goods were produced by the brassfounding and Sheffield plate manufacturers of the Midlands. They had certainly appeared in England by the 1760s. The Museum holds examples of these engraved catalogues, available through the Print Room (see W.A. Young in the bibliography below), but specific manufacturers cannot usually be identified as any title pages the publications may have contained have generally been removed. Another early industrialist producing ceramics catalogues was Josiah Wedgwood. The National Art Library holds numerous early editions of catalogues such as the Catalogue of Cameos, Intaglios, Medals and Bas-reliefs with a General Account of Vases and Other Ornaments After the Antique ... (1773).

By the mid-19th century, trade catalogues had become a common method for manufacturers and retailers to advertise their wares. The National Art Library holds numerous examples of catalogues from the 19th and 20th centuries and is particularly strong in English and French material. The Library has a good collection of furniture catalogues, with substantial holdings for metalwork and fashion. Other areas include jewellery, glass, fur and domestic appliances as well as catalogues from major retailing outlets. These include catalogues from department stores such as Harrods and the Army and Navy Co-operative Society in the UK, Montgomery Ward & Co. in the USA, and the Grands Magasins du Louvre, Au Bon Marché and Au Printemps in France. The Library also has catalogues produced by a number of manufacturers who exhibited at the Great Exhibition of 1851.

Trade catalogues from the 20th century represented in the National Art Library collection include many high profile companies. Also represented are a number of limited edition finely printed catalogues, many of which were produced in France in the first quarter of the 20th century. Many well-known artists and illustrators collaborated on these catalogues. They include the celebrated early fashion catalogues of Paul Poiret illustrated by Paul Iribe (1908) and George Lepape (1911). Other examples include those printed for a variety of firms by the Draeger Frères, well-known for the quality of their printed booklets for the luxury industries. 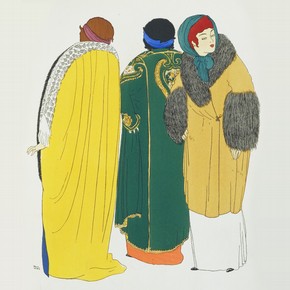 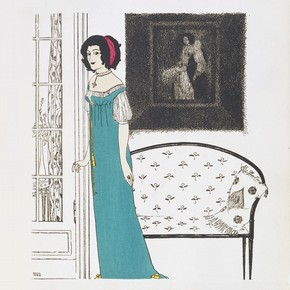 In 1990 the National Art Library initiated a scheme to collect trade catalogues from a selected list of manufacturers and retailers on a regular basis. Firms included in this project broadly reflect the research interests of the V&A. The Library's holdings of trade literature are also significantly enhanced by a number of other specific collections.

Jobbing Printing Collection
In 1936 the National Art Library initiated a collection of examples of commercial printing and design. Examples of trade catalogues and other printed ephemera such as magazine covers, trade cards, wine labels, advertisement proofs, menu cards, etc. were collected. The bulk of the collection consists of items from the 1930s, especially 1936-9, with a smattering of items from the 1940s. The collection is further supplemented with material from the 1960s which the Library inherited from the Museum's Circulation Department after its closure in 1978. These two groups stand as historic collections and any further examples acquired by the Library have been individually catalogued and have not been added to this collection. Firms represented in the Jobbing Printing Collection include Shell-Mex, Austin Reed, Guinness, Heals, Imperial Airways and Orient Line. Designers include Edward McKnight Kauffer, El Lissitsky, Edward Bawden, Herbert Bayer, Eric Gill and Jan Tschichold. Categories of material include architecture, broadcasting, costume, interior design, the motor industry and food and drink. The collection comprises around 4000 individual items.

EKCO Collection
In 1993 the National Art Library purchased the EKCO Collection of trade catalogues. This is a collection ofaround 1000 trade catalogues, promotional leaflets and associated ephemera collected by E.K. Cole Ltd (EKCO Radio Co.) between 1935 and 1940. It also includes some items on electrical goods and radio components collected during the 1940s and 1950s. The collection comprises trade catalogues from a range of different manufacturers broadly arranged into subject areas which include: bathrooms, building supplies, doors, electrical goods, fireplaces, floor coverings, furniture, glass and china, kitchen equipment, lighting, luxury goods, office furniture, paint, provisions and food, sanitary ware. There are also catalogues relating to wartime activities including plans for air raid shelters and samples of blackout material. While the history of the collection is undocumented, the catalogues were probably collected by the firm to keep abreast of current trends in design. Many catalogues were also requested in order to supply information on possible purchases for e.g. building projects undertaken by the company. Many of the catalogues are accompanied by letters from the firms in question to E.K. Cole Ltd.

The EKCO Collection does not include catalogues relating to EKCO radios or to other E.K. Cole Ltd. products.

Other collections of trade catalogues
The Library holds a complete set of Liberty Catalogues from the years 1881-1949. The Archive of Art and Design also holds around 1600 trade catalogues within particular archive groups, for example the Heals archive.

Individual trade catalogues acquired from 1987 onwards are listed on the Computer Catalogue. The EKCO Collection and Liberty Catalogues have also been completely catalogued; details of individual items from these collections can be found on the Computer Catalogue. In addition there is a separately published list of the Liberty Catalogues, which are also reproduced in full text on microfiche. A selection of trade catalogues from the late 18th century to 1939, from the Library's collection has been published on microfiche as Trade Catalogues in the Victoria and Albert Museum (Mindata, 1986).

The Jobbing Printing Collection is not yet catalogued in detail, but a hand-list is available on request.

The Jobbing Printing Collection and Liberty Catalogues form part of the NAL's Special Collections to which access is restricted. An appointment is necessary for access to material held at the Archive of Art and Design.