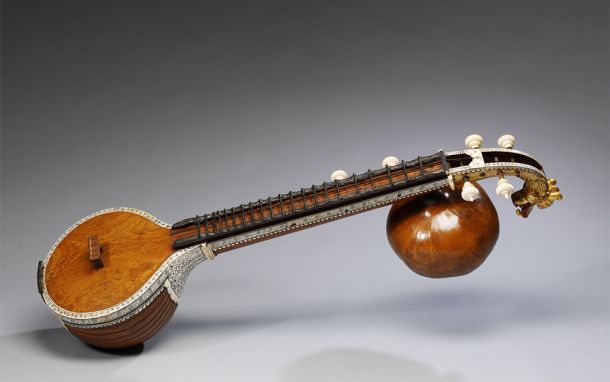 Saraswati is the goddess of knowledge, and the systematic arrangement of sounds into the musical scale is attributed to her. In paintings, she is often represented holding the vina. The Saraswati vina is also known as the Tanjore vina and is associated with the southern Indian or Carnatic tradition of classical music. It is a plucked instrument usually played by fingers, but sometimes it is also played with a mizrab (plectrum), which is worn on one of the fingers. As well as denoting a specific type of instrument of great antiquity, vina is often used as a generic name for any stringed instrument in India. Over eighty kinds of vinas are documented in the Indian musical tradition.

The Saraswati vina usually has twenty-four metal frets set in wax so that they can be readjusted when required. However, this particular instrument was called ‘shruti vina’ by the ethnomusicologist Rajah Sir Sourindro Mohun Tagore, who gave it to the V&A in 1890, because it has twenty-one frets (twenty-two counting the bar at the top end of the neck) dividing the notes from each other and shows the twenty-two intervals that exist in the Indian equivalent of the octave. A shruti vina belonging to S. M. Tagore was the subject of a detailed study by the musicologists A. J. Ellis and A. J. Hipkins, who established the exact pitches of the notes with a tuning fork tonometer in 1886. By this date several European musicologists had become interested in Indian music and were carrying out their first serious studies of it. 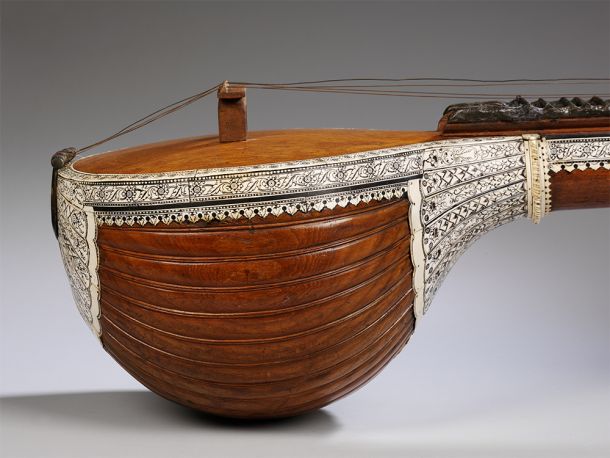 This elegant instrument is beautifully decorated with veneer of ivory engraved and filled with black lac, a technique typical of Vizagapatam. The tuning pegs are of carved ivory, and those belonging to the sympathetic strings are placed along the neck of the vina to one side. The neck of the instrument turns downwards and ends in a splendid gilded monster’s head. This is a common motif of the Saraswati vina and contributes to the splendour of this example. 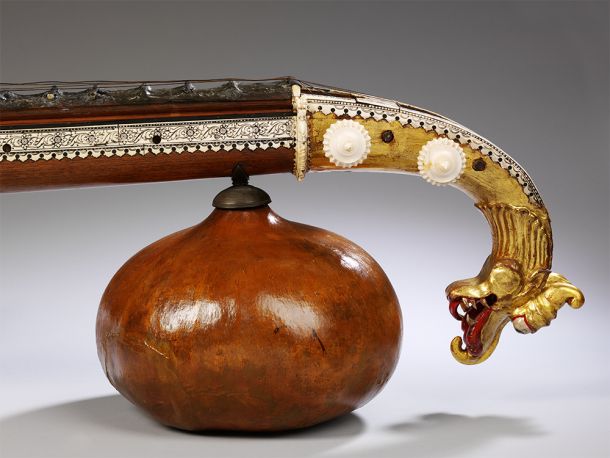 S. M. Tagore gave large collections of Indian musical instruments to museums across the world, including the V&A. Other examples of his instruments are included in the Musical Wonders of India project.