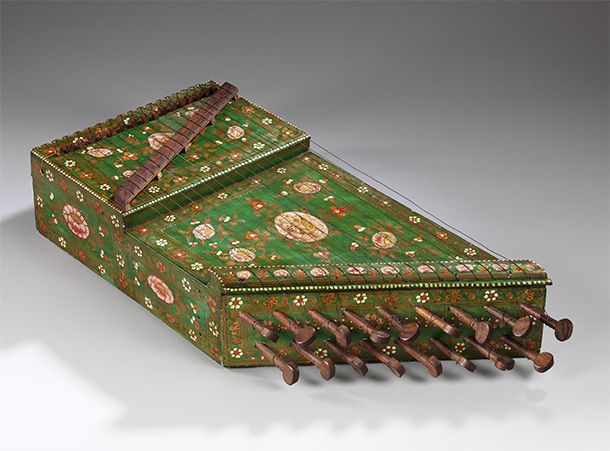 The swaramandal or surmandal resembles a kind of zither. It is related to the santoor, which is, however, closer to the hammered dulcimer.

The name swaramandal translates from Hindi as a ‘group (or circle) of notes’. Like the santoor, the swaramandal seems to have been popular in Kashmir. The musicologist C. R. Day wrote in 1891 that it was usually played by Punjabi musicians but that it was rarely heard because it was difficult to play and very expensive.

An instrument of broadly similar design to the 19th century example shown here appears in a Mughal painting of about 1600-05 in the Chester Beatty Library, Dublin. It is held flat resting on the seated musician’s legs. Today’s swaramandals, however, look somewhat different. Several of the instrument types featured in the V&A’s collection have changed in shape and other aspects of design since these examples were made. An interesting aspect of the Museum’s 19th century collection is that it records a specific point in their evolution. 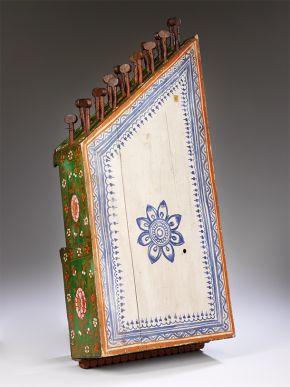 The number of strings on the swaramandal may vary but in this example there are 17. The swaramandal has to be tuned differently for each raga (musical mode) or composition. C. R. Day recorded that the swaramandal was played using two mizrabs (plectrums) of wood, glass or steel, which were worn on the fingertips of the right hand and used to pluck the strings, which could be accompanied with the little finger. The left hand was used to touch a shell or metal ring against the strings to produce musical embellishments. In the Mughal painting referred to above, the musician appears to be playing it in a similar way, plucking the strings with the fingers of his right hand while he holds a gold-coloured object shaped like a magnifying glass in his left hand. The round section of this object rests in the palm while the longer stem is held between his index finger and thumb.

The santoor, by contrast, is trapezoidal in shape, typically a little larger, and has a greater number of strings (usually between 72 and 100). It is played with lightweight hammers. Some sources state that the swaramandal could also be played using two sticks or hammers like the santoor. 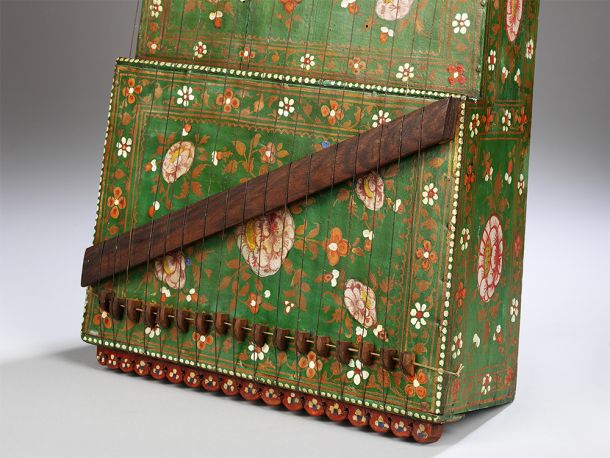 This swaramandal has painted floral decoration in a style typical of Kashmir. It was purchased in 1882 from the collection of the musicologist Carl Engel (1818-82) along with many other instruments from around the world, including India. At that time Engel was one of Europe’s leading authorities on the history and development of musical instruments and was the author of the Descriptive Catalogue of the Musical Instruments in the South Kensington Museum (1874).