Closed Exhibition - Constable: The Making of a Master

Constable: The Making of a Master – About the Exhibition

This major exhibition reassessed John Constable’s influences, techniques and legacy to offer a new interpretation of Britain’s best-loved artist. Constable’s most famous masterpieces were united with his revolutionary oil sketches: expressive evocations of land, sea and sky that allowed him to transfer the freshness of the outdoors into his exhibition paintings.

For the first time, Constable was presented alongside the old masters of classical landscape whose formal values he studiously assimilated. By combining the authority of their compositional ideas with a breathtakingly naturalistic vision that was entirely his own, Constable would ultimately transform the genre of landscape painting, and in the process shape the enduring popular image of the English countryside. 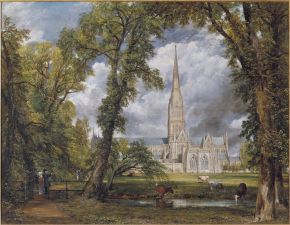 Learning from the Old Masters

John Constable first learned to paint and draw as a gentlemanly pursuit. In 1795, he met the amateur artist and collector Sir George Beaumont. It proved a turning point. Beaumont’s collection gave Constable access to major paintings by the Old Masters.

Constable’s early works reveal the influence of several great painters: Raphael, Rubens and Claude Lorrain. His contemporary John Cranch supplied him with a list of ‘Painter’s Reading’ which provided a grounding in the history and theory of art. John Thomas ‘Antiquity’ Smith lent him drawings and prints. With the encouragement of these friends, Constable entered the Royal Academy Schools in London in 1799 to embark on a career as a painter.

Recent British landscape artists such as Thomas Gainsborough, Richard Wilson and Thomas Girtin encouraged him to establish a dialogue between the Old Masters and close study of the natural world. No longer content with ‘seeking the truth at second hand’, he made ‘laborious studies from nature’ during sketching tours of the Lake District and elsewhere.

Sketching in the open air 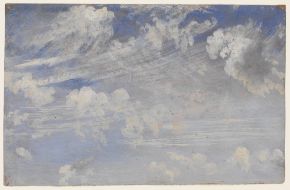 Sketching in oils spread throughout Europe during the 17th and 18th centuries. Claude Lorrain was said to have painted out of doors, and several handbooks for students of art recommended open-air sketching in oils. Thomas Jones made impressive oil sketches in Wales and Italy in 1772–82, and J.M.W. Turner, William Mulready and John Linnell all painted vivid outdoor sketches.

When working outdoors, Constable painted on fragments of canvas, millboard or home-made paper. As he explained to a friend in 1825, his oil sketches ‘were done in the lid of my box on my knees as usual’.

Constable transformed the genre of oil sketching from one used for recording landscape motifs to a means of capturing transient effects of light and weather. When his daughter Isabel gave the oil sketches remaining with the family to the South Kensington Museum (now the V&A) in 1888, they were aptly described by a reviewer in The Standard as ‘brilliant transcriptions of the thing of the moment – nature caught in the very act’.

From studies from nature to exhibition paintings

Constable’s letters mention both ‘sketches’ and ‘studies’ in oils. These approximate categories can be subdivided into distinct types. They include studies from nature of a motif (such as a portion of landscape) or of various effects of light, shade or weather. Some sketches were made in the studio as a first draft for a composition. Uniquely, Constable also made full-size studio sketches in preparation for an exhibition painting. A study made directly from nature could sometimes be revised later in the studio. Provided with a sufficient level of finish, it might be judged suitable for exhibition and sale. Constable produced a number of such paintings, usually on the modest scale of a ‘cabinet picture’. Some were made with the guidance of drawings, others executed entirely in the open air. 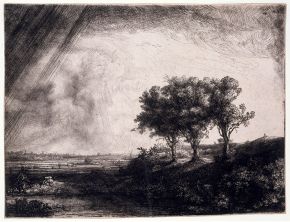 The artist’s friend and biographer C.R. Leslie recalled that ‘Constable died as he lived, surrounded by art, for the walls of the little attic [bedroom] were covered with engravings’. After he died in 1837, the paintings in his studio and his own art collection were sold at auction. Throughout his life Constable collected prints, which were less expensive and therefore of superior quality to the rather minor paintings he could afford. He was able to assemble a considerable art collection. It
included 59 oil paintings by ‘Old and Modern Masters’ and over 5000 prints, 250 drawings, 37 books of prints and 39 framed prints and drawings. Most were landscape and genre subjects, similar to those which he himself painted.

Prints by or based on favourite artists such as Rubens, Claude, Ruisdael and Titian served Constable as material for copying, providing rich sources of inspiration and teaching aids.

Making copies of other artists

Nine ‘copies by Mr Constable’ – all after 17th-century landscapes by Ruisdael, Claude, Rubens and Jacques d’Arthois – were included in the posthumous sale of his works in 1838. Copying Old Masters traditionally helped young artists develop their technique and powers of invention. It also fed the widespread demand for replicas of celebrated works. Constable’s nine copies sold well, most realising higher sums than the ‘Old and Modern Masters’ he owned, or his own sketches and studies.

Constable had access to Sir George Beaumont’s choice collection of pictures, and was later able to copy Old Masters on display at the British Institution and Royal Academy Painting School. The span of his artistic life was bounded by his copies of two utterly canonical works: the Raphael tapestry cartoons, which he copied in 1795 from Nicolas Dorigny’s engravings, and Titian’s altarpiece The Death of St Peter Martyr, which Constable hailed in 1836 as ‘the foundation of all the styles of landscape in every school of Europe’. 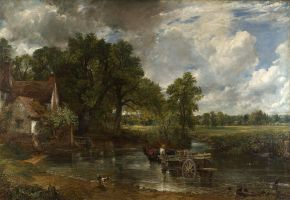 Constable advised artists to maintain ‘a close and continual observance of nature’, but translating faithful observation into a finished composition was an ongoing challenge. Many of Constable’s exhibition paintings were the result of a complex process of development, sometimes spanning a number of years. They were composed from a wide range of oil sketches, graphite drawings, watercolour studies and earlier paintings.

Following his marriage in October 1816, and faced with the financial pressures of a growing family, the commercial success of his paintings became increasingly important. For Constable’s six large scenes of the River Stour, including The Hay Wain (1821) and The Leaping Horse (1825), he adopted the painstaking process of making full-size preparatory oil sketches. They helped him to co-ordinate motifs and balance colour, light and shade, solving compositional problems
while retaining the freshness of his smaller drawings and oil sketches. These six-foot canvases were some of Constable’s greatest successes, when exhibited at the Royal Academy between 1819 and 1825. 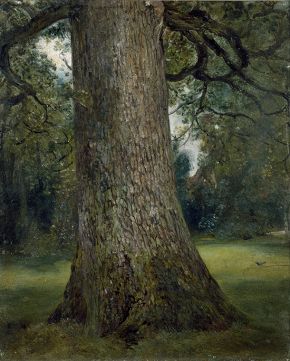 Study of the Trunk of an Elm Tree, John Constable, about 1824, oil on paper. © Victoria and Albert Museum, London

Sir Joshua Reynolds had encouraged students at the Royal Academy when copying to consider themselves in competition with their esteemed predecessors. By the early 19th century opportunities for British artists to study major paintings by the Old Masters increased with the growing popularity of art exhibitions and the founding of public picture galleries.

After his death, Constable was considered as ‘wholly emancipated from the schools of Dutch, French, or Italian art’. In his own time, however, art critics had favourably likened his pictures to those of 17th century masters such as Hobbema, Rubens, Ruisdael and Wouwerman.

Though later overlooked, such comparisons were well founded. Whether using the motif of a cart crossing a ford (a common subject in 17th-century Dutch and Flemish pictures), vibrant brushwork suggestive of Renaissance Venetian artists, or configurations learned from French painters of classical landscape, Constable continued to reference the Old Masters throughout his career.

A legacy in print

Constable knew the importance of engravings in promoting the fame of painters. He also hoped that publishing reproductions of his work would be profitable. In 1824, the engraver Samuel William Reynolds proposed to make a print, at his own expense, of Constable’s The Lock which had been well received at the Royal Academy. The venture failed and relations between the two men soured. Five years later Constable engaged David Lucas to produce prints of his pictures. Mezzotint engraving was chosen as the technique best able to capture the effects of light and shade, or chiaroscuro, so characteristic of Constable’s paintings. To display his full creative range, he selected small oil sketches
and larger exhibition pictures, as well as painting new subjects.

The first group of prints was published as English Landscape Scenery in 1830. Explanatory texts were later written to accompany individual plates, but the project had little commercial success.

Supported by the Friends of the V&A

With thanks to Winsor & Newton