London Design Festival at the V&A 2012 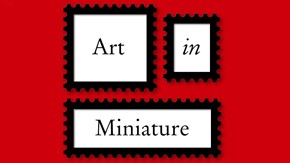 A London-wide celebration of the miniature art of Royal Mail stamp design. Follow a trail of mini-masterpieces through special locations across the city. Curated by Hat-trick design. 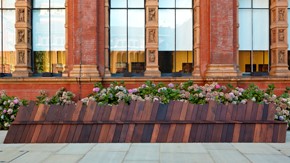 The London Design Festival collaborated with the British furniture and lighting producer Established & Sons to create a series of one-off benches, each made from a different material. Leading designers including Jasper Morrison, Konstantin Grcic, Barber Osgerby, AL_A and Luca Nichetto worked with individual material suppliers to design a bench that exploits and accentuates the material's inherent attributes. The resulting family of benches were exhibited collectively within the environs of the Museum’s John Madejski Garden. 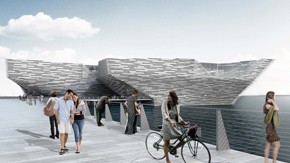 V&A at Dundee, a new international centre of design for Scotland designed by the Japanese architect Kengo Kuma, to be built at the heart of Dundee's waterfront

Designing for the Future

V&A at Dundee will be an international centre of design for Scotland, housed in a remarkable building by the Japanese architect Kengo Kuma and situated at the heart of Dundee's developing waterfront.

Alongside proposals and models for this exciting new museum, visitors could see design work by recent graduates from Scotland’s four renowned art schools, which showed how inspired design can be life-enhancing and enable social change. 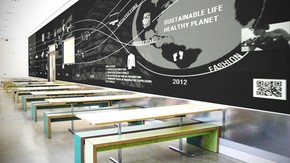 Evolutionary Wall – a retrospective look at the art of sustainable design on a 20 metre wall!

A look at where it all began and how sustainable design has come into its own over time. Although eco design feels like today’s revolution it actually has some interesting precedents. As design filters into every aspect of our life we took a look back to the Great Exhibition that charged design with momentum and British spirit propelling design to what it is today. Transportation, Fashion, Graphic Design, Architecture, Product Design and much more were charted chronologically on a mural along the Lunchroom wall of the Sackler Centre on view during the entire festival! 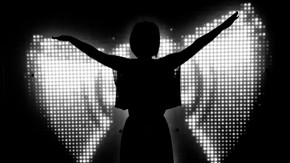 by Dominic Harris and Cinimod Studio

Ice Angel was an interactive artwork that gave each participant a glimpse of him or herself in angelic form. The work was inspired by the way children create snow angels in fresh snow. It responded to the user’s arm movements to create a unique pair of digital angel wings. The wings were created dynamically and were linked to the physical proportions of the individual participant. The artwork also had a ‘memory’: if a user returned after a day, a month or a year, the device would remember them and recreate their own unique angel wings for them again.

Ice Angel was experienced through the participation of the viewer who adopted the role of a performer. Through this curious role reversal the viewer became the subject of a living portrait, with their hidden ‘angel’ revealed for all to see. 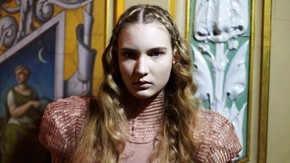 Juliana Sisssons was V&A Fashion Design Resident between July – December 2010. Sissons developed a fascination with historic armour and its links with contemporary fashion, developing knitwear directly influenced by the V&A's collection. This display presented pieces from that knitwear collection alongside the armour that captivated Sisson’s during her residency. 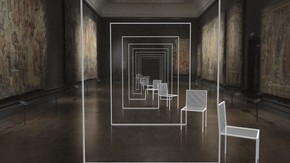 Throughout the Museum, starting in the Grand Entrance

Nendo’s Mimicry Chairs comprised a series of elegant chair installations appearing in varying locations throughout the Museum. Japanese design studio Nendo has created a simple chair archetype made from pressed and punched metal painted white giving it an almost ghost-like appearance. These chairs were placed within the Grand Entrance and further locations throughout the Museum including galleries, staircases and corridors. At each site, the chair was modified to mimic the space it inhabited and the objects around it 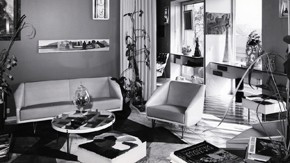 The work of Gio Ponti, maestro of Novecento design, came to the V&A in an installation for the public to see and use. Molteni&C’s collection of Ponti pieces were curated in an exhibition that showed us the design master’s process, and drew us into his world. 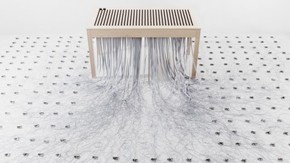 504 monophonic musical boxes wired up to one table with switches that regulate rotational speed and sound volume to produce random sound effects responding to the movements of visitors. 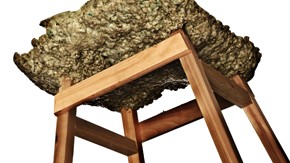 Out of the Woods, by RCA and AHEC

Out of the Woods: Adventures of 12 Hardwood Chairs

Fresh minds design with an age-old material – a collaboration between the Royal College of Art and the American Hardwood Export Council that explored the creative and environmental potential of this naturally renewable material and relates it to the world of production. 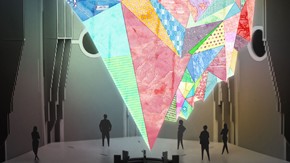 Prism presented an alternative view of London, exposing intangible data flows in the capital. It was a lens into a second city, one that is made from infrastructural data feeds and exchanges.

Prism drew from a multitude of live data sources, including transport updates, traffic webcams and environmental data, and presents them in real time as a living patchwork of systems and processes. As machine languages and processes start to permeate the city, we must re-examine our urban landscape as a new and unexplored terrain. The installation was an investigation into the virtual life of the city, and our own often ambiguous relationship with the data that controls our lives. 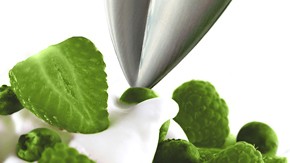 Sweet Instruments of Desire demonstrated how creativity and innovation can impact the sensory experience of dining. 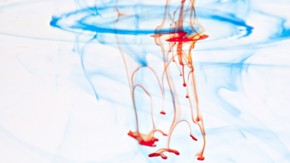 The Journey of a Drop by Rolf Sachs

The Journey of a Drop

Rolf Sachs created a stunning site specific installation for the V&A’s magnificent Henry Cole Staircase, treating spectators to a performance of choreographed ink drops. Journeying through the staircase’s great height, the drops fell to create organic 'colour clouds' – explosions of delicate and unique beauty – at the end of their descent. 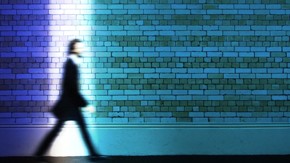 Walk the Light by Cinimod Studio

A stunning interactive lighting design installation by Cinimod Studio. Walk the Light allowed the visitor control how the light fell simply by how they moved through the V&A’s tunnel entrance. Using a combination of technologies including thermal camera tracking and Philips LED lighting, Walk the Light demonstrated lighting design’s increasing sophistication, playfully and beautifully transforming our experience of arrival at the Museum.