London Design Festival at the V&A 2015

About the London Design Festival 2015

This year the Festival will again celebrate and promote London as the design capital of the world, creating a platform for inspirational design initiatives. Over 350 events and installations will be on offer across the city, from a stimulating programme at the Victoria and Albert Museum to a series of installations and exhibitions in Somerset House. The Festival will showcase ideas from more than 250 partners, representing the heart of London’s design community, proving its role as a leading force in the city’s creative economy.

As the Festival Hub, the V&A will house a broad range of specially-commissioned installations and displays around the Museum by some of the world’s most exciting designers, as well as a huge programme of events including talks, tours and workshops.

'The London Design Festival is a vibrant think tank, which annually presents some of the most interesting contemporary work being created in the world.'
Dr Martin Roth, Director of the V&A

Some of the Festival highlights this year include:

The Mexican Pavilion: ‘You Know You Cannot See Yourself So Well as by Reflection’ by Frida Escobedo. This special project for the John Madejski Garden was commissioned by the V&A and the London Design Festival, with support from the government of Mexico, to celebrate the Year of Mexico in the United Kingdom.

The Ogham Wall by Grafton Architects

‘The Ogham Wall’ is an installation by Stirling Prize nominee Grafton Architects, created in collaboration with Irish Design 2015. Inspired by the Irish Ogham alphabet, dating from the 4th century AD, the installation will translate this ancient language into an architectural construct of three metre high cast concrete ‘fins’ standing in the space of the Tapestry Gallery (Room 94). Visitors are invited to move within the spaces formed by the new structures, and to enjoy the varied rhythm and angles of the elements, and the experience of light and shade created in the gallery. 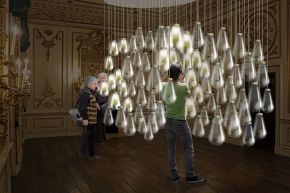 ‘Curiosity Cloud’ is an installation by acclaimed Austrian design team mischer’traxler for Champagne Perrier-Jouët. The installation will transform the beautiful space of the V&A’s Norfolk House Music Room (British Galleries, Room 52b), in an exploration of the transience of nature and the Art Nouveau movement.

‘Mise-en-abyme’ is a colourful installation for Gallery 112, the bridge over the Medieval and Renaissance galleries. Created by designers Matteo Fogale and Laetitia De Allegri, working with Johnson Tiles, the installation will play with the viewer’s sense of perspective, creating a landscape of shapes and overlapping semi-transparent colours. 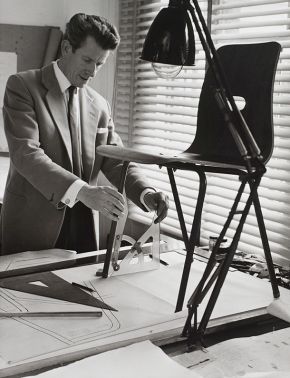 The British Galleries Landing (Level 4) will be home to a display inspired by Robin Day, one of the most significant British furniture designers of the 20th century. To celebrate the centenary of Day’s birth, design and architecture collective Assemble will create an installation responding to Day’s passionate interest in wood, which will be shown alongside original furniture designs, archival photos and tools. The display will be supported by Robin and Lucienne Day Foundation.

Alongside other installations and displays throughout the Museum, Festival visitors will also be able to visit the pop-up London Design Festival Shop in the Grand Entrance. Offering a curated selection of design-related products alongside Festival merchandise, this exciting shopping environment will be a unique opportunity for visitors to enjoy the work of designers in a new way and take away a small part of the London Design Festival. The stand-alone shop will be designed by London-based design studio Loris&Livia, and constructed out of DuPont™ Corian®. 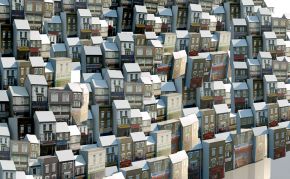 Artist's impression of a section of the tower, (c) Barnaby Barford

‘The Tower of Babel’ will be an imposing six-metre high installation by artist Barnaby Barford, situated in the Medieval and Renaissance Galleries (Room 50a). The tower itself is comprised of 3000 bone china façades, each depicting a different London shop photographed by the artist. At its base the shops are derelict, while at its pinnacle are London’s exclusive boutiques and galleries. Explicitly blurring the boundaries of art and commerce, each shop in the Tower will be for sale during its exhibition, via the V&A Shop.

In addition to installations and displays, there will be a broad programme of lunchtime lectures, gallery talks, hands-on workshops and provocative debates taking place throughout the Festival.

Each day of the Festival is themed, helping visitors and participants to make the most of their time and interests during the Festival. This year, the themes are:

There will be regular, free tours of the installations and displays within the Museum.

On Friday 25 September the Museum will remain open until 10pm, with special activities including music, talks and tours.