Stained and painted glass from the Chapel of the Holy Blood, Bruges

The figurative and armorial stained glass panels from the Chapel of the Holy Blood, Bruges are a prominent feature of the new Medieval & Renaissance Galleries. Their original home is a double chapel, the ground floor of which is in the Romanesque style while the first floor, the Chapel of the Holy Blood, is of Gothic design. It is called the Holy Blood because of the relic it houses, a rock crystal vial said to contain cloth used by Joseph of Arimathea to wipe blood from the body of Christ. The stained glass was removed from Bruges in 1795 and sold to a local man, who then sold them to an English dealer in the early nineteenth century. Some of the panels were later installed in Kilburn Grange, a private house in north west London. The panels were acquired by the V&A in 1918.

Despite being extensively restored, the panels are of great interest for their depiction of the ruling class in the late fifteenth century. The four figurative panels depict Maximilian the first (later Holy Roman Emperor) as Archduke of Austria, and his wife Mary of Burgundy, their son Philip the Fair (Figure 1) and his wife Joanna of Aragon and Castile, daughter of Ferdinand and Isabella of Spain. She later became known as Joanna the Mad for refusing to bury her beloved husband after his death; she could not bear to be parted from him and carried his body wherever she went. These almost life-sized figures are even more interesting because they are not biblical. During the period when the panels were made it would have been much more usual to depict saints, prophets and other characters from the Old and New Testament, particularly when shown on this scale. 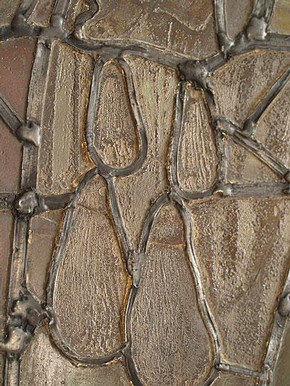 Prior to their arrival at the V&A the panels had been subject to extensive restoration, with repairs and additions being carried out at various times during their history. In the nineteenth century, the top of each figurative panel was replaced with identical architectural backgrounds which include leads deliberately added to look like repair leads. This work may have been carried out by, or at the request of, the dealer to make them easier to exhibit, more saleable or to enable them to be installed in another architectural setting. In each panel it is possible to identify different phases of restoration as the later additions of glass are of variable quality with different painting styles and paint colours. Some of the older glass is heavily corroded on the front and back, resulting in a thinning of the glass. The corrosion pits eventually connect resulting in weakening and breaking of the glass along these lines (Figure 2 and 3). Deep pits make the process of bonding and infilling difficult as it is undesirable for the pits to become filled with resin. It is therefore necessary to devise ways of protecting the glass to avoid the flooding of these pits while still achieving flat infills and bonds. In order to explore all the options for dealing with the deeply pitted glass, a visit was made to the York Glaziers Trust to study their newly-developed methods for bonding and filling highly corroded glass from York Minster. The visit enabled us to adapt our own methods to deal more effectively and efficiently with the Holy Blood panels. 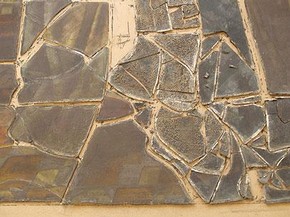 There are many considerations to be made before beginning conservation. These relate to saving, where possible, early or original leads, removing as many of the old repair leads as possible to make the panel more pleasing and easier to read, and repairing any glass breaks. The work must result in an improvement to the overall appearance of the panel while maintaining the ethics of minimal intervention.  When such extensive work has already been carried out these can be difficult judgements, particularly in relation to the leading of panels. It is likely that panels of this period will have been re-leaded many times and the original glazier's intention will have been lost. Many people who work on stained glass see lead as being used merely to provide structure and strength. Therefore, they use mainly 6mm lead throughout to expose as much of the glass as possible. There is of course merit in this; however, the use of varying widths of lead can also add strength to the design as well as to the structure of panels. Many late nineteenth-and twentieth-century stained glass artists used lead as an integral part of their designs as well as to hold the glass together. One such person was the prolific post-war German stained glass artist, Johannes Schrieter, who liberated lead from a purely functional role to create what became known as 'wandering lines' of lead; these are decorative lead lines that do not have any structural function. The Holy Blood figures required more definition to enable them to stand out clearly from their backgrounds. During conservation the decision was taken, where possible, to vary the width of the internal leads, particularly around the figures so that they would be more defined and easier to read (see Figure 1).

The many replacement pieces of glass, with their varying quality, not only of production but also of interpretation of the design, have resulted in some strange and quirky visual qualities (note the wasp waist of Philip the Fair). Occasionally the removal of old repair leads can emphasise these misinterpretations, making them even more obvious and confusing to the viewer's eye. Some of the Holy Blood armorial panels suffer from this problem and as a consequence we took the decision not to remove all repair leads. The armorial panels also contain some much older leads and these too have been left alone where possible. Despite interference by well-meaning conservators and restorers over their lifetime, these panels remain intriguing, attractive and unusual examples of the art and craft of stained glass from the Renaissance period and deserve to have pride of place in the new galleries.

The display of stained glass panels from the Chapel of the Holy Blood, in the Medieval & Renaissance Galleries, has been generously supported by Sam Fogg.