All that Glitters: Conservation of a Gilt Leather Chasuble 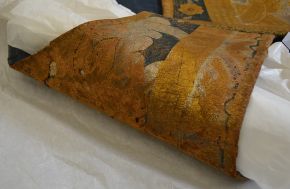 One of the items of costume selected for display in the upcoming Europe 1600-1800 Galleries is a gilt leather chasuble (476-1882), dated to the second half of the seventeenth century. Its origin is thought to be Italian or German, and this chasuble forms part of a set, including stole (476a-1882) and maniple (476b-1882).

The vegetable-tanned leather, presumed bovine, has been embossed from the flesh side (verso), with a design of orphery, fruits and flowers. Pattern has been stamped onto the grain side (recto) with a variety of small motifs. The leather is decorated with silver leaf, blue paint, and yellow varnish –giving a gold appearance. A blue linen lining conceals internal paper and linen linings.

The chasuble required a complex conservation treatment to make it suitable for display. The leather was soiled, with extensive insect damage including surface grazing, holes at the shoulders and around the edges (Figure 1). The holes were both visual distractions and structural weaknesses and the edges needed to be whole for re-stitching the lining. The shoulders were heavily worn, with loss of the grain surface and required strengthening to bear the weight of the chasuble when mounted upright. The strategy for a two-stage repair to the leather began with individual patches, followed by a partial lining.

Due to restricted access and the presence of original paper and textile linings, the application of dry adhesive films that could be reactivated in situ, was considered the most appropriate treatment for the chasuble. A method was, therefore, developed for creating large Lascaux™ substrate-free adhesive films, expanding the scale of Karen Thompson’s work.1

It was necessary to open original seams for access, the blue outer lining and inner linen lining having been stitched separately to the leather. Holes in the leather were patch-repaired using 75gsm Reemay® (a random spun-bonded polyester) painted with acrylics to match the brown base-colour of the leather, without attempting to re-instate pattern or design. For strong and flexible adhesion, Beva® 371 pre-cast film was used. The shape of the holes could be cut out of the film with a scalpel blade, the adhesive partially re-activated onto the Reemay in order to remove its polythene backing. The patch could then be inserted into the chasuble, and fully re-activated from behind, using a spatula iron at 70°C through a barrier of silicon-release paper. In this manner all holes, tears, and damaged edges were conserved.

Upon opening the seams, the paper lining was found to be in a poor condition, heavily creased and split. Simple repairs were necessary to facilitate further handling. A medium- weight Japanese sekishu paper was tinted with watercolour paint, and small tabs adhered with starch paste were used to hold the tears together.

The shoulders of the chasuble were weakened from insect damage and wear. Although the individual holes had been patch repaired, a support lining was necessary to provide overall support and allow the chasuble to be displayed upright. A lightweight (19gsm) Reemay was selected as the support material, being strong and flexible without adding bulk. The Reemay was painted to match the leather, using acrylics and hung up to dry to prevent any pooling of paint on the surface. The pre-cast Beva film was not suitable, immediately soaking through the Reemay when heat was applied. 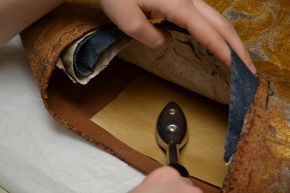 An alternative adhesive was sought, which could be cast as a film, introduced to the leather dry, and re-activated in situ. A literature review showed that Lascaux 360/498HV is a suitable adhesive for leather repairs, however for large scale use it is applied in its liquid form. Experiments were required in order to produce a substrate-free film large enough to treat the chasuble. A ratio of 1 part 360HV to 3 parts 498HV was used, giving the film strength and flexibility. The film was cast on polythene, stretched taut on a flat surface. For small free-films, masking tape can be used to create a template, with the adhesive spread using a glass rod, or smooth edge of a ruler.1 This method is restricted by the length of the spreader, and was not suitable for creating a large free-film, a size of 75cm x 35cm being required. Brushed onto the polythene neat, deep brush marks are left in the adhesive as it dries, creating an uneven film, an effect which is exacerbated as the film is built up in successive layers. After various trials, a smooth and even film was achieved using the Lascaux 1:3 360:498, as a 75% w/v solution in 3:1 IMS:water. The film was built up in 6 layers, brushed on in alternate directions, with each layer allowed to dry before the next was added. 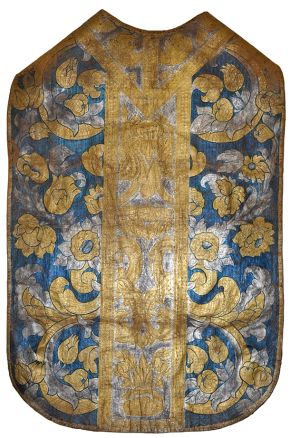 Tests were carried out to find the best method of adhering the Reemay support to leather with the Lascaux film. Solvent reactivation with IMS or acetone vapour applied through a semi-permeable membrane resulted in a very weak bond. When re-activated with heat, using a spatula iron through silicone release paper barrier, the bond was strong, and almost instant. This was an important quality - that it could be re-activated at a lower temperature and in a quicker time than the Beva film, avoiding the possibility of the Beva film re-softening.

A template for the lining was made, and cut out of the painted Reemay. The adhesive film was laid face down onto the Reemay, and partially re-activated using the spatula iron at 65°C. This allowed the polythene to be carefully peeled away. The lining was trimmed to fit within the hem of the leather, to avoid adding unnecessary bulk. The edge across the back, and short edges at the shoulders were trimmed with pinking shears to soften the edge of the patch. The adhesive remained tacky, so was temporarily covered with small pieces of silicone release paper while it was maneuvered inside the chasuble. The silicone release paper could be removed, and finger pressure used to tack the Reemay lining in place. Working from the centre back, upwards and outwards over the shoulders the adhesive was fully re-activated using a spatula iron set at 65°C through a barrier of silicone release paper, and the lining set in place (Figure 2). The seams were re-stitched using Gutermann’s Mara 70 polyester thread, using only existing stitch holes in the leather. The chasuble is now fully supported and safe for display in the new Europe 1600-1800 Galleries, opening early 2015 (Figure 3).

Thank you to Susan Catcher, V&A Paper Conservator, for her guidance on repairing the