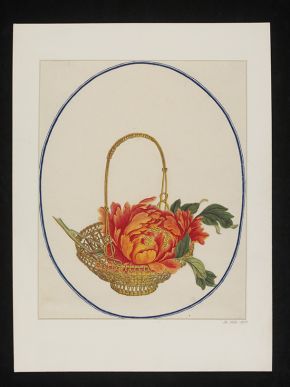 During the past year, the V&A Science Section has collaborated with Nottingham Trent University (NTU) and the Royal Horticultural Society (RHS) in an AHRC/EPSRC funded project to identify pigments in the V&A Chinese export pictures and the RHS Reeves Chinese botanical watercolours. The collections both date from the nineteenth century. The V&A pictures have little or no provenance, and no painters’ or original collectors’ names or dates. The RHS pictures were commissioned and collected by John Reeves (1774- 1856), a Canton tea inspector, and are accurately dated to between 1817 and 1831.

Dr Haida Liang (NTU) and Dr Lucia Burgio (V&A) undertook the analysis of 40 pictures from both collections, using non-invasive methods, to identify pigments, points of similarity and difference between the two collections, and whether there were any ‘hidden’ features. The results have been surprising. For the purposes of this article, two particularly instructive pictures will be discussed; ‘Basket’ from the V&A and ‘Camellias’ from the Reeves collection (Figure 1 and Figure 2).

Until relatively recently, traditional pigment analysis was carried out either by polarized light microscopy or by chemical tests, both of which involve lifting minute samples from the object under observation. This is an intrusive and destructive approach and conservators are understandably reluctant to allow objects as fragile as watercolours to be subjected to this process unless there are exceptional reasons for doing so. 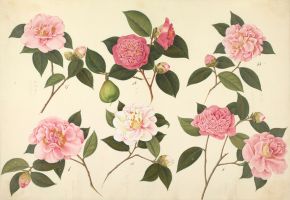 This project set out to identify pigments using non-contact and non-destructive means. The first method, multispectral imaging, photographs the picture as a whole or in large parts in different sections of the visible to near infrared spectrum using various spectral filters to produce the reflectance spectra of the artists’ materials under examination. This in turn indicates which organic or inorganic pigments may be present. Infrared light is also particularly useful in detecting unsuspected under-drawing (see Figure 3, showing a portion of ‘Camellias’ as imaged by AL). High contrast microscopic resolution images of the drawings were obtained with Optical Coherence Tomography (OCT), a new near infrared 3D volume imaging technique normally used in ophthalmology.

Three further methods were used to interrogate minute areas of the watercolours. Microfade involves the application of a very narrow beam of light onto selected parts of a picture to assess the rate of fading. The results are compared with known rates of fading for the Blue Wool Standard. This technique provides valuable information as to optimum light exposure for display purposes. In addition, the initial spectral reflectance collected by the instrument has higher spectral resolution than those collected by multispectral imaging and can therefore be used for identification of pigments such as red lakes and cobalt pigments with more certainty.

Raman microscopy is used to identify inorganic pigments such as malachite and vermilion, two colours favoured by Chinese artists, as well as some organic dyes, such as indigo and gamboge. In essence, a laser beam is directed through a microscope onto a single pigment particle on the picture and a ‘fingerprint’ is generated for almost every material. This method has two limitations. With the equipment currently available at the V&A it is physically impossible to place the middle of a large picture under the beam due to the way in which the microscope is constructed, and secondly, Raman cannot easily get a fingerprint for many traditional organic dyes.

X-ray fluorescence (XRF) analyses minute areas (~0.2 mm across) detecting and identifying most chemical elements. A graph is produced which shows a series of peaks, each one representing a separate chemical element. For example, a graph showing the predominance of iron on a blue area of the picture will suggest the presence of Prussian blue as opposed to indigo, azurite or cobalt blue. 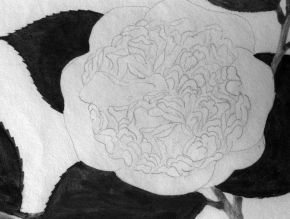 As expected, there were commonalities in the use of pigments between the two collections. These include malachite, azurite, vermilion, lead white, red lead and indigo. Most of the V&A pictures were drawn with amorphous carbon black, whereas graphite was used on the RHS pictures. Infra -red examination revealed extensive under-drawing in pencil on the Camellia picture (Figure 3), and also on other pictures of chrysanthemums but was not used on the less ‘showy’ specimens. This may indicate that a particular painter used a western pencil and that his work could be separately identified. The detection of chrome yellow was an equally unexpected find on the Camellias picture, thought to date from c.1818-24. Chrome yellow was not produced commercially until 1814-16 1, which suggests that Reeves purchased the new pigment shortly before he left for China in 1817, or that it was available in Canton. Whatever the origin, this may be the earliest dated instance of chrome yellow being used in China.

There is evidence of two different types of whites on ‘Basket’. The identification of lead white by Raman microscopy was fully expected as this tended to be the white of choice in most nineteenth-century Chinese export watercolours. However, XRF also detected both barium and zinc; in this case these are likely to derive from the presence of lithopone, a white pigment developed in the 1870s and consisting of a mixture of barium sulfate and zinc sulphide.1 There is no known date for the presence of lithopone in China, but its appearance on only this picture, which has a late accession date (1907), suggests that it might prove useful in dating Chinese export pictures.

This research developed from an approach previously adopted by the NTU group for paintings at the Mogao caves in Dunhuang, where this suite of instruments were used together for the first time

In both cases, cross referencing the results from several instruments yielded significant and unpredicted pigment identifications. The presence or predominance of certain pigments in the V&A collection may enable the identification of particular painters’ workshops and accurate dating. It may also be possible to detect changes in the use of certain colours in the Reeves paintings over the collection period and to link specific pictures with particular artists.

The discovery of these two western pigments suggests a greater trade in painters’ materials than had previously been appreciated. This indicates a need for further research.

We are grateful to Hongxing Zhang, V&A Senior Curator of Chinese Collections, for his assistance in accessing the V&A watercolours; and to funding from the Arts and Humanities Research Council (AHRC) and Engineering and Physical Science Research Council (EPSRC) Science and Heritage Programme Research Development Award AH/K006339/1.