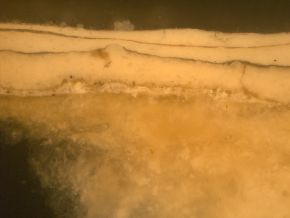 The aim of this article is to bring together and share preliminary analytical results from the V&A Science and student research papers, working observations and studio tests carried out over the last four years on the V&A’s plaster cast collection. It will focus primarily on the surface of the casts and document what is currently known to us of the surface coatings from these various contributory sources. As part of the Museum’s project to refurbish its two Cast Courts, 109 plaster casts have been conserved. The first phase will be complete on 29 November 2014, with the re-opening of the Weston Cast Court (Gallery 46b). The current condition of the plaster casts documents their comparatively short history. The casts present a complexity of interventions, whether from the original moulding and casting process, from their functional nature as teaching reference aids, or from the multiple installations in the changing gallery spaces of the Museum.

Of the 109 casts treated in Phase 1 of the project, 27 presented coherent paint layers. These include ‘bronzed’ metal effects, polychromed schemes or ‘grey’ paint layers. Seventy-five of the casts present surfaces with a coating that is either yellow in colour or pale off-white with a variable degree of polish and translucency. The remaining casts appear to have no discernible coating. These are generally casts which have been displayed under glass. There are two historical texts which are helpful sources for indicating likely surface treatments for plaster casts: Frank F. Frederick’s ‘Plaster casts and how they are made’ (New York: William T. Cornstock, 1899) and Victor Wager’s ‘Plaster of Paris casting for the student sculptor’ (London: John Tiranti Ltd, 1944). Frederick recommended a light yellow or buff as the most satisfactory ‘restful tint’ for plaster, produced by using linseed oil (Frederick 1899:108). ‘The oil serves a three-fold purpose - it tints the plaster; it renders the plaster impervious to water and therefore washable; it hardens the plaster and makes it durable’ (Frederick 1899:110). Wager suggested ‘The first and essential step towards colouring is the closing of the pores of the plaster’. For this he recommended the use of white shellac dissolved in IMS. He also suggested the use of Dextrine, size, animal glue, bees wax and glycerine (Wager 1944:87 and 88).

Samples were taken from several of the casts presenting defined paint layers. The samples were analysed by V&A Science and/or students using optical microscopy with and without UV light. Many of the samples showed a clear stratigraphy identifying up to seven layers in the structure. The presence of animal glue, shellac and a natural resin were indicated in various samples and the presence of pigments, particularly yellow ochre, were indicated on the uppermost surfaces of several of the samples. This was thought to be applied as a diluted toning wash (Repro.1857-161). The presence of a thin, beige or brown layer over the sealed plaster, thought to be iron oxides, was found beneath several other paint layers.

Complimentary analytical techniques were used for several of the samples: 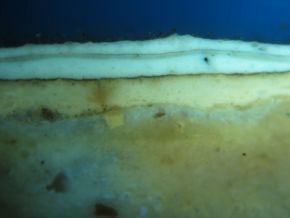 Of the 75 casts presenting surfaces with an indeterminate coating, sometimes incoherent and variable in thickness but generally with an appearance of an altered surface, samples were taken from eight. Optical microscopy with and without UV light was carried out for a few of the samples; the results suggested surfaces to be treated with a yellow-orange stain or a thick surface stain and some toning pigment or dirt (Repro.1916-3881 and Repro.1916-3065 respectively).

FTIR spectroscopy indicated wax and alum on the surfaces of casts Repro.1865-52 and Repro.1869-68 and seedlac additionally on the later. Residue from a cleaning swab used on the surface of Repro.1865-52 indicated yellow ochre. FTIR spectroscopy also confirmed residues found on the above casts in the deeper recesses and air pockets to be gelatine, which corroborates with the type of moulds likely to have been used for the casting process.

Further and more comprehensive study and analysis is required. The use of spectroscopy (SEM-EDX, FTIR including ATR, FT-Raman with infrared source, ICP-MS), gas chromatography mass spectrometry (GC-MS) and secondary ion mass spectrometry (SIMS) would be helpful. Prepared plaster samples of various historic coatings have been a useful source for comparative reference when using UV-vis and FTIR spectroscopy and a more comprehensive set of samples are being prepared and aged to aid further comparative analysis of the surface coatings.

I am grateful to the following students who all added detail and sustained enquiry to the project: Christian Kile, Maxwell Malden, Ian Nurock, Ben Jones, Ana Catarina da Silva Ramalho, Carolein Coon and Chloe Stewart from The City and Guilds of London Art School, and Rosemary Jeffries and Emma Payne from University College of London. Thanks to Dr Lucia Burgio and Dr Brenda Keneghan from V&A Science; also to Sergio Merida and Soraya Alcala for their commitment as contractor and volunteer respectively.