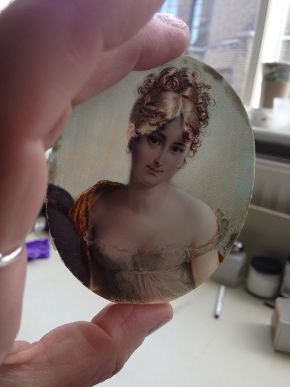 The V&A holds the National Collection of Portrait Miniatures, comprising over 2000 items. Due to the size and significance of the collection, the V&A has long recognised the importance of having an in-house specialist in the field of portrait miniature conservation. From the 1960s, the late Jim Murrell was responsible for conserving the collection and went on to publish extensively on the subject. In view of Jim’s imminent retirement, Alan Derbyshire began training with Jim in 1988. This training was further consolidated when Alan was seconded to work on the miniature collection at the Louvre Museum in 1990/91. When Jim retired in 1994 Alan took over responsibility for the conservation of the V&A’s portrait miniatures and now, more recently, the initiative to maintain this specialism within a national museum has been enabled by the generosity of the Clothworkers’ Foundation.

The Clothworkers’ Foundation is the charitable arm of The Clothworkers’ Company, from which it receives its income. Since its formation in 1528, the Clothworkers’ Company has supported its members in times of need and as it grew wealthier, has been able to help non-members. The Foundation has funded many textile projects over the years, but its Conservation initiative covers a broader range of disciplines with its aim to ‘strengthen the profession, which continues to face significant challenges including the decline in specialist conservation skills, and the closure of conservation courses.1

Resourcing issues at national museums have made succession planning for such specialist conservation skills much more problematic to ensure and maintain. However, thanks to the generous funding for training in the arts and humanities field by the Clothworkers’ Foundation, a succession training programme for the conservation of portrait miniatures has been underway at the V&A since June 2013. The funding covers a backfill for Alan so that we can employ a recently-trained paper conservator, who is in need of further development and experience, on a contract basis. Such a programme was initially discussed between the Clothworkers’ Foundation and the National Portrait Gallery (which also has an extensive miniatures collection but no in-house conservator) in order to assess the possibility of funding the training of someone, perhaps from the private sector. However, with the discussion broadened to include the V&A and Alan’s obvious expertise in the field, it was decided that the knowledge and skills should continue to reside in a national museum, with an understanding that these skills would be continued to be passed on in the future. With this in mind a proposal was put to the Clothworkers’ Foundation by the V&A for funding to proceed with in-house training of Senior Paper Conservator, Victoria Button. The successful proposal has funded the training for one day per week over a two-year period and provided the opportunity for a recent graduate to work within the Section, as a backfill for Alan’s time. A small proportion of the funding will also cover the purchase of specialist tools and travel to a relevant conference or to view other miniature collections.

The knowledge required to conserve portrait miniatures is complex due to the variety of materials involved. Portrait miniatures were painted in watercolour on vellum stuck to card (during the sixteenth and seventeenth centuries) and watercolour on ivory (from the beginning of the eighteenth century). These small delicate miniature paintings are normally sealed in contemporary lockets and frames, which themselves can be challenging to open and conserve and involve other materials such as metal, glass, ivory and wood. For these reasons it was appropriate to choose an established conservator who already had good experience so that the additional skills could be more readily acquired. Since most miniatures are watercolour based and the early miniatures are on vellum stuck to card, it was also appropriate to choose a paper conservator because of the overlap of knowledge of materials and techniques and conservation practices.

Victoria Button started her weekly training with Alan Derbyshire as planned at the beginning of June 2013. Victoria will also be spending some time in glass and metals conservation studios in order to gain an understanding of current conservation practice with regard to the treatment of the lockets. During the first year, she has been introduced to the relevant literature on the subject and has assessed and worked on a number of miniatures. This has allowed Victoria to begin to familiarise herself with the materials and techniques of miniature painting, recognition and assessment of conservation problems and consideration and practice of various treatment options. In addition, more specifically, she has worked under Alan’s supervision on new acquisitions, including a sixteenth-century miniature by Hornebolte, an eighteenth-century miniature by Rosalba Carriera and an unusually large nineteeth-century Andrew Roberstson miniature. These miniatures are all now on display in the V&A’s European Portrait Miniatures Gallery. Each miniature has a bespoke magnetised mount and a visitor-operated lighting system within the case. Victoria has been involved in these re-displays in order to gain knowledge of how the gallery functions.

Victoria has also conserved and written condition statements on several miniatures for various loans. This includes assisting with the installation of an important exhibition of miniatures by Samuel Cooper at the Philip Mould Gallery in London, which included several miniatures from the V&A. More unusual activities have included helping prepare material for an interview between Alan Derbyshire and Dr James Fox that was broadcast early this year on BBC2 concerning the Tudor miniaturist, Nicholas Hilliard, as a British renaissance painter. The training is going smoothly and according to schedule. The V&A is extremely grateful to the Clothworkers’ Foundation for making this succession training possible.