The Meissen Fountain: re-presenting porcelain on a grand scale 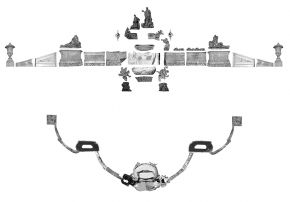 An impressive eighteenth-century porcelain fountain (246:1-1870) - the largest single Meissen porcelain figure group in existence - will take up a four-metre-wide space in the new Europe 1600-1800 Galleries (Figure 1). It was originally displayed during the state dinners of Count von Brűhl, Prime Minister of Saxony and director of the Meissen factory, and its design was based on a fountain in his Dresden summer palace grounds. In 1870, the Victoria and Albert Museum acquired over 150 pieces of Meissen porcelain, which included parts that make up the table-fountain dating from 1745-57, and later factory replacements produced between 1774 and 1815.

The reconstruction project was initiated and led by Reino Liefkes, Senior Curator and Head of Ceramics and Glass, who also carried out the research to establish the original layout. Initial trial layouts showed that the table-fountain was best represented by using around 50 of the pieces. To produce a true impression of the original table display, damaged parts were conserved using standard techniques. To create accurate reproductions of the key missing sections, 3D scanning, machine tooling and printing techniques were used. This has been made possible through the collaboration of Collections (Ceramics Section), Conservation & Collections Management (Conservation, Photography and Technical Services Sections) and the Royal College of Art, London (RCA). 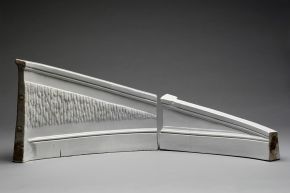 With large gaps in the design, the senior curator and conservators evaluated options to reconstruct the missing and fragmentary elements. The conservators initially considered making plaster-casts of seven of the lost elements using moulds of a nineteenth-century version of the central figure group housed in the stores of the Porzellansammlung, Dresden. However, the opportunity to scan fountain elements at the V&A, as part of the EU-funded 3D COFORM project, led to a completely new way of thinking about replacement methods for the missing sections. Instead of using standard restoration materials, the missing elements will be made in porcelain. This has the added benefit of durability and an increased resistance to dirt, considering their display without the protection of a case.

A collaboration, jointly funded by the V&A and the RCA was set up to create porcelain replacement pieces using 3D scans. Dr Steve Brown, RCA Ceramics & Glass Research Fellow, in collaboration with Professor Martin Smith, RCA Head of Programme Ceramics & Glass, has been undertaking the exacting task of turning scans into ceramic objects, creating around 20 new porcelain elements that will sit alongside and complement the originals.1 Not only were 3D scans taken to duplicate elements of the nineteenth-century Porzellansammlung group but also to replicate parts that only exist at the V&A. These include two sections of the proper left sloping wall that required extensive conservation treatment before they were scanned. They could then be mirrored in digital format to create two sections of the opposite wall (Figure 2).

For the original fountain, the main considerations for conservation treatment are the stability of individual elements and the overall balance in the appearance of the assembled pieces. The two sloping wall sections had complex conservation issues. Figure 3 shows extensive damage in the form of breaks and cracks with small losses. After reconstruction, gap-fills of colour-matched epoxy resin (HXTAL NYL-1) were used with either glass microspheres (3M™ Scotchlite™ K20 amorphous silica) or fumed silica (amorphous silicon dioxide) and dry artist’s pigments to reproduce the semi-translucent body and transparent glaze. The adjacent section was broken in fewer pieces but had a much larger area of loss. The missing area was modelled in Multi- Purpose Polyfilla® (calcium sulphate hemihydrate with cellulose ethers) and retouched with Golden® Polymer Varnish with UVLS (acrylic/styrene copolymer solution) and dry artist’s pigments to conceal the fill (Figure 4). The figure group central to the display has restorations dating from the 1970s. As these were considered stable, treatment focussed on upgrading disfiguring yellowed repairs (Figure 5). An overall level of cleaning was guided by curatorial research: marks of historic interest were retained, such as mortar used to piece the structure together and water stains indicating past use. The next part of the process is for Roger Murray, Museum Technician, to secure the object parts safely for open display. The methodology and choice of materials is being informed through his ongoing discussions with conservators.

Introducing porcelain replacement elements requires judgements on conservation ethics and aesthetics. For instance, the colour and texture of the new pieces were appraised by maker, curator and conservator to complement the original fountain. Although they will not be immediately obvious, close examination will allow the informed viewer to differentiate between the new and original pieces. In addition, conservators ensured a permanent mark will be applied to the new pieces. Documentation is important, not just to record treatment, but also to retain the reasoning behind the decisions taken. The reconstruction methods, treatment procedures and the intentional preservation of historic accretions are recorded in written, photographic and video form.

Using an innovative combination of skills, knowledge and technology, the team is reconstructing the fountain in a way that preserves its historical and aesthetic integrity. A gallery film will illustrate key stages in the restoration of this extraordinary Meissen table decoration and will bring it alive for the first time since its display at the Saxon court of Count von Brűhl.

The authors thank Victoria Oakley for her invaluable guidance and significant contribution to practical conservation work throughout the project.