UV-VIS-NIR spectroscopy: what is it & what does it do?

A spectrophotometer is an instrument which measures the reflection or absorbance characteristics of a sample. Instrument design necessitates that the wavelength of radiation to be studied must be a narrow 'window'. Accordingly, the predetermined electromagnetic radiation wavelengths for ultra-violet (uv), visible (vis) and near infra-red (nir) radiation are defined as follows; 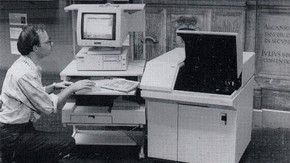 If radiation of a particular and discrete wavelength is used to illuminate a sample, then there may be an absorption of that radiation. At other wavelengths, such absorption will not occur. It is this absorption phenomenon which is used to characterise materials. Absorption of radiation may occur in a transmission or reflection mode. A graph of absorption versus wavelength is called a spectrum. It is these spectra which are most commonly encountered and discussed. The spectra can be used to determine the colour of the sample (i.e. the spectral response in the visible region), the sample's ultra-violet or near infra-red filtering characteristics (needed for evaluating the performance of solar radiation control films), or the difference in appearance between two pigments when viewed under different light sources (metamerism).

With all of these obvious advantages, it was a requisite that the V&A purchased one! The instrument chosen was the Hitachi U4001 uv/vis/nir spectrometer interfaced to a custom-built fibre optic integrating head. Hitachi instruments are marketed in this country by Nissei-Sangyo Co Ltd (contact Jerry Denton, 0734 328632). The basic instrument costs approximately £38,000 with a further £11,000 to refine the system to the Museum's particular use. The integrating head added a further £18,000 to the bill. The design of the instrument is fundamentally similar to those to be found in most chemistry laboratories through-out the world. The particular advantages of this instrument were the large sample compartment (giving greater flexibility), transportability (so that the spectrophotometer can move to the object) and, for the technocrats, a good signal to noise ratio. With the addition of the custom-designed fibre optic based integrating head, a powerful surface investigation tool has been developed.

A few more words are warranted on the design and implementation of the customised integrating head. There are many occasions when it is necessary to measure absolute colour or assess the change in colour in a material which does not lend itself to introduction to the sample compartment. (By way of an aside, during our initial discussions with Hitachi on the design of the integrating head, it was apparent that they had been approached to develop a similar product for carcass meat shippers in order that carcass colour could be fully described on the abattoir floor). This sample size problem can be overcome by the use of fibre optic leads which are interfaced to the spectrometer. It is only recently that developments in the quality of fibre optics and coating technology have made the manufacture of units with satisfactory performance over the desired wavelength range possible.

The early projects envisaged for this instrument include:

It is now appropriate to look at each of the above applications in a little more detail. If we take the first application of the assessment of solar control films, there is a direct need to ensure contractors fulfill their obligations by providing solar control films that are up to specification. The instrument is used for quality control in this instance, where a rapid sample turn round is required before contractors may commence work. The research applications of this are in the assessment of the new films and associated solar control materials which are currently entering the market or being specially designed.

Pigments are well documented as fading due to a variety of reasons. It is not altogether clear as to whether it is due to rate of change of the pigments with relation to time and, more particularly, to atmospheric contamination. We hope that the instrument will provide some cost benefit data on this area of work. The potential to include the measurement of the rate of change of colour of non-pigmented surfaces due to the action of other biological factors is also seen as a challenge for the forthcoming years.

Spectral lamp output is a subject too often left in the hands of the lamp supplier. How
many of us insist on north daylight under which we perform the necessary colour matching? What then happens to our work after it has left the studio? Frequently, we have encountered displays where the lamp colour temperature is incorrect. This can lead to metameric problems in the display of the re-touch when compared to the original. How frequently do we consider the spectral output of lamps and the change of output as a function of time? Much work on the regulation aspect of this subject is still to be completed; the physics has long been finalised.

The area which is most exciting is in the study of surface moisture by NIR (Near-infrared) spectroscopy. The relationship between rate of change of air moisture content and time to object equilibrium has not been fully described. Along with the fibre optic based integrating head the spectrometer becomes a powerful surface analysis tool well able to study this moisture question.

The study of dyes by uv/vis spectroscopy is not a novel concept. This work has been undertaken by many people in industry, several of whom have turned their attention to archaeological materials. The V&A's collections provide a wealth of new subjects in this field for study. Expertise and knowledge on a wide range of different materials can be gained using this technique.

The accompanying illustration shows the unit in use in a gallery where it is being employed to assess the rate of change of colour of a particular piece of sculpture over a number of years. Such assessments are impossible without the correct instrumentation. Full realisation of its potential will take several years. Such developments will significantly aid our understanding and access to the information locked within the collection.