An assessment of the conservation of a unicorn tapestry 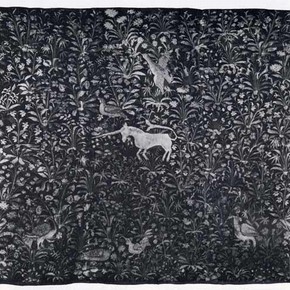 Fig. 1. The Unicorn Tapestry before conservation. Museum no. 232-1894 (click image for larger version)

The conservation of a Flemish 15th century tapestry was one of my first tasks on being appointed to the Victoria and Albert Museum in May 1988 and is now nearing completion. On my arrival, the tapestry was already on a repair frame for conservation. Several conservators from the Textiles Section had spent time on the tapestry over a period of four years although work had not progressed very far. The method chosen for repair was the traditional full linen scrim support. This entails couching weak areas with wool, replacing missing warps with specially dyed woollen yarn and strengthening slits with polyester thread. The couching stitching had been set more closely together than usual. This was to minimise the speckled look caused when dark replacement wool is highlighted against the bare, lighter coloured warps and the natural linen support.

The tapestry is an example of the medieval work known as 'mille-fleur', so called because of the profusion of plants, shrubs and flowers - and in this case small birds - included in the design. The central focus of the tapestry is a unicorn, set out on a dark blue background which has neither perspective nor a horizon line. 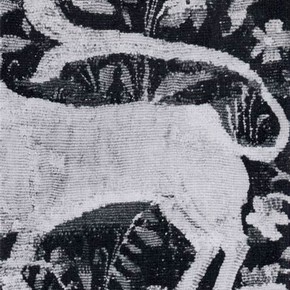 The appearance of the tapestry has been considerably altered, to its detriment, by extensive areas of reweaving throughout. Close examination of the tapestry reveals evidence of a large tear or cut which has been rejoined. There is very little left of the original weaving but in some cases original work is concealed beneath the reweaving. The wool used for the restoration (probably done in the late 19th century) was evidently dyed with an unstable aniline dye which has not only faded but changed in hue from dark blue to a billious shade of green. These rewoven areas now confuse the eye by merging elements of the design. The visual distortion is most obvious where stems, leaves and flowers become unreadable instead of being crisply shown on the original blue background.

The aim of the 'repairs' begun in 1984 was not only to support the weakened weaving structure but also to remove the worst of the 'green' reweaving, in order to bring back a degree of clarity to some of the design elements in the object. This necessitated a highly interventive and time consuming repair of the object. The reweaving has had to be painstakingly cut and stripped out. This reveals the white cotton warps used to carry the reweaving, which must then also be removed. They are replaced with new warps of wool dyed to match the original. The new warps are then couched down with two strands of wool, also dyed to match the original blue of the background. The biggest difficulty with this type of repair has been in the subjective choice of areas to be undone and conserved, and more importantly knowing when to stop. 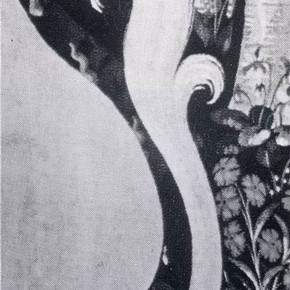 Fig. 3. Detail of a unicorn's tail from a tapestry of a similar date (click image for larger version)

The repair of the tapestry has provoked a certain amount of discussion by visiting conservators both from this country and abroad. One suggestion was to paint over the offending 'green' repairs. Another was to use dyed blue warps over a similarly dyed support. These were too close to reweaving/ restoration to be ethically viable solutions. I have, however, reservations about the method of repair chosen. As the tapestry has already received extensive reweaving, should it have been further subjected to extensive conservation repairs?

The alternatives are few. One might have been to have left the tapestry alone, simply restitching weakened slits and accepting the reweaving as part of its history. This would not have been a reasonable solution. The tapestry falls into an important group of tapestries within the Museum's collection and, from a curatorial point of view, warranted the time spent on conservation. It was accepted that the old repairs were ugly and that their total removal was undesirable but that removal in part could significantly improve the appearance of the object. 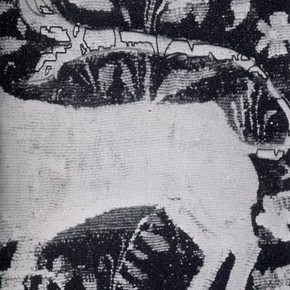 Fig. 4. Drawings made on Melinex and overlaid on photograph of tail (click image for larger version)

The central focus of the tapestry is the unicorn, itself much distorted and damaged by badly executed reweaving, resulting in a squared off rear end and a heavy tail resembling an anchor or whale's tail (Fig.2). Comparison with other unicorns makes this rendition seem highly unlikely. I looked very closely at the weaving of unicorns in two other famous sets: 'The Chase of the Unicorn' in the Cloisters at The Metropolitan Museum in New York and 'The Lady and the Unicorn' set in the Musee de Cluny in Paris (Fig.3.). Drawings were made of the unicorn's tail in the V&A tapestry and compared with photographs of tails from the other sets. The V&A tapestry is of a comparable date to the others but the weaving is not as fine so the degree of drawing the weaver could employ was limited. However, within the limitations of tapestry technique the weaver would have made some attempt at 'fronding' (separating the hairs) and it certainly would not have looked like the solid anchor shape of the reweaving. I made three tracings on Melinex (Fig.4), showing the rewoven areas and what remained of the original weaving. Lastly, after looking at the stepped slits of the original weaving, I made an educated guess at how the fronds would have looked. I stopped short of anything flamboyant and stifled my own creative impulse to redraw. The last drawing was used as a template for the couching, the result has been kinder to the unicorn and hopefully alludes more closely to the intention of the weaver (Fig.5). 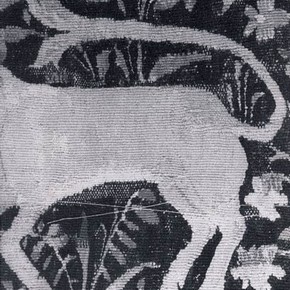 None of the problems encountered in the unicorn tapestry are unique to the field of tapestry conservation. They have simply been compounded in one object. The only aspect of the work in which I may have chosen a different technique would have been to have used a dark blue rep woven material as a support patch underneath the areas where the reweaving was removed. Rep woven material is weft faced and imitates the ridges of a tapestry weave. It has been used in the past to replace missing galloon (braid) edges of tapestries. Using the rep material would have meant less work in terms of stitching, as the rewarping and couching could have been omitted.

The blue rep, if carefully matched would have given a more solid block of colour, closer to that of the original background but still quite obvious and different from the rewoven 'green' areas. This is a technique I used successfully on the tapestries prepared for the opening of the Burrell Collection in Glasgow. It is also a method of repair used in Scandinavian museums.

For all that I am confident that when the tapestry is presented to the public in the re-opening of gallery 94 it will be much improved, the question remains: 'Could it have been better?'