Radiation sickness? An informal review of the restoration '91 exhibition in October

The pages of UKIC's Grapevine these days are a masterpiece of intimidation. Conservators who aspire to all-round professional awareness and up-to-the-minute knowledge of their own discipline could happily spend every day of the year attending conferences, symposia and meetings. A more invidious threat may have escaped the attention of most but as someone with something to sell (the Course), I am presumably a target for those who wish to sell me the opportunity to sell it. The threat I refer to is the trade fair, the public exhibition, the international, prestigious, high profile heritage conservation exposition.

I have evaded most of these events through lack of money, time and literature to distribute, but not without guilt and anxiety inspired by visions of an empty RCA/V&A stand surrounded by other courses signing up throngs of students with three degrees and twelve years experience. 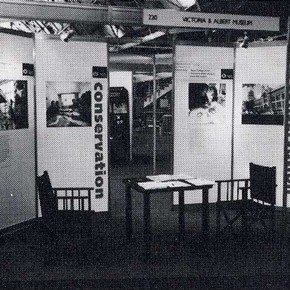 I am still unsure whether it was fortunate or unfortunate that Jonathan Ashley-Smith was able to offer a space for the Course at the RAI Restoration 91 Exhibition at the Business Design Centre in Islington between 16 and 19 October. It is worth noting that the space could have been used by members of the Department, who chose not to. In any case, the availability of a few hundred pounds from the College settled the matter. I agreed to use the space and in doing so, committed the first two weeks of term to frantic activity of dubious educational value. I apologise to the students for this and thank them for being so patient and helpful in the organisation of a tasteful and attractive stand. I am also very grateful to Frank Thurston of the RCA Photography Course, Richard Doust of RCA Graphics and Phil Elswood of the V&A Printers for their time and skills in the preparation of display material and literature.

There are many lessons to be learned about participation in such exhibitions. I understand that one exhibitor, having arrived diligently on the eve of the opening and spent several hours setting up display panels, returned on the first morning to find the whole lot on the floor. Our own display was subject to periodic, though less severe, avalanches of the same kind - an excellent demonstration of susceptibility to creep in pressure sensitive adhesives.

More important than the survival of display boards is the actual location of the stand. An anthropologist positioned in the balcony above the main floor would have been thrilled to see a very consistent lemming-like behaviour in the visitors. They arrive at one end, cast a nervous glance at the first few stands by way of acclimatisation, spend much longer than they need or intended in the middle regions and ignore the stands at the end almost entirely through boredom and fatigue. The RCA/ V&A Conservation Course stand may have been spacious and appealing, but it was also the very last stand in the exhibition. The students manning the stand and I spent a great deal of time getting to know each other rather than a public hungry for conservation information.

Actually this is an exaggeration. By the third day we had about one hundred and twenty written enquiries and requests for information. The great majority were from people involved already in conservation. Many were from students who wished to compare their course with our own or who were considering further training. For us these are useful and valid enquiries, but if the aim of the exhibition was to inspire interest from the general public, we saw no success at our end of the gallery.

The most useful aspect of the event from my point of view was the opportunity to 'network' in the traditional conference manner. The many conversations I had with the suppliers of training, skills, equipment and materials were more useful than the opportunity to sell the Course.

I do not propose to give a blow by blow, stand by stand review of the event. Some stands were professionally and expensively prepared, others were rather amateurish. I do not know how profitable an exercise it turned out to be for the exhibitors who were selling their wares or for those who wished only to sell the idea of conservation. UKIC will no doubt give a more detailed account and will review, one hopes critically, Restoration 91 with an overall view that I can not manage as a participant tied much of the time to our stand at the 'quiet end'. Some general observations, however, have to be made. The exhibition was not at any time overpopulated. Was this through lack of publicity or lack of interest? If the latter, can the public be blamed? I do not frequent exhibitions but I have periodically attended events concerned with musical equipment, photography and computers. As a profession wishing to sell itself, we are not in the same league. Of course, we are not playin the same game. Or are we?

One of our students made a comment which sadly summed up the overall character of the event. 'Well if that's the image of conservation, it's seriously boring. Surely we can do better.'