Upholstery conservation as a discipline in its own right has been rather neglected in Britain even though the history of upholstery has been studied for some years.

I was therefore encouraged by the response of Alan Cummings when I first approached him to set up a course of study which would suit my needs. The reaction of the staff at the V&A in the Textiles Conservation Section and the curatorial staff in Furniture and Woodwork left me in no doubt about their enthusiasm. I was also encouraged by conservators outside the V&A. The USA recognised the discipline some years ago, as did the Textile Conservation Centre at Hampton Court. I hope others will follow me on to the Course to build up the numbers specialising in this area. 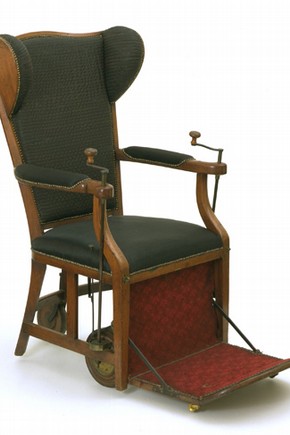 Many people think of upholstery in terms of what they can readily see when they look at a piece of furniture - the covering fabrics and the trimmings. Despite their importance to outward appearance, they reflect only a small and literally superficial aspect of the upholsterer's work. The major elements, which comprise the under-upholstery, are unseen and, though they govern form and comfort, often escape consideration altogether.

The methods developed over the centuries to create shapes which are stable and which provide comfort are many and varied. They depend on the style and type of chair and on the individual craftsmen involved. It is vital that, where a chair retains its original under -upholstery, such work should be conserved and treated with the same respect that would be shown to the frame or the top cover and its trimming.

Within the last twenty years, important pieces of the Museum's furniture have been sent out to commercial workshops, had the upholstery stripped off the frame and have been reupholstered using what are described as 'traditional' techniques. These techniques may actually be very different from those used to create the original upholstery and there is no doubt that some of these objects did retain upholstery which was original to the frame. When any part of this original construction is discarded, it means that important information has been irretrievably lost about the objects involved and the craft of upholstery in previous centuries.

Interest in the history of upholstery is increasing but there is still much information to be gathered and collated about the materials and methods used in a historical, social and geographical context. There is a need to bring upholstery into the main-stream of conservation, with the same ethics, practice and research found in other conservation disciplines.

The conservation of an upholstered object, which retains its original upholstery, involves many disciplines. While textile conservation is of primary importance, because the top cover and under-upholstery involve textiles, leather, wood and metal, gilded and other decorative surfaces may also be included. It may not be necessary for an upholstery conservator to be capable of carrying out all this work but an understanding of each area is essential, as is knowledge of historical upholstery materials and constructions.

A number of objects have been selected from the V&A collection as being suitable for a course project, one of these is an English mechanical chair approximately 1800. The inventor John Joseph Merlin is credited with introducing the idea of a mechanical chair similar to the V&A example to England from France. This type was often called a 'Gouty' chair in contemporary sketches, indicating one of the reasons for its popularity. The development of the design can be traced through records of firms producing such chairs like Gillow & Co. and through surviving examples, including one very similar at Hardwick Hall. It is possible that this chair retains most of its original upholstery construction, although at some time an attempt has been made to support the seat upholstery. The chair is covered in two designs of horsehair fabric. The cover on the inside back and wings is striped and probably original to the chair; the seat and arm pads have been re-covered in a satin weave horsehair. The finish is close nailing with plain decorative nails, those on the inside back and wings appear to be original.

The original horsehair fabric has contracted and split. An attempt has been made to repair the splits by placing lengths of webbing over the upholstery and immediately under the top cover. Gaps in the top cover have been filled with black paint. The horsehair is too brittle to be conserved using traditional stitching methods; the horsehair needs to be relaxed and an adhesive method adapted in order to sup-port the damaged areas. Parallel work and some research have been carried out on inflexible and brittle raffia in the Organics Conservation Laboratory of the British Museum; it is possible that this research could be expanded to devise a method to treat the Gouty chair.

Under the Department of Education and Science rules I do not qualify for an RCA Bursary; it was therefore necessary to look for outside funding primarily to cover fees and maintenance. Of the many organisations approached two have been able to offer financial support. The Cultural and Educational Trust of the British Antique Dealers Association have granted me a bursary of £1,000 towards fees, for each of the two years. The Friends of the V&A have generously awarded me £5,000 for this year towards maintenance. I would like to thank BADA and the Friends of the V&A for showing their understanding of the importance of this field of conservation by generously supporting me in my studies.