Corrosion of metals associated with wood 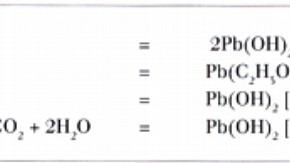 The reactions for lead may be: (click image for larger version)

Wood and metal are used together for so many purposes that they are usually regarded as highly compatible materials. However, interactions between certain metals and woods can take place under adverse conditions, or as a result of using unsuitable materials. Such interactions can occur through direct contact of metal fastenings and fittings with wood or indirectly, through the environment when metal objects are transported, stored, or displayed in wooden containers. This has long been known but is still sometimes forgotten. Damage to metal objects in the Burrell Collection was reported during the day on Storage at the UKIC conference, Restoration '91. This article briefly reviews ways in which wood may contribute to the corrosion of metal objects. 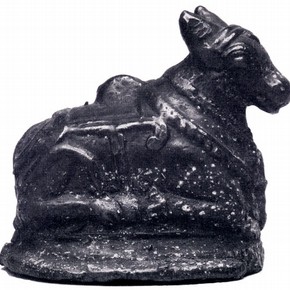 The object is a 19th Century bronze statue of Nandi, the Kneeling bull of Shiva. (Museum no IM 69-1914) (click image for larger version)

Corrosion is essentially a process of oxidation. For most corrosion processes the presence of moisture and oxygen at the metal surface is essential although the atmosphere need not be water saturated. At lower humidities, however, the rate of corrosion progressively diminishes. ‘Safe’ limits are set in the Museum at 40%-45% RH for unstable iron and bronzes containing chlorides and 55% RH for good quality iron and bronzes with stable patinas.

Wood can act as a source of water for corrosion processes. Under stable conditions an equilibrium is reached in which water is distributed between air and wood in certain definite proportions. The position of equilibrium depends on the relative humidity and temperature of the surrounding air, and on the wood species. At 20°C and 55%RH both a cubic metre of air and a 6 cm cube of wood contain about 10 ml of water. Increasing the temperature causes a reduction in the moisture content of the timber and an increase in the relative humidity of the surrounding air.

Consequently, increasing the temperature of a sealed wooden container can lead to an increase in the relative humidity inside it.

The approximate moisture content of wood that will produce a relative humidity of  80% inside a wooden container over a range of temperatures is shown in the graph below.

Temperatures of 40-50°C may be reached in wooden boxes exposed to the sun in this country, while the air inside boxes in a tropical climate may reach 70°C. It is therefore important that any wood used should have a suitable moisture content and that steps are taken to minimise temperature variations in service. 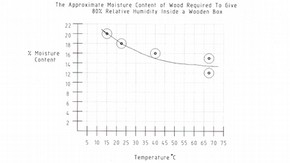 Besides moisture, many woods contain volatile alcohols, esters, and oils that have a solvent action on some protective coatings applied to metal objects, thereby making the metal more susceptible to the effects of moisture or other chemicals.

Examination by Farmer1  in 1962 of cadmium plated radio sets that had corrode in storage showed that corrosion had been caused by the birch wood in their cabinets rather than by other materials present. Many species of timber can produce small amount of volatile corrosive substances and this is more pronounced under warm, damp conditions. These substances include many molecular weight carboxylic acids particularly acetic and formic acids. The tendency to cause corrosion under these conditions is not directly related to the acidity of the wood and its pH value is not a reliable guide to the extent of corrosion that it might cause.

Farmer measured the amount of free acid produced by various woods under controlled conditions at intervals up to two years. For all timbers examined, including oak, Douglas fir, Sitka spruce, beech, birch, obeche and Parana pine, there was a progressive increase in free acid. More than 90% of the acid was volatile and was identified chemically and chromatographically as acetic acid.

The rate at which acetic acid is liberated depends on the chemical constitution of the wood from which it is derived. This varies with species and largely accounts for the considerable differences in rates of production of acetic acid between timbers. The proportion of acetyl groups capable of liberating acetic acid is higher in hardwoods than in softwoods. In practice, kiln dried wood is much more likely to cause corrosion than air dried wood.

Most metals are attacked by acetic acid, which can cause corrosion at concentrations as low as 0.5 ppm in air. Serious damage can occur through long-term storage, especially in damp conditions. Lead objects can be rapidly destroyed by being stored in cases made of wood, the lead being converted into lead carbonate. Zinc and bronze are also affected but not as strongly as lead. 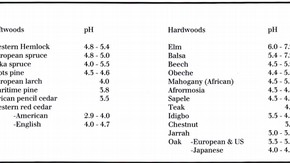 In equation 4, acetic acid (4C2H4O2 ) is released and is therefore free to participate in equation 2. In this way a small amount of acetic acid may do much harm. This suggests that it is unwise to leave corrosion products in contact with the metal since further attack may then be possible even when the object is removed to a wood-free environment.

Since the liberation of acetic acid is the result of a normal chemical process, and not for example biological, it is unlikely that any practical means of preventing it will be found. It is therefore necessary to concentrate on preventing the acid formed from reaching objects that may be corroded by it. Inclusion of basic substances in the package to absorb and neutralise acetic acid has been examined but is not effective because acetates formed are themselves unstable and decompose to liberate acetic acid. Lining of boxes with an impervious material seems the best approach. Aluminium leaf between a filler and shellac undercoat and two coats of carefully selected varnish or enamel seems effective if rather expensive. Polythene is not effective. Though wood has many advantages its use may have to be abandoned for sensitive materials.

For some metals, the extent of corrosion is limited by the formation of an oxide or hydroxide surface layer. In these cases, corrosion may be accelerated by the presence of acids and certain salts that increase the solubility of the primary corrosion product. The aqueous extracts of most common woods are acidic and can act in this way. Acidity in wood results from complex mixtures of organic acids and their salts. Sugar acids formed by hydrolysis of hemicelluloses are strong acids and their salts are soluble in water and neutral solutions. When salts are present that can act as electrolytes, the chemical reactions that cause corrosion are reinforced by electrochemical reactions and mineralisation is greatly accelerated.

Information on the acidity of wood can be obtained by preparing a suspension of wood particles in distilled water in the proportion of five parts of water to one of wood. The pH of the suspension is measured with a glass electrode pH meter. This does not provide an accurate measure of the true pH of the moisture in the wood because of the large dilution effect involved in preparing the sample for measurement. Such measurements do, however, give useful information on the relative degrees of acidity of different woods. For practical purposes, a pH of 4.0-4.3 represents the limit below which the rate of corrosion of steel increases rapidly in the presence of moisture. The measured pH values of some common timbers are given in the table of contents.

Oak, sweet chestnut, Western red cedar and Douglas fir are the woods most commonly associated with corrosion of metals in contact with them under damp conditions. Iron and steel are much more susceptible to the corrosive influence of wood than aluminium, copper or brass.

The rusting of iron is frequently accompanied by deterioration of the wood immediately next to it. Wood in contact with actively rusting iron suffers a loss in tensile strength but its compressive strength is unaffected.

Sometimes, corrosion of metals occurs in contact with woods that are not unduly acidic and this is often due to the presence of common salt. For example, salt can promote bi-metallic corrosion of nickel plated steel and coppered iron. Cases have been observed where alkali produced by the corrosion of coppered iron nails holding canvas to a wooden frame has caused rotting of the canvas. Salt is not a normal constituent of wood but it can be introduced into wood by logs being floated to the sea or being exposed to sea spray. Also, in North America, a salt seasoning process is used for drying certain hardwoods including maple.

There are also specific reactions that occur between particular timbers and metals. For example, Western red cedar contains tropolones that react with metallic copper to form a stable chelate that appears as a green coating on the metal.

Recognition of interactions such as those described has led to the search for more passive materials for the construction of sealed environments, particularly for
permanent displays. However, the circumstances under which wood and metal can come together and interact are many and varied, and vigilance is required to prevent damage. It is hoped that this short paper will help to keep this problem in focus.