What is 3-carene? A question few people in the museum world have had to ask themselves, until recently that is. As part of the EC funded Assessment and Monitoring of the Environment of Cultural Property (AMECP) project (see V&A Conservation Journal no. 5, October 1992 for a full description of this project), the V&A has begun a programme of analysis on compounds present in the air inside museum galleries and display cases. A significant portion of this work deals with the identification of volatile organic compounds (VOCs). A large number of VOCs are present in air and the programme of study will provide information on the type and levels of these compounds. Good detective work will generally indicate the source of these compounds. 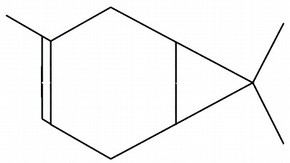 One of the more unexpected discoveries to date, was the detection of a substance called 3-carene. This is a rather unusual molecule which, when drawn on paper, looks like a one-legged beetle (see image, right).

As yet we are uncertain as to the origin of this species, but Jonathan Ashley-Smith has been able to look it up in a 1920s chemical textbook. He found it to be a constituent of Swedish pine needles. It is just this type of substance that is used as the raw material for the production of turpentine. A likely explanation is that 3-carene, as a constituent of turpentine, is slowly evaporating from a number of paint pots stored in the room where the compound was detected. Even with the lids sealed there is sufficient evaporation from the pots to give a strong signal for the compound.

Further air analyses, this time in galleries, have also shown the presence of 3-carene. Paint applied during recent decoration is likely to be the source in this instance. The AMECP project work continues and 3-carene will not be the only interesting molecule to be found. In addition to VOCs the project will also be profiling inorganic species such as sulphur dioxide and nitrogen oxides present in internal atmospheres. This study will provide detailed knowledge of these environments. A further aim is to produce a glass based sensor such that a wider body of data will be produced that will reflect the possible synergistic effects of that environment.

As this project proceeds, further articles will be forthcoming. An interim presentation is to be made at the September 1994 IIC Ottawa meeting.